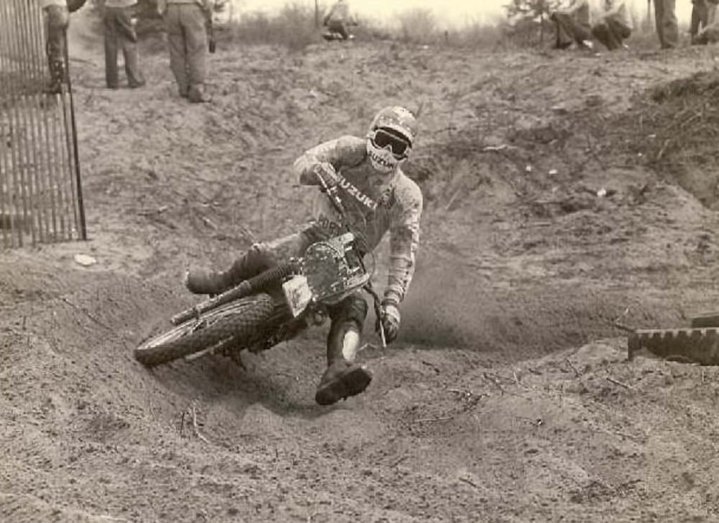 This story first published in Inside Motorcycles, issue 1303, 2010.

Social networking sites such as Facebook, MySpace and Classmates.com have revolutionized life in the 21 st century. Whether they have made life better is certainly open to debate, but there’s no question about one thing. In less than a decade, these Internet-based mediums have also significantly impacted the world of motorcycles, and the very sport of motorcycling.

Claude Giguere, of Okotoks, Alberta is certainly aware of the power of Facebook. He recently joined, and has reconnected with plenty of his Manitoba motocross-racing friends. However, when he became aware of the site, he wasn’t so sure. “When I first heard about Facebook, I thought it was just a bunch of young kids yakking and updating their status every two minutes,” Giguere said. “But my kids were talking about Facebook, and I eventually got onto it. I found a few friends I went to school with, and some of my old racing buddies.”

One of those buddies was MX champ Kim Houde. He was tagged in a photo of a Thunder Bay, Ontario, race and that sent Giguere digging through other pictures. “I’m clicking through theses pictures, and I’m going, holy crap, that’s me!” Giguere says. He found himself in a few images posted by other motocross racers, and that got him started thinking about putting together a Facebook group – one dedicated to all of Manitoba’s motorcycle racers.

He wasn’t too daunted, as Giguere had experience putting together a website page where he’d uploaded several hundred pictures of his motocross racing days dating back to the mid-1970s.

In 1972 Giguere started riding a minibike, specifically a Keystone powered by a 3.5 horsepower Tecumseh engine. He was born and raised in Winnipeg, but lived on an acreage just outside the city’s Perimeter Highway. “I was the first guy to get a minibike, and then everybody started to get one – small Hondas or Rupps,” Giguere says. Life was good. Giguere and his group of friends got to ride around the acreages and on the gravel roads – he says nobody ever bothered them.

Giguere’s next bike was a 1974 Yamaha MX100, his first true ‘motocross’ machine. When school buddy Kim Houde found out he had a MX capable ‘cycle Houde immediately suggested the 16-year old Giguere get out on the track. “After he found out I had a motocross bike he kept bugging me because I was eligible for the Schoolboy class,” Giguere says. 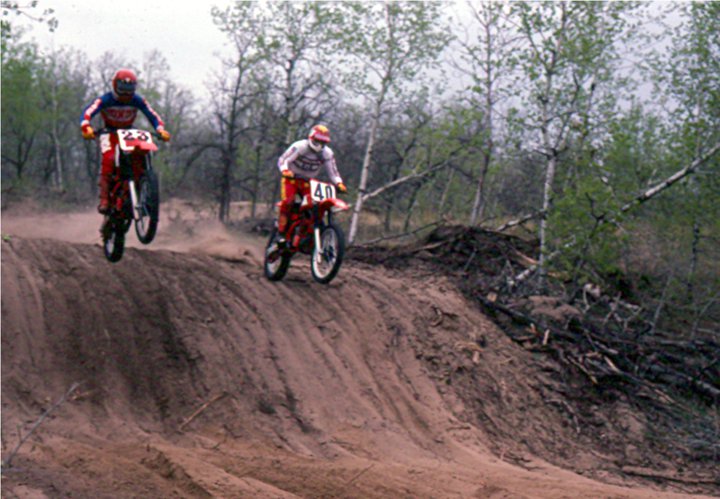 So, Giguere and another friend loaded up their bikes and headed to Miami, Manitoba (70 minutes southwest of Winnipeg) where there was a motocross track built on top of an escarpment. Giguere recalls starting dead last because he didn’t want to be in anybody’s way in the first corner. But after a few laps he found himself in the lead – until his handlebars came loose and he had to pull off the track. He’d lost the crown nut for his forks, walked back out on the track and found the missing item, put it back together and went out for the second moto. He placed second in the race.

“After that, I was hooked,” he says. In 1975 Giguere bought a used Honda 125 Elsinore. He was able to afford his new passion because he always had a job, either helping his dad who was a beekeeper, or helping neighbours work their greenhouses. And that’s when he started to get a bit more serious about racing.

“A friend told me they’d put together a motocross track on a nearby old dairy farm,” Giguere recalls. “The farmer had front end loaders and helped build up a track.” Giguere would ride his Honda from his parent’s house to the track, and he did that every evening for months. Do it enough, and you’ll get good.

“I was getting faster and faster,” Giguere says. “When I raced my first 125 Junio (now Novice) event I was so fast and won the race they moved me up to Senior (now Intermediate).”

Giguere had a great year in 1976 campaigning a Yamaha YZ125. He won plenty of races and moved up to Expert (now Pro). He spent 1977 racing in Expert class, and late in the year he went to work for Alfred Nunn of Austin Sports. Nunn wanted to open a satellite Suzuki shop in Portage la Prairie, and he tapped Giguere to basically run a one-man show, looking after sales and service. While working for Nunn, Giguere was given two bikes to ride – one of them was a Suzuki RM125. He did well aboard the Suzuki, but crashed hard in 1978 and was on crutches for several weeks.

After the crash he quit the Suzuki gig in Portage la Prairie and moved back home. While there he got a call from Riteway Sports, and was offered a job to work at the number one Yamaha shop in Manitoba. Again, Giguere was given machines to race, now YZs. All through this period Giguere and his friends (there was quite a crew of them, often referred to as the Manitoba wild bunch) would travel to tracks in Thunder Bay, Minneapolis, Saskatoon or Regina to race, and if they weren’t motocrossing they were battling it out on half-mile dirt tracks or on ice.

Giguere started a welding course in 1980, and by 1981 he was employed by CP Rail as a boilermaker’s apprentice. He’s still working for CP, but was transferred to Calgary in 1997. Giguere continued to race motocross off and on for several years, but says, “In 1978, ’79, ’80 and ’81 the top three riders were Kim Houde, Don Gill and myself.”

Cross-country and enduro racing followed, and he still likes to get dirty and even greasy, as he’s collecting and restoring motocross machines similar to those he used to race. Amongst a number of Yamahas he’s got a 1974 MX100, and a 1978 Kawasaki KX250 and a 1981 Suzuki RM125.

While he’s having fun in the garage he’s also having just as much fun with his computer. After setting up the Manitoba Motorcycle Racing Facebook page in December of 2009 the number of members grew exponentially. It started off with 25 or 30 members, and climbed to 130 in less than two weeks. There are now some 193 members, and more than 1,200 pictures of Manitoba racers and events on the group page.

“Facebook is free to join and peruse,” Giguere concludes. “(The group page) has brought a whole bunch of guys back together that we haven’t seen or heard from for a while. I just think the whole global Internet thing is so cool.” 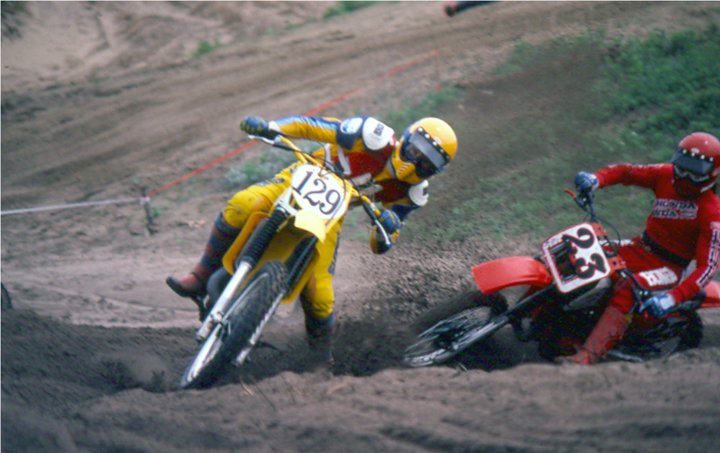