My main area of interest is automotive and motorcycle journalism. A column appears in Postmedia/Calgary Herald’s Driving.ca . The column is titled ‘On the Road’. For ten years I wrote monthly columns, titled ‘Western Perspectives’, in Inside Motorcycles — a Canadian publication. And, for four years after that I  penned the New Old Stock vintage column for Canada’s longest publishing motorcycle magazine, Cycle Canada. The state of the publishing industry has changed, however, and Cycle Canada is now online-online. Feature articles used to run monthly in American Iron Magazine, the No. 1 motorcycle magazine on the newsstands, but it’s defunct now. Thankfully, Motorcycle Classics magazine is going strong, and features appear in their pages on a regular basis, and I also contribute Pulp Non-Fiction, a column where I dissect pieces of vintage motorcycle literature, in the Antique Motorcycle, the publication of the Antique Motorcycle Club of America. As of 2020, full length features appear at TheVintagent.com.

I was recognized with the 1997 MAX Award for Motorcycle Journalism — awarded for an article published in the Oct. 1996 issue of the U.K. based magazine The Classic Motor Cycle regarding British motorcycle legend Bernie Nicholson. Book ending that award was another MAX Award, given for my publication Prairie Dust, Motorcycles and a Typewriter: The story of Bernie Nicholson and Modern Motorcycle Mechanics. I was also recognized with the Castrol Chinthe Award for Automotive Journalism in 2003 and the Julie Wilkinson Motorsports Award for Excellence in Journalism in 2009.

An avid enthusiast of vintage British motorcycles, I completely restored a 1946 Velocette MAC 350 c.c. single-cylinder machine in late 2003 and early 2004. I also own a complete, original and unrestored 1939 Triumph Speed Twin. The Triumph belonged to Bernie Nicholson, and still wears the patina obtained in the years Bernie owned the machine.

Many years have been spent traversing both Canada and the U.S., collecting and documenting vintage motorcycle and automotive events and stories — some of which have appeared in The Classic Motor Cycle, Walneck’s Classic Cycle Trader, Motorcycle Cruiser, Canadian Biker, Motorsport Dealer and Trade, and many others.

I also test drove and wrote features of new vehicles, with articles appearing in the Herald’s Driving.ca section. I contributed a luxury auto column, called On the Road, to Calgary Inc. Magazine.

That changed in 2004, when I crashed my motorcycle, a 1978 Suzuki GT750. (See my post Inside Motorcycles, Western Perspectives for more on this.) The accident has left me a paraplegic, and reliant on the use of a high-end titanium wheelchair.

Thankfully, I can still write, and will continue to do just that. 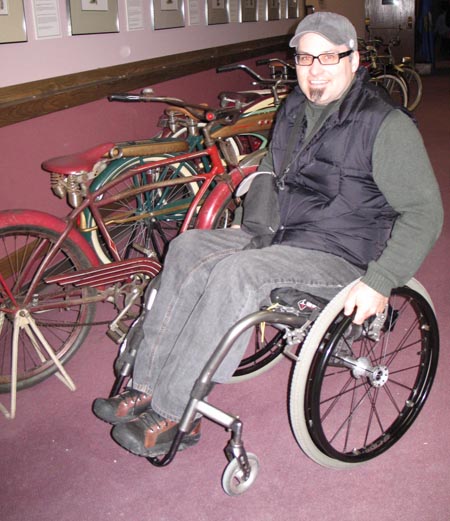 That’s me, hanging a wheelie in my chair, at the
Military Museums in Calgary. The occasion was the
Bow Cycle bicycle collection, on display Feb. 15 to 19, 2007. 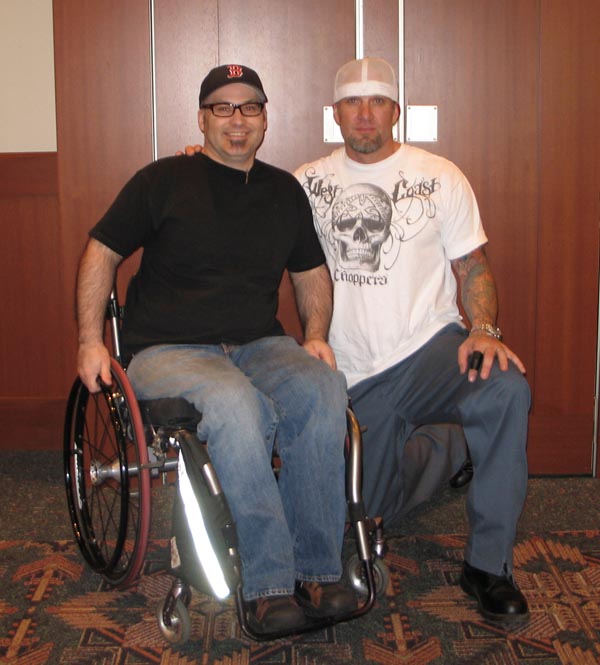 …and that’s me with Jesse James at the King of Customs Motorcycle Show in Calgary in mid-May, 2008. 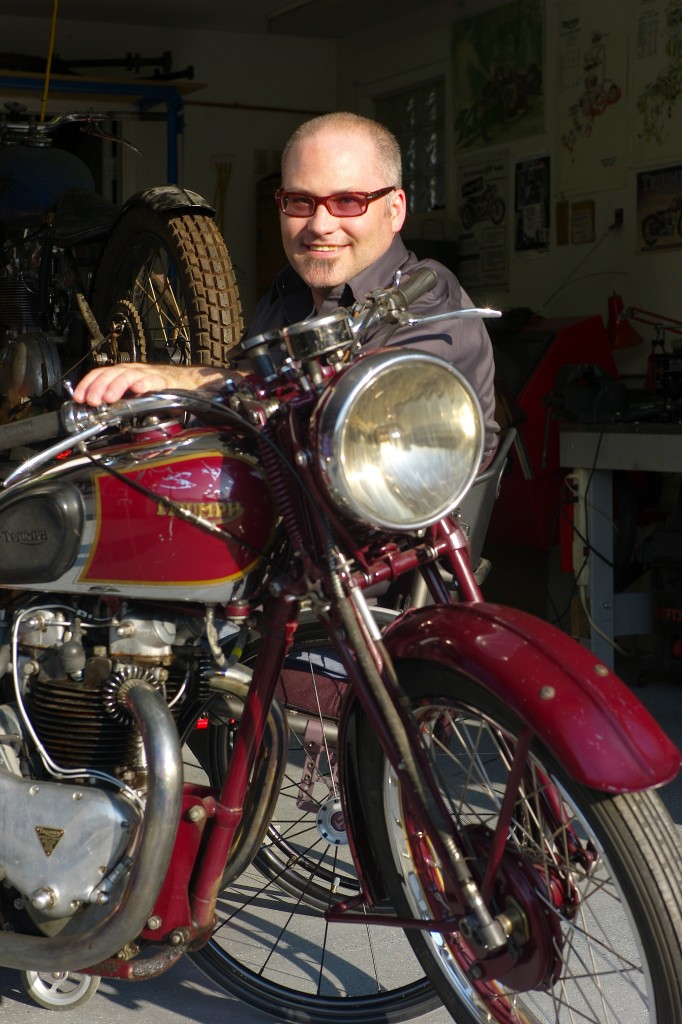 Photo courtesy Greg Fulmes. Your host with an unrestored 1939 Triumph Speed Twin. Note to enthusiasts, that’s not the correct front hub, nor the right fork for that year Triumph.