This feature first appeared in Canada’s Inside Motorycles, April 2009.

All photographs are courtesy Amee Reehal. 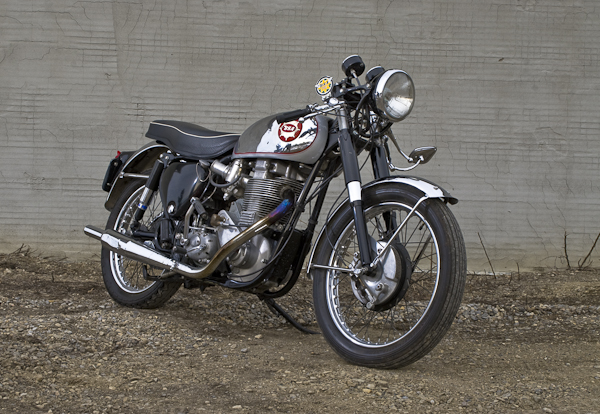 In its heyday Britain’s motorcycle industry was famous for producing single cylinder machines.

Every major maker, from B.S.A. to Velocette, offered a single in its range. Some of the big, powerful singles were simple workaday machines, and often pulled a sidecar. Others, however, were built for more lively action. Such is the case with the B.S.A. Gold Star.

B.S.A. named their Gold Star after the star-shaped gold metal badge awarded to racers who lapped Brooklands track at speeds faster than 100 mph. In 1937 racer Wal Handley took a B.S.A. Empire Star to a 107.5 mph lap — and B.S.A. decided to take advantage of the marketing opportunity.

Manufactured between 1938 and 1963 the Gold Star was available with either a 350cc or a 500cc power plant. Each engine was assembled by hand, and it was an impressive-looking all-alloy motor with overhead valves. Each unit was tested on a dynamometer before dispatch, and a Gold Star buyer was given the printed results so they were aware of their machine’s full horsepower potential (around 38 h.p. for the 1958 machine featured here). That was quite a figure back then, and the Gold Star would have been today’s Suzuki Hayabusa or Honda CBR1000RR.

Gold Star models are recognizable by their alphanumeric designations. There were only 500 Gold Stars built in 1938 and 1939, and production didn’t pick up post-War until 1949. Gold Stars built from 1949 to 1952 were ZB32GS (the 32 denotes the 350cc version) and ZB34GS (here, the 34 denotes the 500cc ‘cycle). In ’53 they were prefixed BB (as in, BB32 or BB34GS). An improvement in handling was gained that year when the frame became fully suspended, with a swingarm and twin rear shocks. Then, in 1954, there was the CB, and in 1955 the DB series debuted. A redesigned cylinder head was introduced in 1956, and after that all Gold Stars were either DBD32GS or DBD34GS. Among Gold Star enthusiasts, it is the DBD models that generate the most interest. 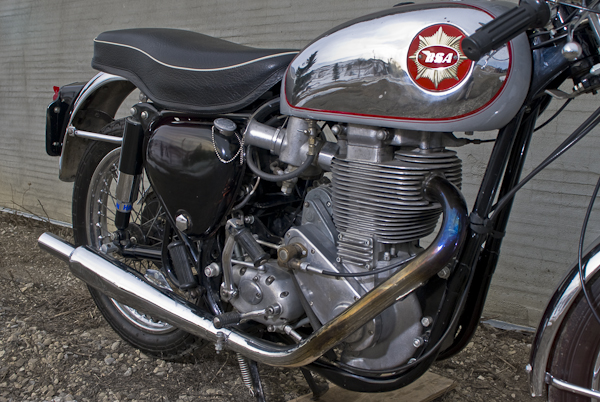 Calgary motorcyclist and collector Charles Bruce almost lost interest in two-wheelers after his first adventure in riding. He says he wanted to look cool with a leather jacket and a motorcycle, so Bruce and a friend went half on an ex-Army surplus Harley-Davidson 45. The machine had a suicide clutch and a hand shift, and Bruce didn’t like the ride. But he was willing to give motorcycles a second chance, and in 1967 he’d been working in Nakusp, B.C., when he saw a motorcycle shop in nearby Castlegaar was auctioning off some machines. He had an entire month’s pay — $300 — in his pocket and went to buy a Honda 305 Scrambler. It sold for more than $300, and that’s when a tired looking 500cc B.S.A. rolled onto the auction block.

“I remember a kid riding a big single-cylinder bike up Centre Street hill (in Calgary), and always loved the sound that bike made,” Bruce says. “So when the B.S.A. came up, I thought that might be neat.”

So, he bid, and for $275 he was the owner of what was titled as a 1961 B.S.A. DBD34GS Gold Star. Later, Bruce learned the Gold Star was a 1958 model, and had probably been raced for three years before being titled for road use. The bike was missing the left hand foot peg, and had 10″ apehanger handlebars and a red-painted light bulb for a taillight. With the $25 Bruce had left over he bought a cat-face tail light lens to cover the bulb, ordered a foot peg and a set of low handlebars. He did manage to ride the B.S.A. home that day, where he took it apart and waited for the parts to arrive. One week later, he collected his pieces and put the Gold Star back on the road. Bruce rode the motorcycle for the rest of 1967 and into 1968, but after that the bike was parked and taken to pieces.

He sent the motor to Nicholson Bros. Motorcycles in Saskatoon where the bottom end was rebuilt, and the head was worked over. Once Bruce got the motor back he didn’t go much further with the Gold Star. In fact, in 1985, he sold the Gold Star to a friend. During this time a number of parts were sourced including a larger four-gallon gas tank to replace the original two-gallon unit, and the special rear set footrests were found. Before any major work was completed, however, Bruce’s friend wanted to sell the Gold Star.

“My wife thought I was having an affair, I was so distraught about the Gold Star being sold,” Bruce says. “She said I was moody and wasn’t talking much.” So in 1987 he bought the Gold Star back, and for the second time put the machine on the road. Now in clubman trim, the Gold Star features the rear set foot pegs and the low, clip on handlebars that give the motorcycle its racing stance.

A special Eddie Dow (Dow was a U.K. Gold Star guru) 8″ twin-leading shoe front brake was sourced and installed. The machine is fitted with a racing RRT2 close-ratio gearbox, modified with a different first gear and a Triumph four-spring clutch. With the racing first gear in the ‘box, Bruce had to slip the clutch up to 50 mph just to get underway. Now, he can at least get started, but there’s a big gap between first and second gears.

Bruce researched his Gold Star through the Gold Star Owner’s Club, and they were able to confirm his engine was tested on B.S.A.’s dyno on Jan. 24, 1958, and released for sale Feb. 3, 1958. The bike went to Deeley’s in Vancouver. Bruce is almost positive the machine was a racer, as it has a special tab welded on the frame that would have held a centre mounted oil tank. That telltale tab would not have been part of a stock Gold Star frame. Gold Stars are rather famous for the muffler that is fitted, which is little more than a megaphone with a special cap welded to the end. The engine exhaust note will ‘twitter’ on the overrun.

Bruce doesn’t ride the Gold Star in the city, preferring to exercise it out on open country roads where he can back off the throttle and enjoy the tunes. Of the exhaust note, he says, “It does sound like a bird in a cage, it really does twitter.” 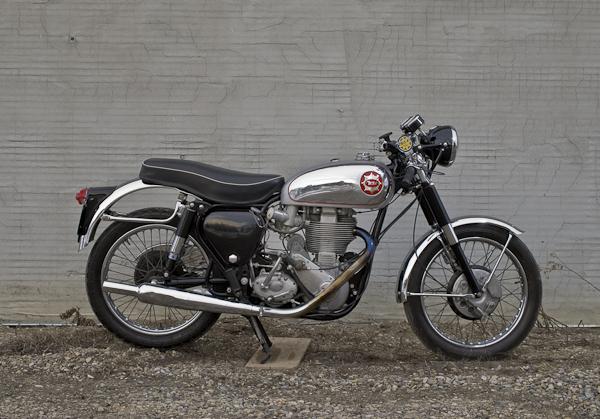