If the text is too hard to read, the story follows in its original format. Sorry about the poor quality of the scans. 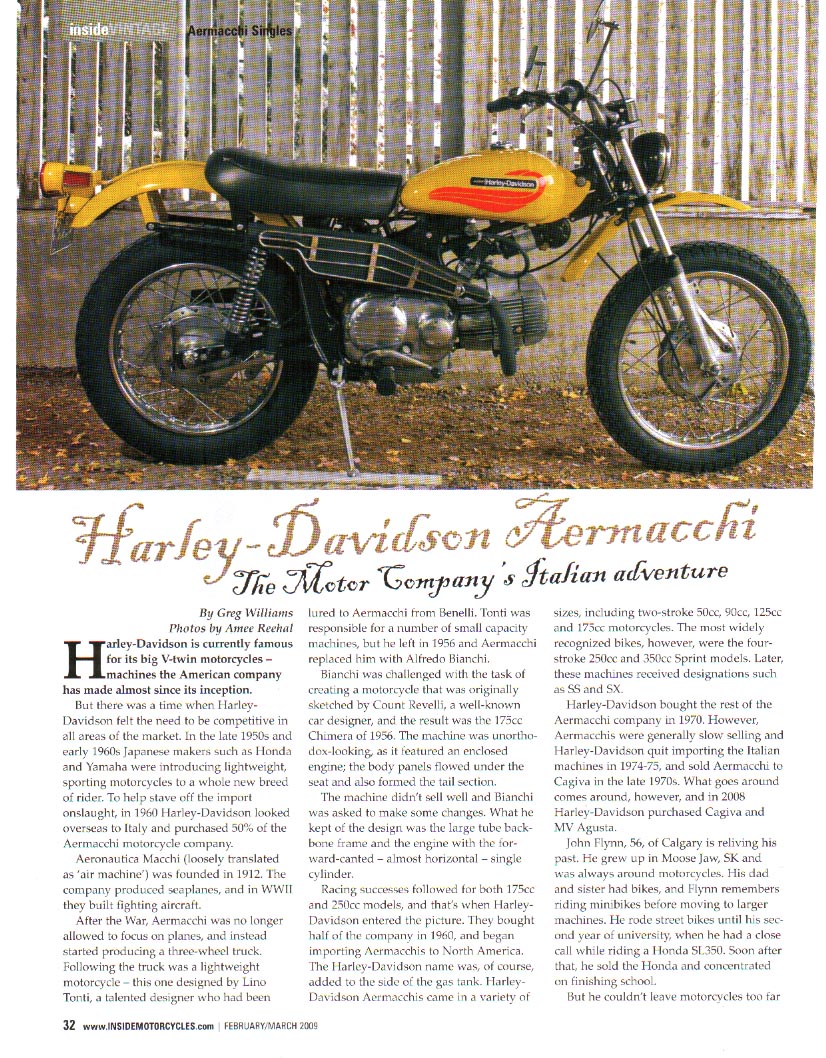 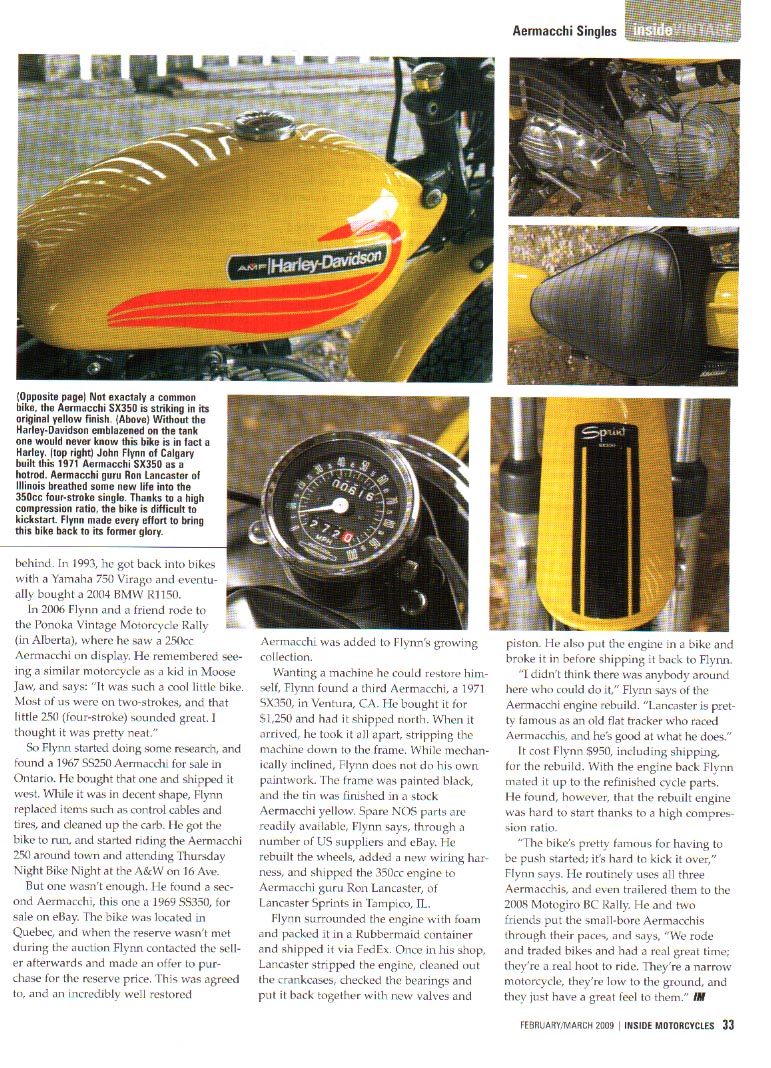 Harley-Davidson is currently famous for its big V-twin motorcycles — machines the American company has made almost since its inception. But there was a time when Harley-Davidson felt the need to be competitive in all areas of the market. In the late 1950s and early 1960s Japanese makers such as Honda and Yamaha were introducing lightweight, sporting motorcycles to a whole new breed of rider. To help stave off the import onslaught, in1960 Harley-Davidson looked overseas to Italy and purchased 50 per cent of the Aermacchi motorcycle company.

Aeronautica Macchi (a loose translation would be ‘air machine’) was founded in 1912. The company produced seaplanes, and in WWII they built fighting aircraft. After the War, Aermacchi was no longer allowed to focus on planes, and instead started producing a three-wheel truck. Following the truck was a lightweight motorcycle — this one designed by Lino Tonti, a talented designer who had been lured to Aermacchi from Benelli. Tonti was responsible for a number of small capacity machines, but he left in 1956 and Aermacchi replaced him with Alfredo Bianchi.

Bianchi was challenged with the task of creating a motorcycle that was originally sketched by Count Revelli, a well-known car designer, and the result was the 175cc Chimera of 1956. The machine was unorthodox looking, as it featured an enclosed engine; the body panels flowed under the seat and also formed the tail section. The machine didn’t sell well and Bianchi was asked to make some changes. What he kept of the design was the large tube backbone frame and the engine with the forward-canted — almost horizontal — single cylinder. Racing successes followed for both 175cc and 250cc examples, and that’s when Harley-Davidson entered the picture. They bought half of the company in 1960, and began importing Aermacchis to North America. The Harley-Davidson name was, of course, added to the side of the gas tank. Harley-Davidson Aermacchis came in a variety of sizes, including two-stroke 50cc, 90cc, 125cc and 175cc motorcycles. The most widely recognized bikes, however, were the four-stroke 250cc and 350cc Sprint models. Later, these machines received designations such as SS and SX.

Harley-Davidson bought the rest of the Aermacchi company in 1970. However, Aermacchi’s were generally slow selling and Harley-Davidson quit importing the Italian machines in 1974-75, and sold Aermacchi to Cagiva in the late 1970s. What goes around comes around, however, and in 2008 Harley-Davidson purchased Cagiva and MV Agusta.

John Flynn, 56, of Calgary is reliving his past. He grew up in Moose Jaw, Saskatchewan, and was always around motorcycles. His dad and sister had bikes, and Flynn remembers riding minibikes before moving to larger machines. He rode street bikes until his second year of university, when he had a close call while riding a Honda SL350. Soon after that, he sold the Honda and concentrated on finishing school. But he couldn’t leave motorcycles too far behind. In 1993, he got back into bikes with a Yamaha 750 Virago and eventually bought a 2004 BMW R1150.

In 2006 Flynn and a friend rode to the Ponoka Vintage Motorcycle Rally (in Alberta), where he saw a 250cc Aermacchi on display. He remembered seeing a similar motorcycle as a kid in Moose Jaw, and says: “It was such a cool little bike. Most of us were on two-strokes, and that little 250 (four-stroke) sounded great. I thought it was pretty neat.”

So Flynn started doing some research, and found a 1967 SS250 Aermacchi for sale in Ontario. He bought that one and shipped it west. While it was in decent shape, Flynn replaced items such as control cables and tires, and cleaned up the carb. He got the bike to run, and started riding the Aermacchi 250 around town and attending Thursday Night Bike Night at the A&W on 16 Ave.

But one wasn’t enough. He found a second Aermacchi, this one a 1969 SS350, for sale on eBay. The bike was located in Quebec, and while the reserve wasn’t met during the auction Flynn contacted the seller afterwards and made an offer to purchase for the reserve price. This was agreed to, and an incredibly well restored Aermacchi was added to Flynn’s growing collection.

Wanting a machine he could restore himself, Flynn found a third Aermacchi, a 1971 SX350, in Ventura, California. He bought it for $1,250 and had it shipped north. When it arrived, he took it all apart, stripping the machine down to the frame. While mechanically inclined, Flynn does not do his own paintwork. The frame was painted black, and the tin was finished in a stock Aermacchi yellow. Spare NOS parts are readily available, Flynn says, through a number of U.S. suppliers and eBay. He rebuilt the wheels, added a new wiring harness, and shipped the 350cc engine to Aermacchi guru Ron Lancaster, of Lancaster Sprints in Tampico, Illinois.

Flynn surrounded the engine with foam and packed it in a Rubbermaid container and shipped it via FedEx. Once in his shop, Lancaster stripped the engine, cleaned out the crankcases, checked the bearings and put it back together with new valves and piston. He also put the engine in a bike and broke it in before shipping it back to Flynn.

“I didn’t think there was anybody around here who could do it,” Flynn says of the Aermacchi engine rebuild. “Lancaster is pretty famous as an old flat tracker who raced Aermacchis, and he’s good at what he does.” It cost Flynn $950, including shipping, for the rebuild. With the engine back Flynn mated it up to the refinished cycle parts. He found, however, that the rebuilt engine was hard to start thanks to a high compression ratio.

“The bike’s pretty famous for having to be push started; it’s hard to kick it over,” Flynn says. He routinely uses all three Aermacchis, and even trailered them to the 2008 Motogiro B.C. Rally. He and two friends put the small-bore Aermacchis through their paces, and says, “We rode and traded bikes and had a real great time; they’re a real hoot to ride. They’re a narrow motorcycle, they’re low to the ground, and they just have a great feel to them.”