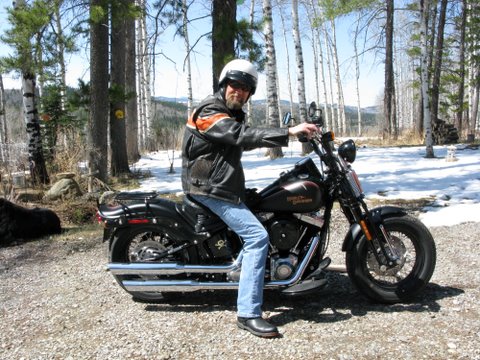 This piece first ran in the Calgary Herald’s Driving section, Friday May 15.

All photographs are courtesy Chris Crump.

Back in the 1930s and 1940s some motorcyclists would remove bits and pieces from their stock machines.
They were effectively paring away excess weight, and they’d make changes by putting on a smaller headlight, ditching the front fender and cutting or ‘bobbing’ the rear fender.
Those in the motorcycling fraternity referred to these early custom machines as ‘bobbers’.
What goes around comes around.
Ten years ago, the custom rage was for a mile-long front end, a stretched frame and a super wide rear tire. Today, bobbers have returned as the popular custom of choice. Sometimes, simpler is better.
And Harley-Davidson gets that.
Last year, the Motor Company introduced their own factory bobber, the Cross Bones, a machine that comes from their Softail family of motorcycles. The Cross Bones returns in their 2009 lineup, and we were able to get Calgary motorcycle enthusiast Chris Crump out for a daylong test ride.
Crump, 51, was born in Bermuda but raised in Regina, Sask. He bought his first brand new motorcycle in 1974, a Honda CB360 — and he worked two or three jobs to pay for the ride.
“The bike was all round transportation for me,’ Crump says. After a bad crash wrote off the CB360, Crump moved up to a Honda CB750. Since then, he’s owned several motorcycles, including many Harley-Davidson products, from Super Glides to Electra Glides.
After being bit by the road racing bug in 2000, Crump started racing Buell motorcycles on the track. Now, Crump and his Thunderracing.ca team are campaigning the new 2009 Buell XB1125.
And during the summer Crump commutes to work from Bragg Creek to Calgary, and he puts some 20,000 km on his H-D Ultra Classic touring machine. Whether it’s on the road or on the track, motorcycling has long been Crump’s passion. 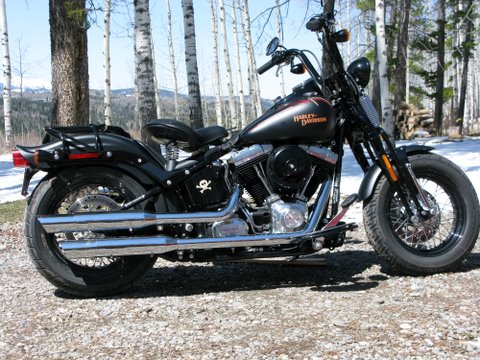 “The Cross Bones is an interesting looking motorcycle,” Crump says of his initial reaction to the ‘bobbed’ styling. “With the spring fork out front and the sprung solo seat, it looks like an old-school bike. From an uneducated point of view, you probably couldn’t tell if it was old or new.”
Adding to that old-style look, says Crump, is the flat black paint — a colour H-D refers to as Black Denim — and the pin striping on the gas tanks and rear fender.
Crump is not usually a fan of tall handlebars but in the case of the tillers on the Cross Bones he says they suited his 6’2″ stature.
“The bars made the riding position quite comfortable,” he says. “Its quite an upright riding position, but it felt like I was sitting on an office chair. My feet were on the floorboards and my knees were bent at 90 degrees — for me it was the perfect riding position.”
Those floorboards, together with the sprung solo saddle, are a throwback to the past. The floorboards on the Cross Bones are shaped in a half-moon configuration — a style of board Harley-Davidson was famous for on its older machines.
But the floorboards, in Crump’s opinion, were mounted either too low or too far away, as he was scraping them on corners, even in the city.
“I wasn’t riding aggressively, but even on some cloverleafs or heeled over in an intersection they’d touch down,” he says. “My (Ultra Classic) doesn’t drag like the Cross Bones did.”
However, the saddle found favour with Crump. He says it helped make for a comfortable and smooth ride.
Crump put 158 kilometres on the Cross Bones, and he started his test ride from Calgary Harley-Davidson in the northeast. He put it through its paces on the city streets, and then rode out towards Bragg Creek, and back into town along Highway 22X.
In the city is where the bike shone, he says. The 1,584cc Twin Cam engine provided good power, and Crump felt that the six-speed gearbox was the smoothest shifting item he’d ever experienced in a Harley product.
On the highway, Crump felt a full blast of wind hitting his chest, and says he probably would have been more comfortable had the bike been fitted with a windshield. Either that, he joked, or he is too old to look cool without a windshield.
He found the Cross Bones was ‘flickable’, which surprised him. Crump thought that with two big cross-section tires (front is a MT90B16, rear is a 200/55R17) the handling might be compromised, but he didn’t find that to be the case. He intentionally searched out cracks and seams in the roadway, and could not induce any wallowing or wandering. The brakes also contributed to his sense of safety.
“As a racer, I’m used to using a lot of front brake,” Crump says. “And it was quite amazing for that bike how good it worked — it was really quick to bring the speed down.”
The front brake is a single-piston caliper clamping a single rotor, and the rear brake features a two-piston caliper.
As fuel prices edge up once again, Crump thought it prudent to mention that his Cross Bones returned 4.57 L/100 km.
“That’s really great fuel economy with average riding around town and on the highway,” he says.
His final opinion of the $22,499 Cross Bones (before taxes and dealer set up fees)? Crump says, “Throw over a set of saddlebags and put on a windshield, and the bike would be a great all-rounder.” 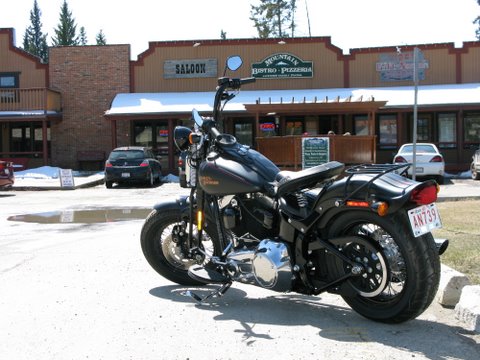