In that year Ariel offered eight models – all of them four stroke motorcycles, and not one of them less than 250cc. 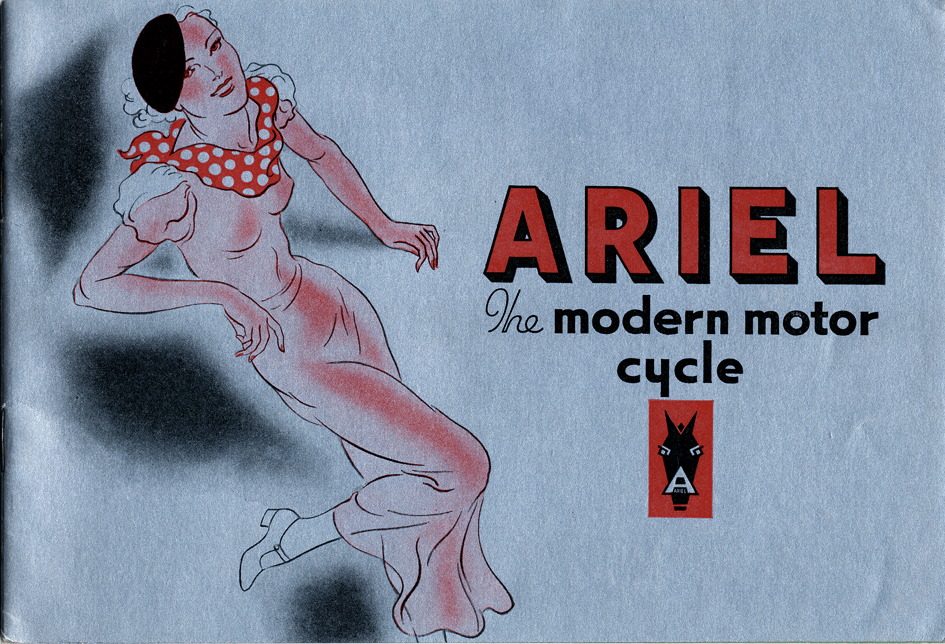 By 1936 Ariel had been producing motorcycles for 35 years, although the history of the company goes back further than 1901. It starts off in 1869 with James Starley, a talented engineer who was employed as a foreman with the Coventry Sewing Machine Company of Birmingham, England. According to the Ariel Motorcycle Club of North America, Starley thought there was a brighter future in wheeled transportation, namely high-wheel bicycles and their components. The company was re-branded – to use modern-day parlance – the Coventry Machinists Company.

In 1870 Starley found a partner in William Hillman and together they built the first Ariel high-wheeler. Ariel was a name borrowed from the pages of Shakespeare’s play The Tempest. In the 1610 play Ariel is a spirit who is at the service of Prospero, and becomes his master’s information gatherer. Ariel is invisible to all but Prospero, and is also able to fly. It’s Ariel’s ability to fly that gave the name credence when applied to a bicycle.

Ariel – along with many other manufactures, both American and British – soon latched onto the idea of the safety bicycle. These were so-called because both front and rear wheels were roughly the same size as opposed to the high wheeler bikes of the day. It’s hard to determine just who exactly can claim the invention of the chain rear drive, but some say it was Starley’s nephew, John Kemp Starley. His Rover safety bicycle was released in 1885, although he came up with the notion for a chain drive several years before.

Charles Sangster joined the Ariel company in 1897 as managing director of cycle components, and it wasn’t long before a gasoline engine was placed in a frame. However, for Ariel, their first motorized products were tricycles and quadricycles. These machines proved their reliability and speed during trials in England, and Ariel continued with their development. Their first motorcycle, fitted with a 2.5 horsepower Minerva engine, appeared in 1901 but the machine wasn’t available for purchase until 1902.

And it was in 1902 that Sangster took control of Ariel. He moved the company from strength to strength, and introduced several remarkable models of the day, many of them powered by Kerry, Minerva or White & Poppe engines. Sangster’s son, Jack, took control of Ariel in 1918 and he broadened the firm’s position in the motorcycle industry as he developed larger, increasingly more powerful machines with help from designer Val Page.

In 1928 young Edward Turner, a manager of a motorcycle shop in Peckham, England, conceived the idea for a square four motorcycle engine. He drew up plans and shopped them around the industry, but it was only Sangster at Ariel who was interested. Sangster hired Turner, and the Ariel Square Four was released in 1931.

When drawing his four-cylinder engine Turner was aware of large and heavy inline four engines such as those produced by American maker Henderson, but he envisioned something much more compact. His design featured geared flywheels on two separate crankshafts. Each crankshaft supported two pistons, and the two pairs made up the ‘square’ four design. The pistons were arranged in a single block, topped with a chain-driven overhead cam. At first a 498cc engine, the capacity was increased in 1932 to 601cc. The model continued little changed for the next four years, right up to the time or our 1936 Ariel brochure.

“For 1936 we offer from Ariel’s Modern Factory a range of machines unequalled for appearance, performance and design,” stated the foreword to the 1936 brochure. “No drastic alterations have been found necessary although many important improvements have been incorporated, and all models are now equipped with every feature demanded by the practical Motor Cyclist.”

Red Hunter, one of Ariel’s most popular models. Love the upswept exhaust on these singles.

All motorcycles featured a cradle-type tube frame. Steel girder forks were used across the range, as was a rubber-insulated tank-top instrument panel. Ignition and lighting was via Lucas 6-volt Magdyno equipment, and featured a large 8” headlamp. Every motorcycle in 1936 was finished in black enamel over a chrome base on the fuel tank with the exception of the Red Hunters; these were finished in red. 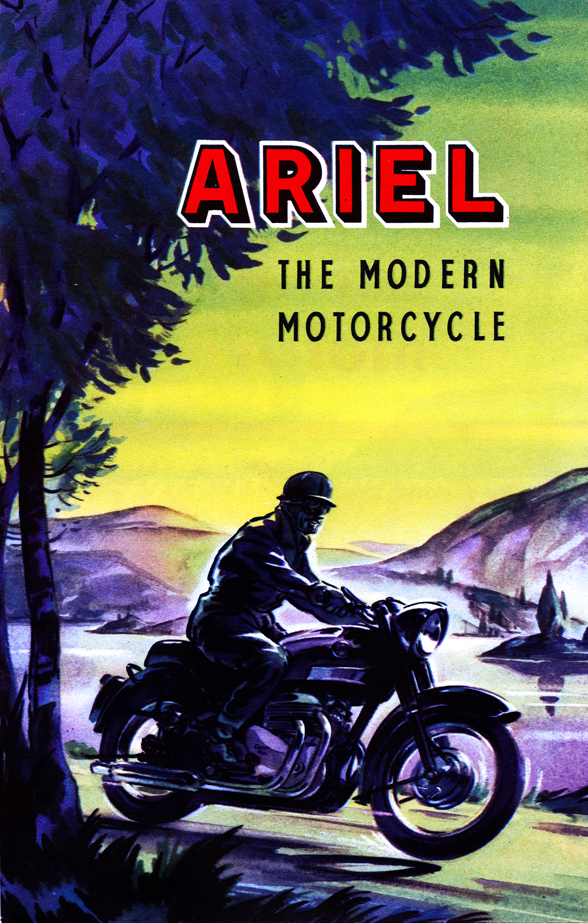 Ariel brochure cover for 1959, not quite as sexy as the one for 1936, but still a romantic piece of art.

In 1959 the Ariel range included the Square Four, 650cc Huntmaster twin, Red Hunters in 350cc and 500cc single-cylinder sizes, and the 200cc Colt. That same year Ariel unveiled the unique Leader model, powered by a twin-cylinder two-stroke engine suspended in a frame of pressed steel. In 1960, there were no four-stroke Ariel motorcycles, only the Leader and the new Arrow. The engine in the Leader was enclosed in pressed steel coverings, while the Arrow, with more of a sporting pretension, had its engine out in the open. 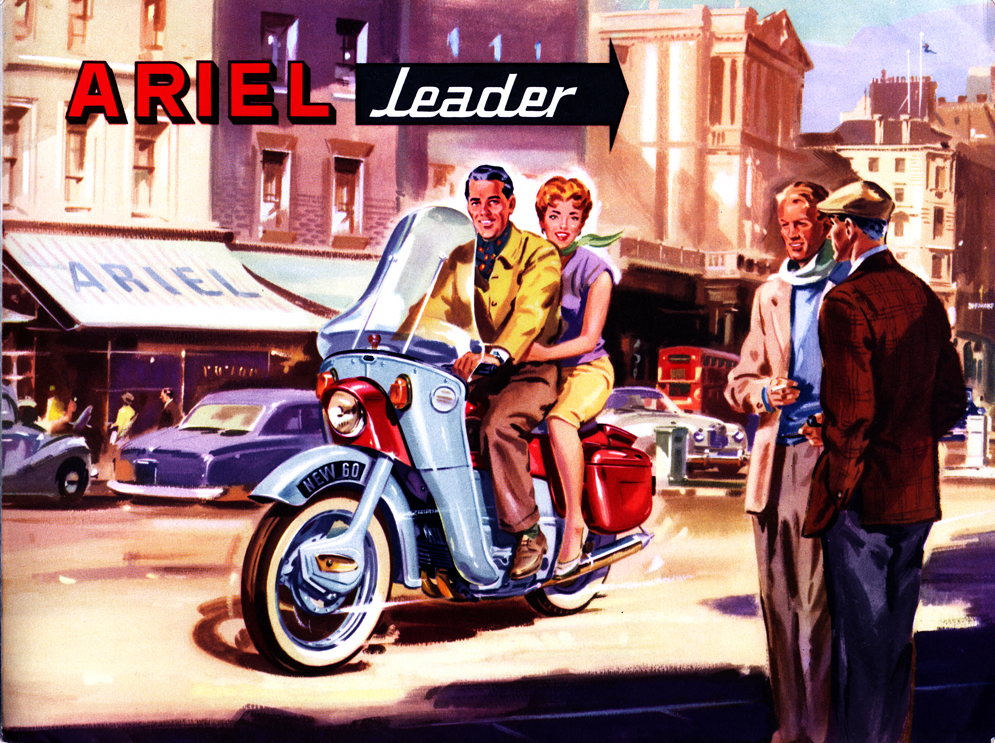 One of Ariel’s products for 1960, the Leader. To think the company that produced the lovely rigid-frame, high pipe Red Hunter with girder forks to this last machine — the Pixie. What progress? 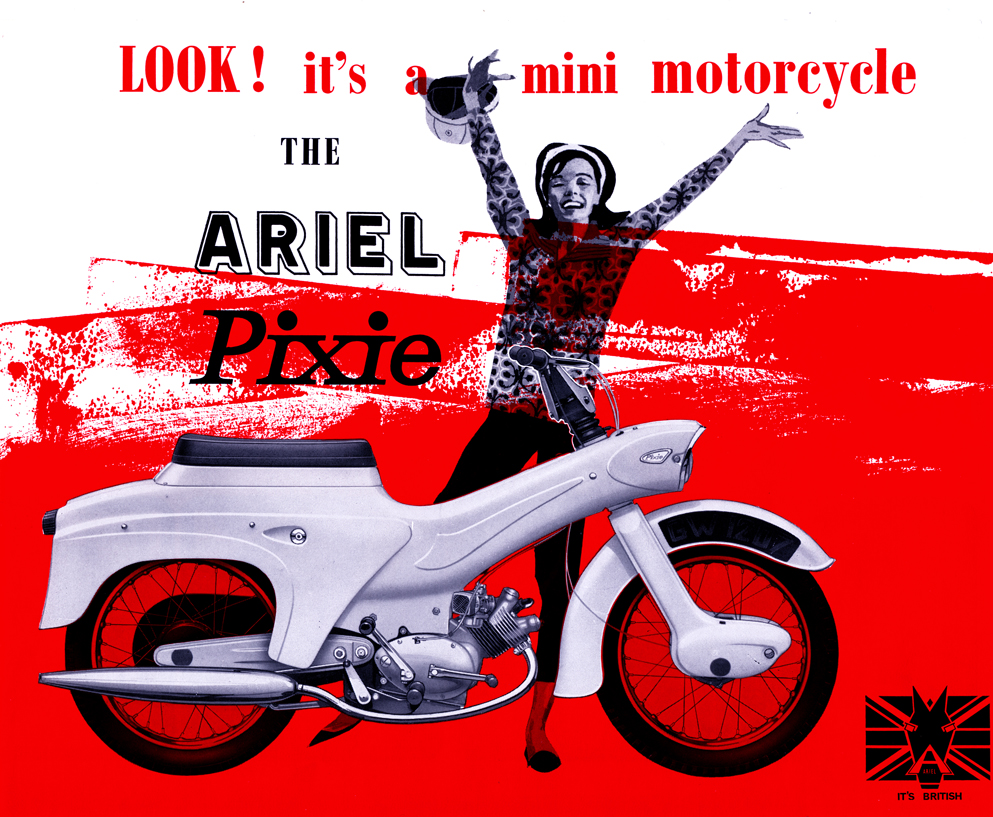 Ariel built their last two-wheeled motorcycle in 1967, and the very last machine produced by this storied British company in 1970 was a 49cc trike, which turned out to be a commercial failure and the final nail in the coffin, as it were. However, the name Ariel does live on in the form of the Ariel Atom, a hot little bespoke sports car built by the Ariel Motor Company (U.K.). In 2001 this British engineering firm acquired the rights to the Ariel name.