This story first published in Inside Motorcycles, Issue 1206

All photographs by Amee Reehal 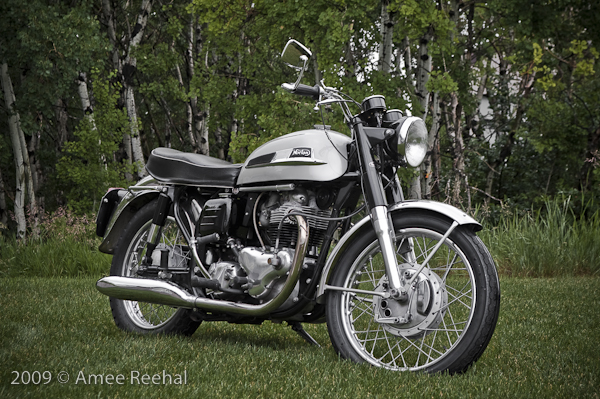 The slogans ‘The Unapproachable Norton’ and ‘The World’s Best Road Holder’ defined one of the most fabled British motorcycle builders. Founded in 1898 by James Lansdowne Norton, or Pa, as he was commonly known, Norton brought to the motorcycling masses several technological advancements. Not the least of these developments was the featherbed frame as designed by the McCandless brothers.

Since the early 1940s the brothers had been working on advanced frame designs, labouring at improving the handling of their own motorcycle – a Triumph. But the McCandless brothers came to the attention of Norton and they were persuaded to design a frame for the Birmingham, England motorcycle company. The featherbed was the result – an all welded duplex tube frame with swingarm rear suspension. The design of the frame was such that the centre of gravity was lowered, and the fuel tank placed further back from the steering head to help centralize weight

Their featherbed motorcycle chassis, introduced to Norton in 1949 and used in the 1950 Isle of Man TT races, revolutionized how Norton motorcycles handled. There are a couple of stories about how the name featherbed was coined. The most popular is that in 1950, when Norton racer Harold Daniell first rode a 500cc single-cylinder equipped McCandless frame he was so impressed with the handling that he equated it to “riding on a featherbed.” The name stuck.

In 1951 Norton’s Model 7 500cc twin-cylinder engine slid into the featherbed frame, and that was the Model 88 Dominator. Over the years Norton used the featherbed frame for many of its motorcycles, including its more pedestrian 350cc and 500cc single-cylinder machines. It was the twin-cylinder Dominator Model 99 that grew to 600cc in 1956, and in 1960 the machine’s top frame rails were pinched together (this made the Slimline frame), thus decreasing the width to better accommodate a rider’s knees. In 1961 the first 650cc Norton was an export only Manxman, and in in 1962, the company introduced the  650SS with the Slimline frame.

Then came Norton’s 750cc Atlas. Introduced in 1962, the Atlas was initially intended to be something of a sport-touring machine, often sold with a single Amal carb. (The 1961 Manxman and 650ss were twin carb bikes with 9:1 compression were much more comparable to the Triumph Bonneville. The Model 99 did have the option of twin carbs, high compression and polished ports as far back as 1958.) In 1964 the Atlas was fitted with 12-volt electrics and a second AMAL carburetor. The Atlas was produced until 1968, when the Isolastic-framed Commando was introduced.

Calgary motorcycle enthusiast Bob Klassen has been nuts for bikes ever since his first – a 175cc Harley-Davidson Scat. He got into old British motorcycles in 1985 when he bought a 1970 Triumph Bonneville, literally as an offshoot to his English car hobby. He does, however, have some Italian and American motorcycles in his collection of eight machines. Klassen discovered this featured 1968 Norton Atlas on eBay in 2005, and encouraged a friend to purchase the motorcycle.

“He’d had a British bike in his younger days, and I was always trying to convince him to get back onto a British machine,” Klassen said. “This Norton was in the northwest U.S., and it appeared to be in stock condition. I got my friend interested and he bought the bike.” 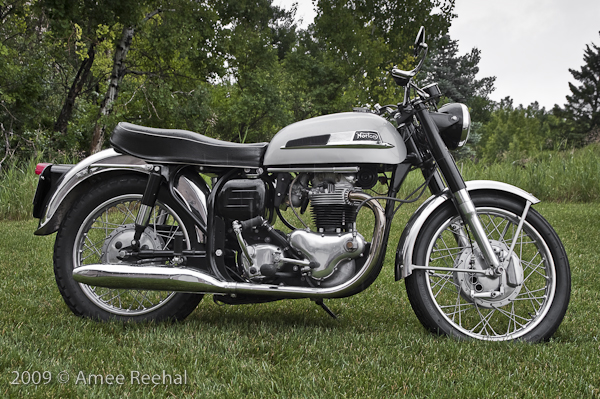 After he got the bike home to Calgary, though, his interest waned, and he had trouble getting the Norton started. It languished for three years until the spring of 2008, and that’s when Klassen got a phone call. “He said ‘Come pick up the bike, and do what you need to do to get it running’,” Klassen recalled. After Klassen picked up the Norton it took him a day or two to sort through some wiring and the points ignition system – difficult to access thanks to their location behind the cylinders and underneath the carburetors — before ho got it fired up. But after it started, the Atlas seemed to run and idle fine, so he strapped on his helmet, zipped up his jacket and pulled on his gloves and went for a ride. “I had the thing seize up 20 miles later,” Klassen said. “I got the truck and brought the bike back home and took the motor apart. That’s where this very pretty and stock looking Atlas came off the rails.”

Inside the motor there was a bent connecting rod, and it appeared the cause was from a seriously ham-fisted rebuild job. “The rods were installed backwards,” Klassen explained, and this shortened the life of the rod shell bearings and the rods. His friend didn’t want to get this far involved with the Atlas, and at this point offered to sell it to Klassen – and Klassen couldn’t refuse. 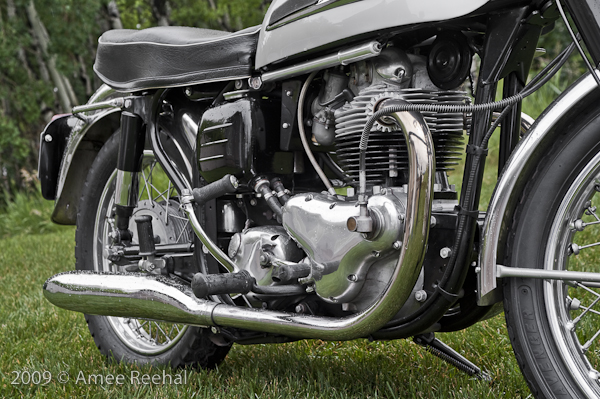 “Finding the engine in such poor condition was a shock, and it was such a shock because it was in total contrast to what the rest of the bike looked like. Everything was there – even the enameled brass Norton insignias and Road Holder fork badges. I suspect the tank has been repainted, but the frame and everything else, including the fasteners, are original.”

(Note: Reader Benjamin Gradler added this comment: The Atlas in the photos is not 100 per cent original. It has a Commando front fender and two-leading-shoe front brake plate, it has a much older rear tail light as used in the early ’60s, and after 1963 Norton did not use the riveted on Roadholder badges on the forks anymore, they switched to a decal, so someone added those to this later bike too.)

Over the course of two months Klassen completely rebuilt the Atlas motor. In the bottom end he had the crank reground, installed new main bearings, rods and big end shells. After the cylinder was bored .020 over new pistons were installed. The cylinder head was completely refurbished with new guides, valves and springs. The twin 30mm AMAL Concentric carburetors are showing some signs of slide wear but were cleaned and bolted to the intake manifold. With the motor back in the frame it took Klassen little time to tune the carbs and get the Norton running. After that, all that was required for the Norton to pass inspection was a new rear tire. With the Atlas back on the road and more than 850 miles on the rebuild Klassen has nothing but praise for the machine.

“I’ve never owned a Norton and I’d never ridden a Norton until this Atlas,” Klassen said. “The Atlas is a heavier feeling bike, and it’s not as quick feeling as my Bonneville. It’s got a firm, pointed where you want to go feel to it. The engine, being a 750cc, has a very pliant torque characteristic. I love it.” 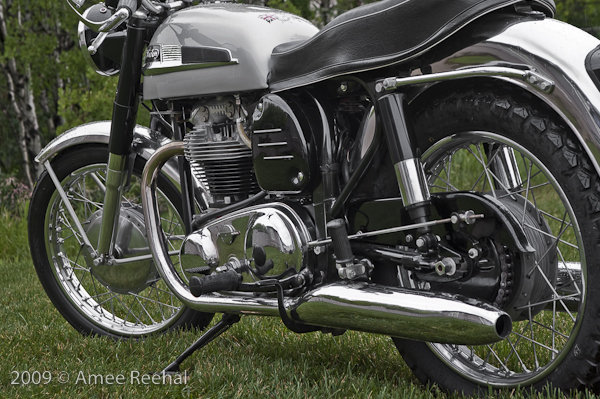 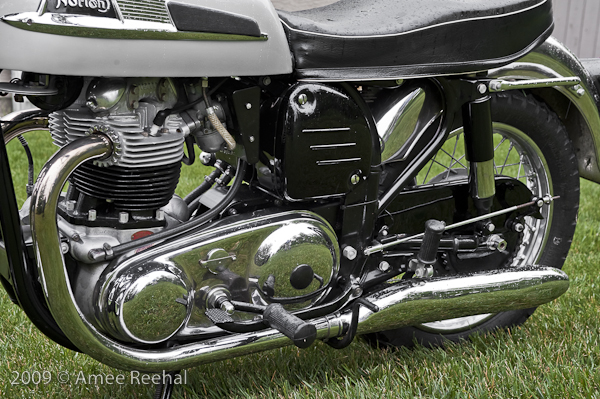 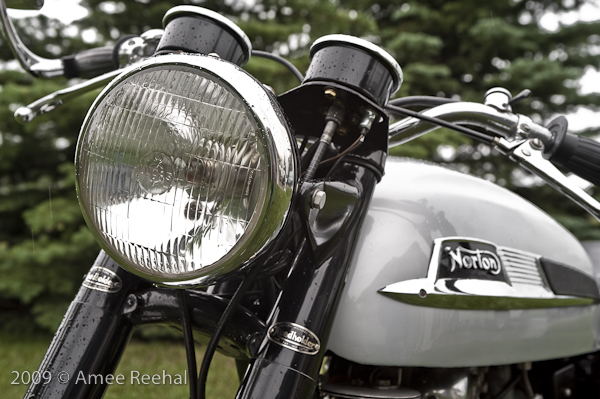