Motorcyclist and author Jeremy Kroeker’s book Motorcycle Therapy is worth a read.

This story about Kroeker ran in the April 2009 issue of Inside Motorcycles — run to your nearest motorcycle shop, or Chapters/Indigo to find the latest edtion. Western Perspectives is my monthly column in this Canadian motorcycle magazine. 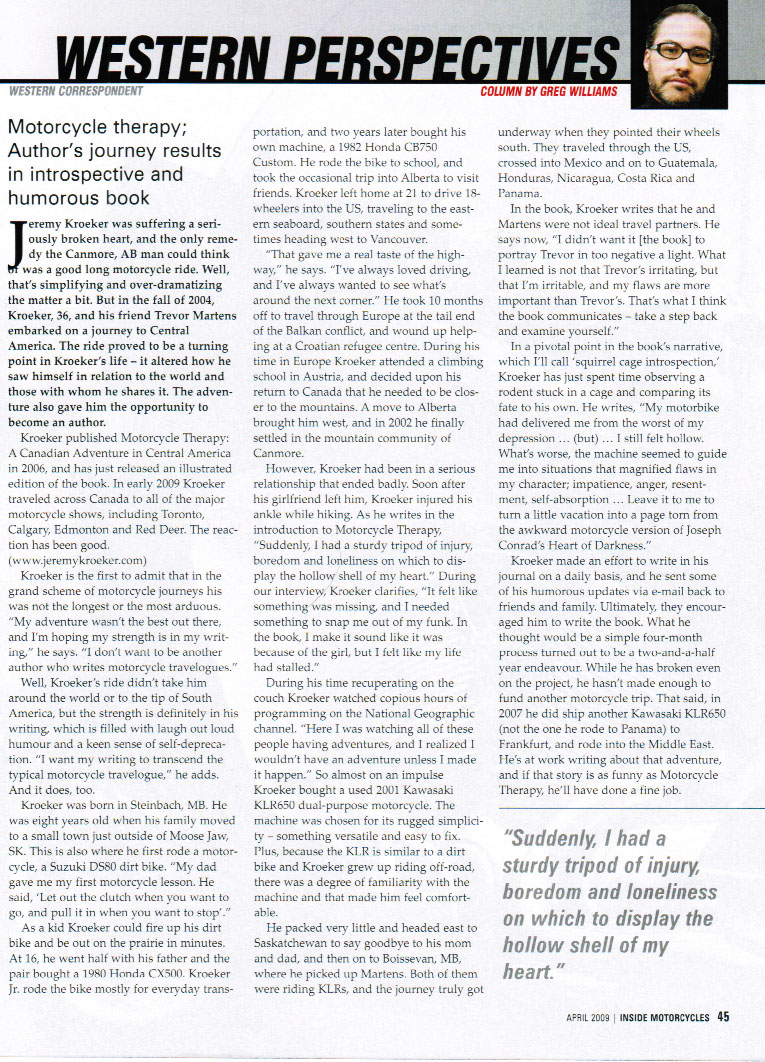 Jeremy Kroeker was suffering a seriously broken heart, and the only remedy the Canmore, Alberta man could think of was a good long motorcycle ride. Well, that’s simplifying and over-dramatizing the matter a bit. But in the fall of 2004, Kroeker, 36, and his friend Trevor Martens embarked on a journey to Central America. The ride proved to be a turning point in Kroeker’s life — it altered how he saw himself in relation to the world and those with whom he shares it. The adventure also gave him the opportunity to become an author.

He published Motorcycle Therapy: A Canadian Adventure in Central America in 2006, and Kroeker just released an illustrated edition of the book. In early 2009 Kroeker traveled across Canada to all of the major motorcycle shows, including Toronto, Calgary, Edmonton and Red Deer. Reaction has been good. (www.jeremykroeker.com.)

Kroeker’s the first to admit that in the grand scheme of motorcycle journeys his wasn’t the farthest or the most arduous. “My adventure wasn’t the best out there, and I’m hoping my strength is in my writing,” he says. “I don’t want to be another author who writes motorcycle travelogues.” Well, Kroeker’s ride didn’t take him around the world or to the tip of South America, but the strength is definitely in his writing, which is filled with laugh out loud humour and a keen sense of self-deprecation. “I want my writing to transcend the typical motorcycle travelogue,” he adds. And it does, too.

Kroeker was born in Steinbach, Manitoba. He was eight years old when the family moved to a small town just outside of Moose Jaw, Saskatchewan. This is also where he first rode a motorcycle, a Suzuki DS80 dirt bike. “My dad gave me my first motorcycle lesson. He said, ‘Let out the clutch when you want to go, and pull it in when you want to stop’. As a kid he could fire up his dirt bike and be out on the prairie in minutes. At 16, Kroeker went half with his father and the pair bought a 1980 Honda CX500. Kroeker Jr. rode the bike mostly for everyday transportation, and two years later bought his own machine, a 1982 Honda CB750 Custom. He rode the bike to school, and took the occasional trip into Alberta to visit friends. Kroeker left home at 21 to drive 18-wheelers into the U.S., traveling to the eastern seaboard, southern states, and sometimes heading west to Vancouver.

“That gave me a real taste of the highway,” he says. “I’ve always loved driving, and I’ve always wanted to see what’s around the next corner.” He took 10 months off to travel through Europe at the tail end of the Balkan conflict, and wound up helping at a Croatian refugee centre. During his time in Europe Kroeker attended a climbing school in Austria, and decided upon his return to Canada that he needed to be closer to the mountains. A move to Alberta brought him west, and in 2002 he finally settled in the mountain community of Canmore.

However, Kroeker had been in a serious relationship that ended badly. Soon after his girlfriend left him, Kroeker injured his ankle while hiking. As he writes in the introduction to Motorcycle Therapy; “Suddenly, I had a sturdy tripod of injury, boredom and loneliness on which to display the hollow shell of my heart.” During our interview, Kroeker clarifies, “It felt like something was missing, and I needed something to snap me out of my funk. In the book, I make it sound like it was because of the girl, but I felt like my life had stalled.”

During his time recuperating on the couch Kroeker watched copious hours of programming on the National Geographic channel. “Here I was watching all of these people having adventures, and I realized I wouldn’t have an adventure unless I made it happen.” So almost on an impulse Kroeker bought a used 2001 Kawasaki KLR650 dual-purpose motorcycle. The machine was chosen for its rugged simplicity — something versatile and easy to fix. Plus, because the KLR is similar to a dirt bike and Kroeker grew up riding off road, there was a degree of familiarity with the machine and that made him feel comfortable. He packed very little and headed east to Saskatchewan to say goodbye to his mom and dad, and then on to Boissevan, Manitoba, where he picked up Martens. Both of them were riding Kawasaki KLRs, and the journey truly got underway when they pointed their wheels south. They traveled through the U.S., crossed into Mexico and on to Guetamala, Honduras, Nicaragua, Costa Rica and Panama.

In the book, Kroeker writes that he and Martens were not ideal travel partners. He says now, “I didn’t want it (the book) to portray Trevor in too negative a light. What I learned is not that Trevor’s irritating, but that I’m irritable, and my flaws are more important than Trevor’s. That’s what I think the book communicates — take a step back and examine yourself.”

In a pivotal point in the book’s narrative, which I’ll call ‘squirrel cage introspection’, Kroeker’s just spent time observing a rodent stuck in a cage and comparing its fate to his own. He writes: “My motorbike had delivered me from the worst of my depression (but) I still felt hollow. What’s worse, the machine seemed to guide me into situations that magnified flaws in my character; impatience, anger, resentment, self-absorption. Leave it to me to turn a little vacation into a page torn from the awkward motorcycle version of Joseph Conrad’s Heart of Darkness.”

Kroeker made an effort to write in his journal on a daily basis, and he sent some of his humorous updates via email back to friends and family. Ultimately, they encouraged him to write the book. What he thought would be a simple four-month process turned out to be a two and a half year endeavour. While he’s broken even on the project, he hasn’t made enough to fund another motorcycle trip. That said, in 2007 he did ship another Kawasaki KLR650 (not the one he rode to Panama) to Frankfurt, and rode into the Middle East. He’s at work writing about that adventure, and if that story is as funny as Motorcycle Therapy, he’ll have done a fine job. 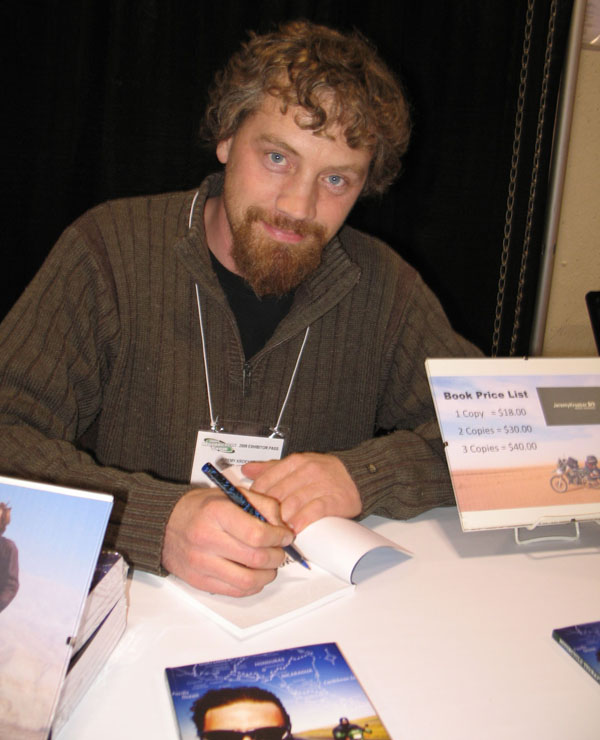 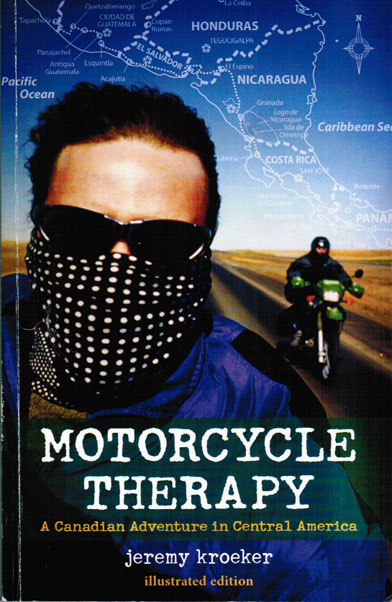