I am surprised by the response regarding the first story (in the Calgary Herald) about Jim Wylie and Joe Haseloh’s adventures on the Salt Flats. There have been hundreds of hits — with most interest coming from European countries where the CX model is quite revered.

What follows is an expanded story, this one published in Canada’s Inside Motorcycles magazine (March, 2008) . My column, Western Perspectives, runs monthly in that magazine. 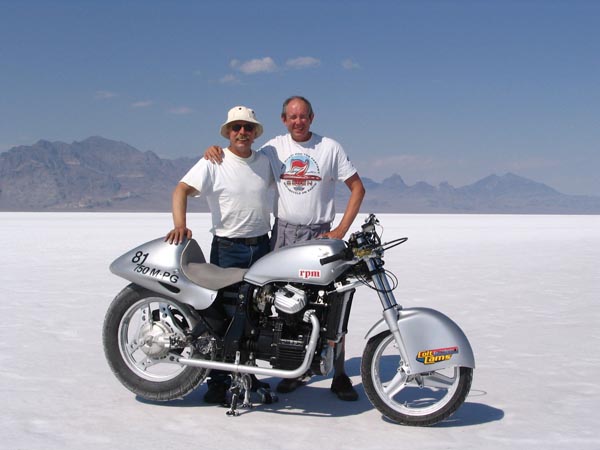 But as Wylie, 52, notes, “The years just go by. If I have any advice after this experience it’s to go ahead and do whatever it is you want to do — because it doesn’t get any easier.”

Both men dabbled in racing in the mid to late 1970s, and Wylie says; “Joe was a good racer, whereas I was average. I was a mid-pack rider, while Joe was the Western Canadian Superbike champion in 1978.”

Well acquainted with speed, Wylie and Haseloh felt the call of the Salt Flats. It was 2006, however, before the pair finally boarded a plane and flew to Utah, rented a car, and drove out to witness the BUB Motorcycle Speed Trials. “We wanted to see what it was all about,” Wylie says. “We spent a week down there in 2006, and the locals said it was the best salt conditions in living memory. That gave us a bit of a false impression.”

While circulating among the pits Wylie and Haseloh chanced upon Tom Liberatore, an Italian motorcycle aficionado racing a ca.1974 Moto Guzzi 750 V7 Sport in a 750cc pushrod class. “We talked for hours and hours. He held two records in the 750-pushrod class, and he confessed the only thing he feared was a Honda CX650,” Wylie says. The Honda CX650 is a rather unique motorcycle. While the bike was supposedly never sold in the U.S., it was available in Canada in the early 1980s. The engine featured pushrod-actuated valves, and was in a ‘flying V’ configuration, similar to the Moto Guzzi. But that’s where the similarities end. Honda’s CX650 features modern niceties such as four valves per head, liquid cooling, a 10,000 r.p.m. rev limit and shaft final drive; that’s why Liberatore was scared.

“It seemed like it would be so easy to annihilate a two valve, air cooled engine,” Wylie says, speaking of Liberatore’s Moto Guzzi record holder in the pushrod class at Bonneville. “The 750 pushrod records (were) low hanging fruit,” Haseloh commented to Wylie upon their return to Calgary in 2006. So the pair hunted down and purchased two 1983 Honda CX650s, one from a classified ad and the other from a friend of Haseloh’s brother. Turns out the machine purchased from the ad was ‘a totally miled out piece of junk’, while the other was an exceptionally well maintained bike in near immaculate condition. Another bike, a GL650 (same engine as the CX, just in a cruiser configuration) was donated by TJ’s Cycle in Calgary. A spare motor was purchased on eBay — and that gave the team four 650cc engines and three bikes.

Of course, both Wylie and Haseloh wanted to ride, so they set out to prepare two CX650s, one for each. Wylie would contend the 750 Production Pushrod class (750 P-PP — with a record 117.5 mph), while Haseloh would ride in the 750 Modified Partially Streamlined Pushrod Gas class (750 MPS-PG — 130 mph record). “We were going to be Liberatore’s worst dream come true,” Wylie says. 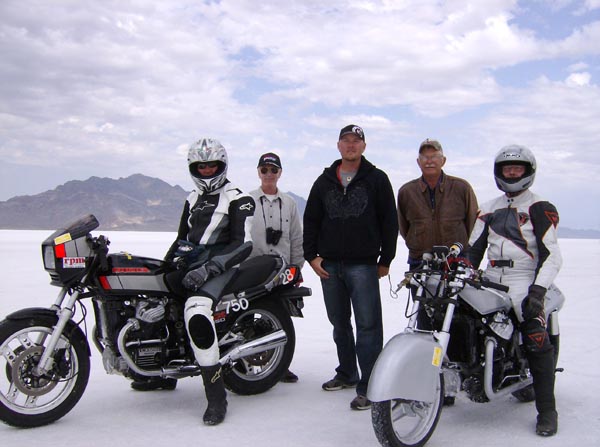 Work didn’t really start on the projects until July of 2007. Wylie’s Production bike was fairly easy to make race ready — they removed the mirrors and signal lights, changed the handlebars to a low profile bend, and tuned the engine. The hard part was changing the gearing so that the bike would reach its top speed while the engine was still in the fattest part of its power curve. Easier said than done on a shaft drive motorcycle. In the end, it came down to putting the largest tire at the back end as possible — a 130/90-18″ Cheng Shin shoe. According to Wylie, at speeds greater than 150 km/h (all changes and modifications were tested on Haseloh’s dyno) the Chinese three-ply tire expanded by one inch. This ‘growth’ figured into their gearing calculations.

The Modified bike took a bit more effort. All new body panels were sourced and made to fit, a high-speed front fender was slotted into a set of Suzuki front forks, and a side mounted Gold Wing air shock was installed. The latter modification was in an attempt to fit a taller rear tire to further change the gearing. In the engine department Haseloh massaged the valves, installed a set of 42 mm Malossi racing carbs with custom intake manifolds and hand fabricated a set of exhaust pipes from scrap tubing. The bike should have been a winner.

Using a borrowed truck the pair got to Bonneville and the BUB speed trials for Sept. 2 to 6, 2007. Right away, they noticed the salt was completely different than it was in 2006. It was much wetter, making it rutted and filled with potholes. A couple of oversights left them working on the bikes just to pass tech inspection, and the Modified bike couldn’t be passed until metal tire valve stems were procured from Salt Lake City. That left the Production bike to run, and Wylie managed, with a slight tail wind, to achieve 120.3 mph through the measured mile. His return run an hour later was into a head wind and was slower at 117.432, but the average was 118.754 — enough for the record.

A competitor racing a Triumph Triple in the 750 MPS-PG class blew the team out of the water with a 157 mph pass, totally demoralizing them before they even had a chance to run the partially streamlined CX. They removed the fairing from their bike and entered the 750 Modified Pushrod Gas class instead, and after finally passing the tech inspection were allowed to run on a short, three-mile course. This run made evident a coolant leak, and the Production machine was cannibalized for spares. On the last day, and after waiting in line for hours the team never got to run.

“In the end BUB let us and some others do one way timed runs which was very kind,” Wylie says. “It was on this single run on the long course that we discovered our final and last mechanical problem. The fuel petcock we had installed at the last minute because of clearance issues did not flow enough fuel and Joe had to go through the mile at three-quarter throttle. Still he ran 121.234 mph, and we are convinced that with full power we could have taken the 130 mph record.”

Wylie and Haseloh intend to recuperate in 2008, and head back down in 2009. Wylie chuckles, “I don’t think I’ve recovered yet; either mentally or physically.” 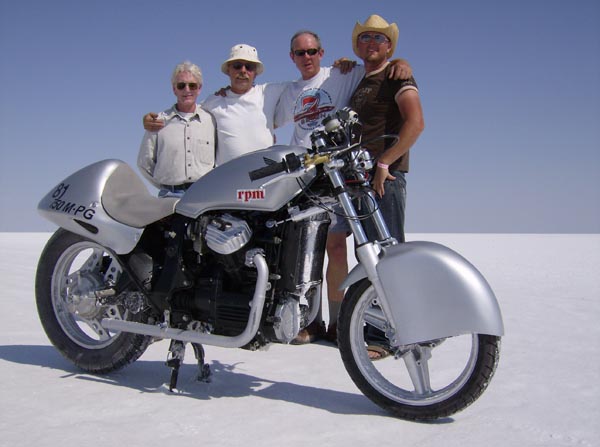