Please click on the thumbnail to see larger image. 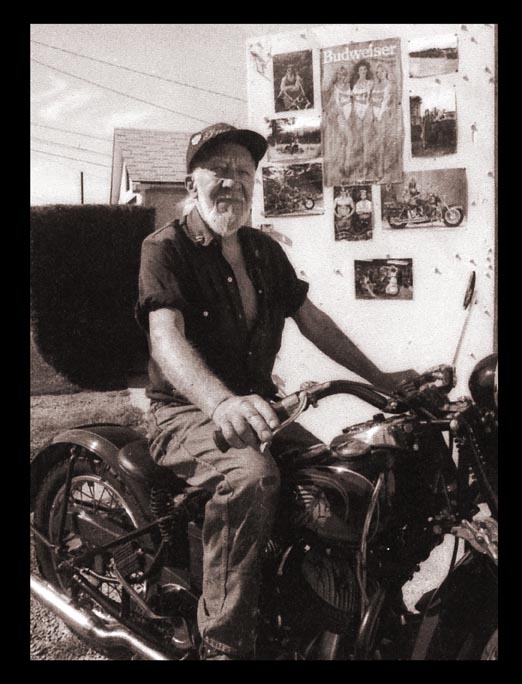 Photo courtesy the Murphy family: Spud Murphy aboard his Indian.

And, if it’s hard to read the text, here’s the story.

When father and son Terry and Chad Murphy want to remember dad and grampa, they don’t have to look at a worn black and white photo; they can go to the garage and bring to life the Indian motorcycle he took on a summer journey in 1940.

The late Charles Gordon Murphy — better known as Spud — was born in 1918 in Neville, Saskatchewan but spent most of his life in Calgary. His first motorcycle was a 1932 New Imperial, a machine he bought for $5 in 1935. By 1940 he was pumping gas and fixing cars at the Big Chief Texaco station on 17 Ave. in Calgary, and he’d earned enough money to buy a Model 640 Indian Sport Scout. Most likely the bike was used, as it came from the local Harley-Davidson dealer Clyde Paul.

Murphy and his friend Les ‘Mac’ McNulty had decided they would ride their motorcycles to Tijuana, Mexico in the summer of 1940 before they enlisted. He had $8 in his pocket, while McNulty had $9. On the way they stopped in Latah, Washington where Spud’s uncle was a farmer, as well as the local moonshiner. The pair earned a little extra money running ‘shine to all of the farmers around the area before moving on to the Washington coast and the town of Eureka. And here, they worked at a friend’s gas station prior to rolling down Highway 101 to Tijuana.

“He told me all kinds of stories about his trip,” Terry says. “I can’t remember all of them, but he did tell me he also worked at a carnival in Laguna Beach, California where he rode the Wall of Death.
“I can see him doing that — he didn’t have any fear.”

When Murphy returned from Mexico he traded the Indian Scout for a brand new big twin Harley-Davidson. He stored the Harley in the barn on the family farm and then enlisted for service. He was shipped overseas where he was put in charge of a mobile motorcycle unit, and didn’t return until 1945.

Fast-forward 45 years to 1990. Spud and Terry are out for a ride, visiting a friend in Central Alberta who is a machinist/welder with a penchant for picking up all kinds of projects from cars to motorcycles. In his Quonset hut sat an Indian motorcycle, which had been restored to a point where it was a running machine — with a few details left unattended. Spud was offered a ride on the Indian, and he took the opportunity.

“Afterwards, dad’s sitting there looking at this thing, and I said, ‘Why don’t you buy it?'” Terry recalls. Spud asked how much it would take to purchase, and the reply was $10,000. “Dad said OK, and reached over and shook hands on the deal.
“I pretty near fell over,” Terry adds. “Dad was from the old school of not spending a lot of money.”

When they got the bike home Spud took a close look at the serial number. He got to thinking, and went inside to dig out an old logbook where he’d documented oil and lube jobs on his 1940 Indian, and he’d also noted the serial number. Turns out the serial numbers matched, and without any inkling of the connection, Spud had just purchased the Indian he’d ridden to Mexico some 50 years earlier.

Indian’s Scout dates back to 1920, when the company introduced the model with a 596cc (37ci) 42-degree V-twin engine. Engine capacity increased in 1927 to 745cc (45ci), and the model was further improved with the introduction of the 101 Scout in 1928. The 101 Scout had a lengthened wheelbase and a lower saddle height than its predecessor. The 101 possess legendary handling traits, and it was popular with sporting motorcyclists — including Wall of Death riders.

By 1932 Indian was facing cost-cutting measures and the company consolidated its models — the Chief was another popular motorcycle made by Indian — and they placed a Scout engine into the heavier Chief frame. To say the machine gained a little heft would be an understatement; nearly 60 pounds were added to the Scout. Of course, enthusiasts decried the weight gain, forcing Indian to introduce the Sport Scout in 1934. Sport Scouts were an amalgamation of parts and pieces from a few other Indian machines, including the Prince, 101 Scout and Junior Scout. The new Sport Scouts were lighter and quicker, and in the mid to late 1930s they were achieving success on dirt tracks across North America.

In 1940 Indian introduced the model 640 Sport Scout. Many of the 640s were built for military use, while others were designated for civilian buyers. Differences between the military and civilian bikes were skirted versus open fenders, full kickstart guard on the civilian machine, and different wheel hubs. Another subtle difference was the addition of small brackets or tabs on both sides of the lower half of the front girder fork; these would anchor the full-skirted fender found on the civilian bike.

Spud’s Indian Scout doesn’t have the full-skirted fenders, and there are other items that make the machine look more like a military model painted and finished to look flashier — but this is the way he remembered the bike from 1940.

Spud was able to enjoy his reconnection with the Scout for almost nine years — he died in 1999. Before he died he taught his grandson, Chad, how to ride the Indian. “We were out for a ride — dad was on the Indian, I was on my FL and Chad was on my Wide Glide.

“We stopped on a quiet road and Spud says to Chad: ‘It’s time you learned to ride an Indian’. So he goes through the drill of how the bike works, and then he takes off, down into a ditch, along the fence line, up and out and then the same thing on the other side of the road. I thought dad was losing it, but he comes back and says to Chad, ‘Now you do the same thing.’ And he did.
“When dad died, I told Chad the bike was his. I’m just looking after if for a while.”