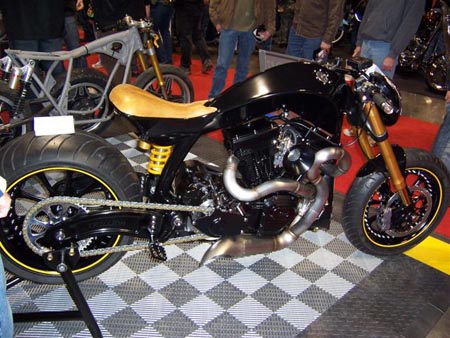 I once knew an extremely talented cabinetmaker, who, when the whine of the table saw was ebbing and the sawdust settling, would wax philosophically, sigh, and say: ?If motorcycles were made of wood, just imagine the bike I could build.?
So when I met Calgary?s Derek Pauletto I was surprised to learn he had been a cabinetmaker early in his life. You see, 34-year old Pauletto actually did trade in his wood saws and rasps for TIG welders and metal cut-off saws about 12 years ago.
Ever since, he?s been determined to engineer his own motorcycle, including engine and frame, by the time he turns 40. He currently builds his own frames, but the engine is taking him some more time. However, Pauletto states: ?I will hammer out one proprietary motorcycle that is all my own — and I?ve got six more years.?
Pauletto is well on his way, as he has just completed his first one-off motorcycle build and he?s gaining some well-deserved attention.
While Pauletto grew up working with wood he says it wasn?t until he was given an opportunity to work with metal that he heard his true calling.
?Right out of high school I was a cabinetmaker ? all my life I?d been into wood, making my own furniture and I thought that was going to be my destiny,? Pauletto says. ?But I?d never had a chance growing up to check into metal, and never had a chance to work with steel or alloy.?
Once given that chance, Pauletto says he saw a new road roll out ahead of him. ?I saw really where I wanted to go.?
While working at a local welding and fabrication shop Pauletto was taught the fine art of TIG welding, and became involved in the repair of motorcycle components.
?I really loved doing the (alloy) repair work, the small and really cool stuff,? he says. ?For me, it?s a pride thing.? 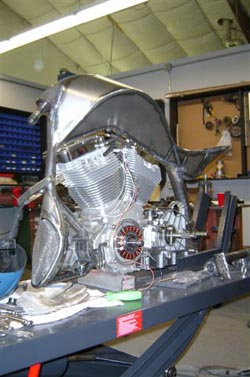 In March 2005 Pauletto left his employer and opened his own business, Trillion Industries. He set up shop in his garage and started taking on work. Soon he was introduced to Calgary oil and gas man Davor Domic, who wanted a macho, super trick machine that would turn heads.
?We had a couple of meetings, and Davor had some pictures of muscle bikes. I drew him some sketches and he said, ?Just run with it?,? Pauletto says. ?His only stipulations were a wide 300 tire and 18 inch rims front and back. And it had to be black.?
To begin the project late in 2005 Pauletto ordered a 124 cubic inch S&S v-twin motor and a right side drive Baker six-speed gearbox. He also picked out a set of RMD billet wheels wrapped in Avon rubber. These components were set on a bench ? motor and gearbox in the middle and wheels at either end — while Pauletto cut out Styrofoam to simulate the frame and its subsequent shape. Pauletto then bent thin-wall 4130-chromoly tubing to form the main backbone, and used the motor as a stressed member. Mounts were installed to suspend the powerplant, and attachments for his own swingarm, which is cushioned by a single Ohlins shock, were welded in place.
The one piece of engineering of which Pauletto is most proud is his one-piece triple-X front fork tree assembly that eschews the conventional two-piece device. He had a friend help him design the tree using computer software, and the piece was cut via electronic discharge machining. Hand-finished, the triple-X proves innovative, yet Pauletto dismisses the idea of patenting the device.
?I don?t know if anyone else has done something like this, it?s hard to say. But just about everything?s been done before when it comes to motorcycles,? Pauletto says.
Pauletto stopped using sketches at some point, and says, ?As I was building it most of the ideas were in my head and I just let it happen.?
He began to really focus on Domic?s bike in June 2006, pushing to have the bike ready for an unveiling at the Calgary Motorcycle Show in early January 2007. Pauletto thought he would have the bike done in a month or maybe two, but he is running a small business and had to pay attention to his other projects. He also moved his shop into a Calgary industrial area building and it took him time to get settled. He and the bike just made the January deadline.
?I put in 250 hours just on the bike in December, and at the same time I was a dad and a husband. It was tough,? Pauletto says. But the work?s paid off. After showing the bike in Calgary he was invited to place the machine in the Parts Canada booth at the Edmonton Motorcycle Show, and then in his own display again in Red Deer.
An Avon tire rep saw the bike in Edmonton and told Pauletto his motorcycle had to be seen at the V-Twin Expo in Cincinatti in early February ? and he made it happen.
?That was great exposure, and it gave me lots of different contacts. It was really life-changing,? Pauletto says.
While the bike he has produced is in itself an artwork, it does remain an operable motorcycle. 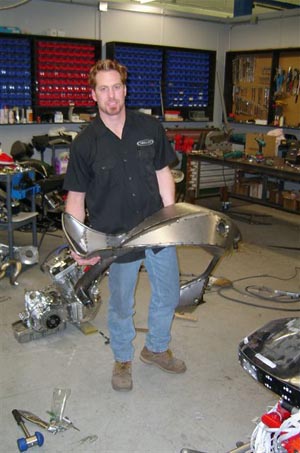 But Pauletto says: ?I?m pretty humble about it. There are a lot of smart people out there building bikes who don?t get enough credit. I?ll just keep working, and as long as I can produce really good work with quality and innovation, I don?t think there?s a limit.?
Pauletto has proven he can build a complete one-off motorcycle, and he?s working towards producing a small-displacement parallel twin engine that uses a supercharger or turbocharger to help boost power. He talks about machining his own bottom end and using components from other brands to complete the top end.
But in the meantime he wants to focus on producing and marketing his own line of components, including brake calipers and master cylinders — all pieces that Pauletto could put to use on his personal motorcycle.
And you can be certain that machine won?t be made of wood.