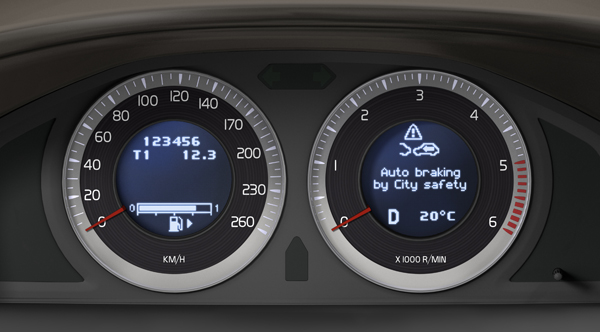 It?s an era of intelligent automobiles ? some so smart they can see.
Automakers are increasingly using laser, radar and camera sensors to assist with vehicle safety. While seat belts, air bags and crumple zones are effective safety devices in the event of a collision, manufacturers would like to avoid a critical situation in the first place.

And Volvo just might be leading the revolution with City Safety, a technology that should help decrease the number of low-speed collisions in stop and go traffic.

When the new Volvo XC60 crossover hits the streets in early 2009 the vehicle will come equipped with the innovative City Safety technology as a standard feature.

?The future is already here,? says Thomas Broberg, Volvo Car Corporation?s senior safety technical advisor. He?s based in Goteborg, Sweden and works at Volvo?s Safety Centre. ?The XC60 actually has eyes; it monitors what?s going on around you.?

Volvo takes safety seriously, and has done since 1927 when the company?s founders Assar Gabrielsson and Gustaf Larson stated: ?Cars are driven by people. Therefore the guiding principle behind everything we make at Volvo is ? and must remain ? safety.?

The Volvo Safety Centre studies real-life crash statistics, and according to their research 75 per cent of all reported collisions occur at speeds of up to 30 km/h. In 50 per cent of those cases the driver didn?t react because they were distracted.

?In some situations where a driver is not responding the car can help out,? Broberg says of City Safety.

Essentially, City Safety is in operation at speeds up to 30 km/h. Using a laser sensor integrated into the front windshield, City Safety can help prepare the Volvo to slow or down or stop if the vehicle in front brakes suddenly. The laser can detect vehicles and other objects up to 10 metres from the XC60?s front bumper.

City Safety makes 50 calculations a second based on the size of the gap and the speed of the XC60, to determine what braking force is needed to avoid a collision. If the XC60 driver fails to respond in a timely manner City Safety will engage the brakes, reduce the throttle opening and activate the brake lights.

Sounds sort of Orwellian. But Broberg maintains that the driver is always in control, and that no system will take that control away.

?The system is interacting with the driver, and it has to be intuitive,? Broberg says. ?City Safety will assist only if the driver isn?t doing something themselves ? with the right information and technology we can assist a driver out of a critical situation.?

In 2005 according to Transport Canada?s Motor Vehicle Traffic Statistics there were 210,629 total injuries due to collisions, and 2,578 of those were fatal. Those numbers are down since 1986, when there were 265,160 total injuries and 3,510 fatalities.

But for Broberg, who cites some rather high U.S. numbers, ?Safety is not a problem, it?s an epidemic.?

That?s why City Safety joins a long line of other historical Volvo safety innovations, including the first three-point seat belts in 1959, head restraints in 1968, anti-locking brakes in 1984, seat belt pre-tensioners in 1987, side impact air bags in 1991 and the Blind Spot Information System ? or BLIS ? in 2004.

?We look at it as a holistic approach to vehicle safety, where technology is the enabler,? Broberg says. ?We address driver (safety) needs based on what we see in the field, and then ask ourselves if there is technology that will help us target those needs.?