This story first appeared in the Calgary Herald’s Driving section on Feb. 22, a day before Vinnie DiMartino visited Calgary’s World of Wheels event. 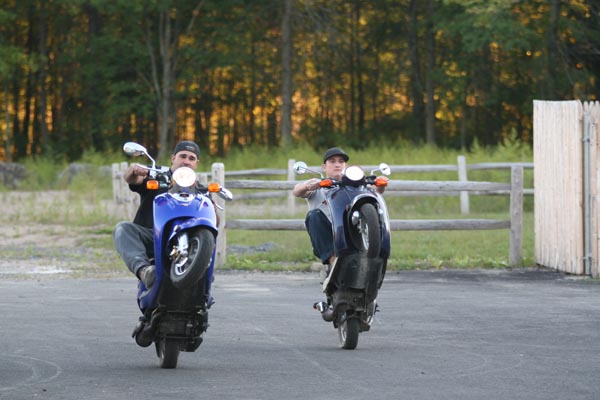 Fans of television?s bike building show American Chopper are sure to have noticed the departure of two familiar faces.
Both Vinnie DiMartino and Cody Connelly left the employment of Orange County Choppers (OCC) and have struck out on their own. In their new shop, V-Force Customs, DiMartino is prepared to continue building and fabricating custom motorcycles (vforcecustoms.com).
While DiMartino is no longer on TV, he will be in Calgary this weekend, with two appearances at the 42 nd annual World of Wheels at the Roundup Centre at Stampede Park. He?s scheduled to greet the public and sign autographs on Saturday only from 2 to 5 p.m. and again from 7 to 9 p.m.
Bike builder/fabricator DiMartino isn?t focused on his past. Rather, his sights are set on the road that?s laid out ahead of him.
?I spared no expense getting this shop the way I wanted it,? DiMartino said from his Rock Tavern, New York shop.
After making the break from OCC DiMartino spent a month with his lawyers, learning just what he could and couldn?t do as a result of some contracts he?d signed. But it was fairly obvious that opening up his own shop where he had creative control was the end goal.
?I am a motor head,? DiMartino said. ?And I always wanted my own shop.?
At first DiMartino located a building that was somewhat suitable for his purposes, and he spent a little money fixing it up. In the back of his mind, though, he knew he?d eventually have to relocate. Then, an old high school friend got in touch and told DiMartino about a brand new 14,000 sq. ft. industrial facility he?d just built.
?I knew this was the place I should be,? DiMartino said of the 5,000 sq. ft. bay he?s leased in the building.
With help from family and friends V-Force Customs opened late in 2007. And thanks to several sponsors V-Force Customs is equipped with a full complement of machine tools, including a Bridgeport CNC mill, numerous Lincoln Electric welders, and a Flow Waterjet machine.
All of this equipment is being put to good use. DiMartino and Connelly are putting the finishing touches on a machine they refer to as V-Force One ? the first bike finished in the new shop. According to DiMartino, the machine will be unveiled at Daytona Beach Bike Week on Mar. 1. After that, the bike tours 10 of the most popular motorcycle rallies in North America. At each event patrons can enter to win the machine, and a final draw will be made at Daytona in 2009.
?It?s a great way to get back out there,? DiMartino said. ?There?s so much hype about my first bike, I didn?t even really want to have to deal with that. This way, I get to build my first bike, parade it around, and then give it away.
?(I don?t think there was) a better route we could have gone.?
But DiMartino is looking forward to new opportunities with V-Force Customs ? perhaps even moving beyond motorcycles and building cars.
?I?ve got all the tools and equipment ? it?s freedom, actually. And maybe I won?t ever build cars, but I?ve got all the equipment to do it if I choose,? he said.
DiMartino is happy to be working in his new shop with Connelly, and doesn?t plan on spreading himself thin with too many projects. ?We?re starting off with some cool motorcycles, and I?d be happy building just five or 10 (bikes) a year.?