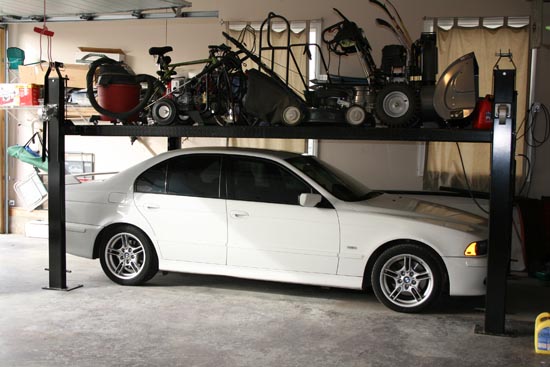 It’s entirely possible to double the storage capacity of a garage — and you won’t have to apply for a building permit, or spend thousands of dollars constructing a new one.
Calgary company Lift King offers a variety of automotive lifts, or hoists (liftking.ca). Once seen only in mechanic’s bays, two and four-post automotive lifts are now available to the average consumer.
Essentially, a lift allows one car — or any variety of other equipment such as ATVs, motorcycles, lawn equipment or even a boat — to be stored above another vehicle. Lift King owner Ross Cameron, a 35 year-old Calgarian and self-proclaimed gearhead with cars such as a 1969 SS396 Chevelle, 1969 Corvette Stingray and 1970 Pontiac GTO convertible, was in the market for a lift two years ago.
“I was at a friend’s house and we were talking and he was showing me the lift he had in his garage,” Cameron says. “He had a car up in the air and I leaned on the lift and the unit started to waver.”
Cameron wasn’t impressed. First, he felt his friend had overpaid for the lift, and second, the unit was of poor quality.
“Safety is a big issue for me,” Cameron says. “If you have a toy up there, and if it ever hurt somebody — that wouldn’t be good.”
So Cameron — who also owns Calgary’s Floor King — used his extensive import and export contacts to track down a better-made, higher quality automotive lift at a reasonable price. He visited every Asian factory he could where lifts were being produced. After inspecting each maker and satisfying himself about the quality of the product, Cameron placed an order with one manufacturer for a container of lifts.
“There are 24 units in each container,” Cameron says. “At first, the lifts sold to friends, and to friends of friends. It was a hobby in the beginning, but (Lift King) has evolved into something I really enjoy.”
In fact, he’s expanded his Lift King range of garage equipment to include tire changing machines, stainless steel cabinets and a tough PVC snap-together floor tile.
While Cameron isn’t the first to market lifts in Canada, he might be the first to take the units mainstream. He says lifts have gone from being used by enthusiasts and hobbyists — for routine maintenance or storing a car — to the general homeowner to help free up garage space.
For example, Cameron says he frequently hears from customers who have two cars, and a two-car garage.
“Your average two car garage is full of equipment, either lawn gear or bikes and sports gear,” he says. “And that really only leaves room for one car at a time in the garage.”
With a lift, Cameron says the bulk of the gear can be placed on the lift deck and raised above the floor. The second car — the one that often sat in the driveway — will fit underneath the equipment and inside the garage.
Cameron currently offers numerous residential lifts, but the most popular is the Pro King 8. The unit is available to operate on either 110 volts (standard household outlet) or 220 volts (special household wiring required). The unit is electric over hydraulic, and the push of a button raises and lowers the deck. Available in black, red or blue, Cameron says he can also custom order the unit in a colour to match a customer’s garage.
The Pro King 8 is a four-post lift — which means there is a steel column at each corner of the rig. There is 236 cm of space between side columns at front and rear, which allows the average sedan to slot in quite nicely. It has a lifting capacity of 3,629 kg, and in its top locked position offers 180 cm of space underneath. The lift deck locks at 10 different heights, including the top position. Cameron’s Pro King 8 retails for $2,795 before GST.
The lift comes pre-assembled in large pieces, but still requires final assembly. Lift King is available to install their units.
Cameron has expanded Lift King into Vancouver, B.C., and Sydney, Australia. He will be opening soon in Saskatoon, Sask. 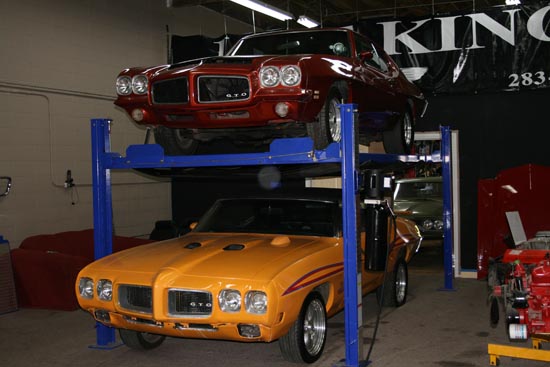