Nothing causes heads to turn quite like a classic vehicle rolling down the street.
Paint it bright green and slap your company name on the side, and you’ve got the ideal rolling promotion campaign.
At least, that’s what the folks at Steam Whistle Brewing have learned.
“We acquired our first vintage vehicle shortly after we opened the business,” explains Greg Taylor, 45, Steam Whistle co-founder. “It was a 1949 International stake-side truck. And it was effective at making people smile.”
In 2000 Steam Whistle Brewing got its start in Toronto. The founders, Taylor, Cam Heaps and Greg Cromwell had all worked at the same microbrewery in the 1990s. They soon found themselves out of work when a big-name brewing company bought out the business. Sitting around the campfire while on a canoe trip they started talking about owning their own brew company – and brewing one really good beer.
And that brewery is Steam Whistle.
There’s a distinctly vintage feel about the entire company. The Pilsner beer is brewed in the old John St. Canadian Pacific Railway roundhouse in Toronto, and even the name is a throwback to a time when the blast of a steam whistle signaled the end of a workday.
And then there is Steam Whistle’s fleet of vintage vehicles.
There are eight old trucks and buses, all of them used on a daily basis to deliver Steam Whistle product to pubs and stores.
“Vintage vehicles represent our brand on the road,” Taylor says from his Toronto office. “The vehicles represent a simpler time and an age of innocence.”
There is a western connection to the Steam Whistle story. In 2005, Steam Whistle salesman Brad Goddard picked up a freshly restored and painted 1968 Chevy half-ton truck. With his twin brother, two suitcases and a few cases of beer, he drove the truck to Calgary.
“We picked up the truck from the body shop and drove straight to Calgary,” Goddard says. “It took us about three and a half days, and when we got here I had no idea where I was going to live. I stayed at the Sandman Hotel for a month and a half.
“I’ll never forget seeing the north end of Lake Superior, and the landscape at the border between Saskatchewan and Alberta.”
When he got his ‘company truck’ to Alberta one of the first things he did was obtain an Alberta plate. To do so, he had to get an Out of Province inspection. None of the mechanics he took the truck to felt comfortable performing the inspection – simply because the vehicle was so old.
That is, until he found a mechanic at Kirkham Automotive in southwest Calgary who knows the old Chevy and GMC trucks like the back of his hand.
“He was comfortable looking over the truck, and signing his name on the inspection certificate,” Goddard says.
All of the Steam Whistle vehicles – a fleet that consists of trucks, vans and buses — have a nickname. Goddard’s truck is called Betty – named in honour of Liz Fitzgerald, one of the company’s female brewers. Apparently, there are very few female brewers, and Fitzgerald is one of a handful in North America.
The other vehicles all have a nickname that describes one of their traits or a part of their personality. For instance, there is Lumpy, the 1949 International ¾ ton truck, who rides a little rough with his stiff suspension. Then there’s Shakey, a 1951 Chevrolet sedan delivery, so named because when Taylor bought the vehicle and drove it the five hours home it vibrated so much he woke up the next morning with a sore back.
The vintage fleet has all been restored, and Taylor says most of the trucks have newer engines and features such as power steering and power brakes.
“Some of them also have improved seating, and we’ve installed seat belts in them, too,” Taylor says. “We need these vehicles to run on a daily basis and not have them in a shop all of the time.”
Keeping Betty on the road in Calgary costs the company about $1,500 every six months, and the truck sees some 15,000 kilometres added to the odometer each year.
Goddard drives Betty year round, and the truck is used as a delivery vehicle and promotional tool. While parked at a recent Calgary Beer Fest some pranksters were seen dumping a bottle of beer into Betty’s gas tank.
“She hiccupped a bit, but the beer just blew right through her,” Goddard laughs.
Betty is equipped with a rebuilt 350 cubic inch engine, and Goddard says: “She’s not a show vehicle – she looks a bit Frankenstein underneath. Betty looks pretty, but she is a working truck.
“In the winter it’s not very warm, and in the summer it’s not very cool,” Goddard says of the driving experience, and adds, “The only way you stay cool is believing you look cool driving the truck.”
Steam Whistle’s Taylor says he finds the vintage vehicles through online auctions, and others are offered to the company from private owners. He’d like a vehicle from each decade, something that might speak to both young and old.
“What’s retro to one person might be recent for someone else,” Taylor says. “Some kids are calling early 1990s music retro, and I’m saying, ‘What?’”
Taylor is currently looking for a late 1970s or early 1980s full size van – one that would have had the ladder up the back door and a mural on each side.
“I’m interested in covering all demographics with our vintage fleet,” Taylor says. 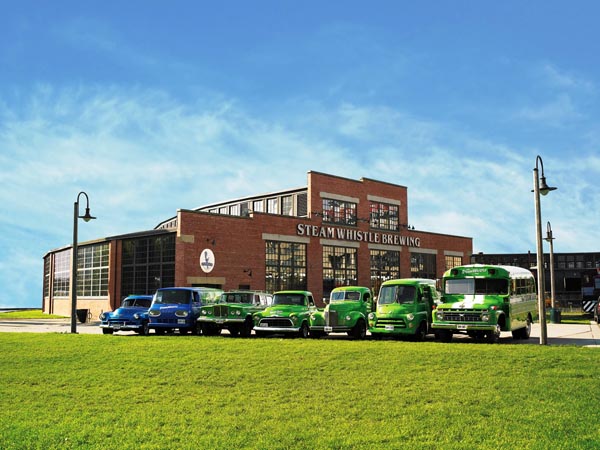