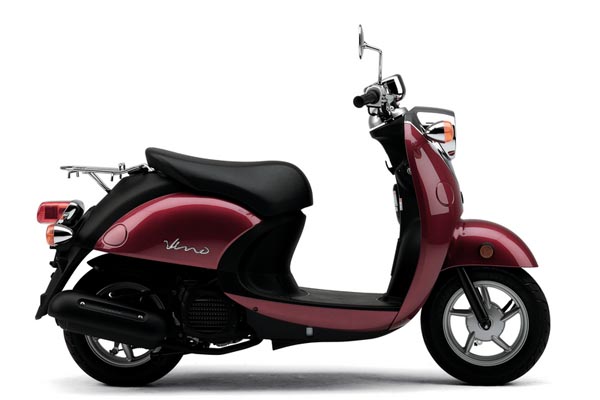 In the 1952 film Roman Holiday Audrey Hepburn and Gregory Peck tour the city aboard a Vespa scooter. Calgary isn’t Rome, and you won’t see Hepburn or Peck cruising a vibrant 17th Avenue, but scooters are popping up all over the urban landscape. Where at one time it would have been difficult to find a new scooter on a showroom floor, there is now a decent selection of brands and models available.
Joe Sousa, 58, owns and operates Motor City Fun in the city’s northeast. He sells scooters and motorcycles, and Sousa says owning a scooter makes sense.
“The summer is short here, but (while the weather’s good) scooters are so much fun to ride,” Sousa says. “And, scooters are so economical, and easier and cheaper to park than a car.”
Motor scooters come in a range of sizes, from small 50cc units usually used for urban commuting to large 650cc machines that can be used for touring. What scooters usually have in common are a step-through frame and floorboards for the feet and an automatic transmission.
In addition to recognized brands such as Honda, Suzuki and Yamaha, here is a primer of scooters currently available in the Canadian market.

AMG (www.amgplus.com)
Alliance Motor Group of Montreal, Que., produces two scooters for the Canadian market. The Nitro is a uniquely designed machine that looks more like a naked sport bike than a scooter. But thanks to its 49cc air-cooled four-stroke engine, made by well-known German maker Sachs, and automatic transmission the machine fits in the scooter ranks. The Nitro has a single disc brake up front and a drum brake out back. AMG’s other machine is the Boreal, powered by the same Sachs. The Boreal more closely resembles a traditional scooter with a step-through body and flat foot platform area. 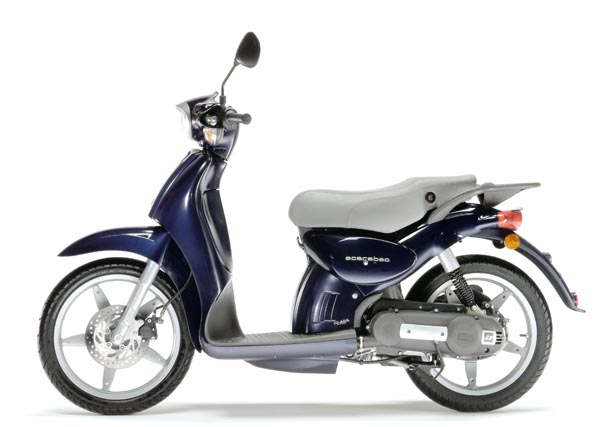 APRILIA (http://canada.aprilia.com)
This Italian maker offers the Scarabeo 50 Street, a scooter with a sure sense of style. The Scarabeo is powered by a 49.3cc two-stroke single cylinder air-cooled engine and delivers its power through an automatic transmission. Aprila also offers several four-stroke, larger capacity Scarabeo scooters.
The Scarabeo is unique in the scooter world thanks to its lower seat height and larger diameter 16-inch light alloy five-spoke wheels. Brakes are single hydraulic discs both front and rear.

CMI (www.cmitech.ca/en)
Canada Motor Import Inc. offers the Taiwanese-made SYM Mio 50, a four-stroke air-cooled single cylinder scoot with a step-through body design. Its engine measures in at 49.5cc’s, and like most other scooters of this size it has an automatic transmission.
CMI’s other scooter is a 250cc model that features a liquid-cooled four-stroke single cylinder engine. The SYM RV250 is defined by a futuristic design that sees stacked twin headlights, a windshield and 13-inch wheels with front and rear disc brakes.

E-TON (www.etoncanada.ca)
E-ton Canada has two scooters: the Beamer III and the Beamer Matrix II. Essentially the same scooter as the Beamer III, the Matrix II offers a lockable luggage box for the rear rack. The E-ton scoots are powered by a 49.3cc two-stroke single cylinder air-cooled engine, and feature a front disc brake and a rear drum brake.

HONDA (www.honda.ca)
Honda offers a complete line of step-through machines ranging in size from 50cc to 600cc. The small scooters are the Jazz and Ruckus — each powered by the same 49cc liquid-cooled four-stroke single cylinder engine. While they share the drivetrain, they differ greatly in their appearance. The Jazz has a European body style with an enclosed cargo area under the seat, while the Ruckus has an open, tube style rear frame with a platform under the seat for awkward to carry cargo — such as a skateboard.
Honda also markets the larger 250 Reflex, a scooter with a 249cc liquid cooled four-stroke single cylinder.
The largest scooter Honda sells is the 600cc Silverwing, a powerful machine that combines the best of scooter and motorcycle design. Powered by a 582cc parallel twin-cylinder engine with fuel injection and an automatic transmission the Silverwing is not only capable around town but is an efficient highway-touring machine.

HYOSUNG (www.nationalmotorsports.ca)
This Korean manufacturer began producing motorcycles and scooters in 1978. They now have four scooters in the Canadian market, the Sense, Rally, Prima and the new MS3 250. The first three scooters are powered by a 50cc, two-stroke, air-cooled single cylinder engine and transmit their power via an automatic drive system. Hyosung’s Rally scooter has a beefier look compared to the other two, with fatter tires and edgier styling. The MS3 250 is a larger machine with a 249cc liquid-cooled four-stroke single cylinder engine. Defined by a low seat height, twin headlights and futuristic body lines the MS3 would be great for commuting or short highway excursions.

KYMCO (www.kymco.com)
A Taiwanese company that has produced motorcycles and scooters since 1963, Kymco is the world’s fifth largest manufacturer of two-wheelers.
In Canada Kymco offers the Vitality 50cc 4T, People S50cc 4T (both feature four-stroke engines), Super 9, ZX50 (both with 50cc two-stroke engines), and Bet&Win 150cc and 250cc scooters (liquid-cooled four-stroke engines). Kymco literally makes a scooter for every purpose and taste. 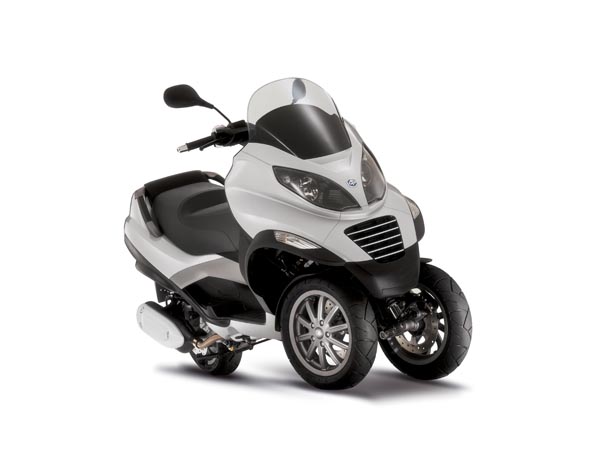 PIAGGIO (www.piaggiocanada.com)
While not the first manufacturer to introduce a three-wheeled scooter (British motorcycle maker Ariel introduced the Ariel Three in the early 1970s and Honda had the Gyro in the early 1980s), they are the first to have a single wheel out back and two up front. According to promo material the Piaggio MP3, as they have dubbed it; “redefine(s) the very concept of ride stability, providing an unprecedented riding experience. The independent parallelogram suspension of the two front wheels increase(s) stability and allow(s) this scooter to grip like no other”. A 250cc fuel-injected single cylinder engine provides motivation for the MP3.
Piaggio also markets the Fly 50, a lightweight 50cc scooter with contemporary Italian styling, powered by a two-stroke single cylinder engine.

SUZUKI (www.suzukicycles.com)
Big-bore scooters are what Suzuki’s all about with their Burgman line of machines. Suzuki first introduced the Burgman to the Canadian market in 2003, and now markets the 400, 650 and 650 Executive. A four-stroke, liquid-cooled, single-cylinder 400cc engine powers the Burgman 400, while the larger machines run a twin-cylinder 638cc, four-stroke, liquid-cooled engine. All Burgmans feature fuel injection and an automatic transmission for maximum performance and efficiency, and have a tremendous amount of luggage carrying capability.
According to totalmotorcycle.com, Suzuki has aimed these larger scooters at riders downsizing from bigger touring motorcycles such as the Honda Gold Wing.

YAMAHA (www.yamaha-motor.ca/products)
No other motorcycle maker offers as many scooters in the Canadian market as Yamaha, from 50cc urban scoots to 400cc commuter/highway machines. Yamaha’s most popular scooter is the BW 50. Powered by a 49cc two-stroke engine the BW 50 offers rugged practicality with big, fat tires and a minimum of plastic body panels.
Yamaha’s newest 50cc scooter is the C3 (it’s called the C Cubed), a boxy-style machine that is reminiscent of the old American-made Cushman. The C Cubed has a 49cc liquid-cooled four stroke single cylinder engine and offers plenty of under seat storage in its unique ‘cargo box’.
Also in the lineup is the Vino 50 and 125, scooters that feature retro styling coupled with modern four-stroke engine performance.
And Yamaha’s largest is the Majesty 400, which the company claims offers motorcycle performance with scooter utility. The Majesty uses a 395cc four-stroke single cylinder engine and automatic transmission for get up and go. 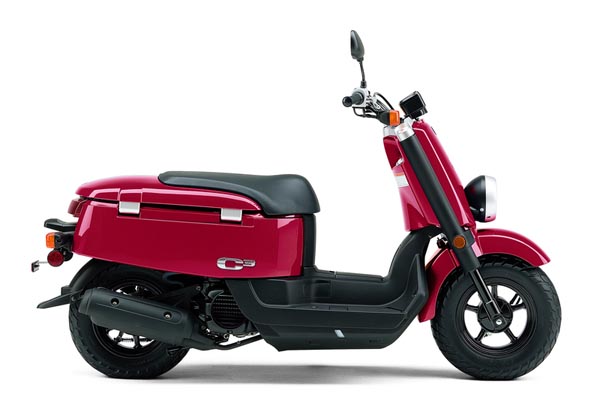 VESPA (www.vespacanada.com)
This Italian maker introduced its first scooter in 1946, and the iconic styling of that initial Vespa epitomizes what every other scooter since has looked like. Clean, simple lines define the new Vespa, which carry forward the tradition of the step through bodywork and handlebar mounted headlight. Vespa now offers the LX 50 (two-stroke 50cc) and 150 (four-stroke 150cc) scooters, and the design of these contemporary machines is closely linked to the original. Vespa also sells the GTV 250cc/LXV 150cc, GTS 250cc and Granturismo 200cc scooters.
While the Vespa is probably best suited for the urban market, more adventurous types wouldn’t have a problem with highway jaunts aboard the larger machines.

-Two-stroke vs. Four-stroke
There are advantages and disadvantages with both types of engines. Without going into techno-speak about how each engine operates, here’s all you need to know: a small scooter (50cc) is most likely powered by a two-stroke engine, because they make more horsepower, and are quicker to rev and accelerate than a four-stroke of the same size. A four-stroke engine, however, tends to be quieter, slightly more fuel-efficient and doesn’t require oil to be added to the fuel (either by pre-mix or injection).

-Clubs and Books
Calgary has its own scooter club, the Apocalypse Scooter Club (apocalypsesc.com). The Apocalypse SC hosts an annual rally, and the club meets for a ride every Tuesday at Caffe Beano, 1613 9 Street S.W. Meet and greet at 6:30 p.m., ride at 7 p.m.
For the real skinny on scooters pick up the new Complete Idiot’s Guide to Motor Scooters, by Bev Brinson and Bryce Ludwig of ScooterWorld Magazine.

-Scooter Safety
In Alberta, a Class 6 motorcycle license is not required to ride a scooter powered by an engine less than 50cc. Anything over 50cc requires a motorcycle license; many motorcycle riding schools offer scooter-specific training courses. Scooters are easier to ride than motorcycles, thanks to their automatic transmissions and twist and go operation. That said, proper protective gear such as a helmet and gloves are required for scooter riding — but for true European flair be sure to wear a scarf. 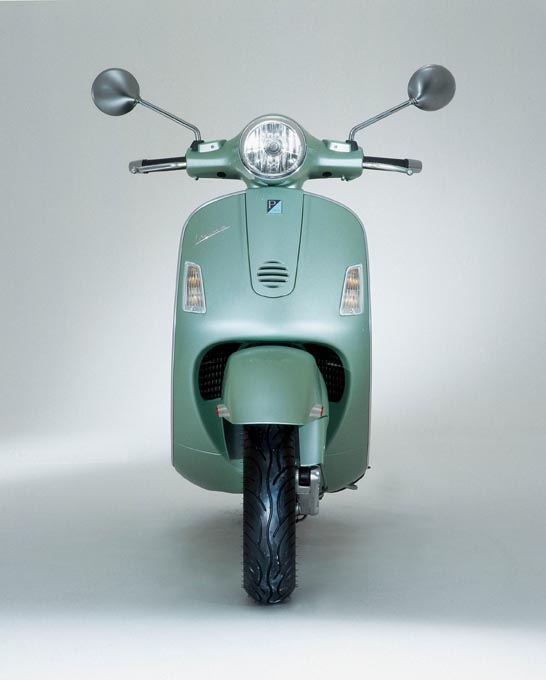