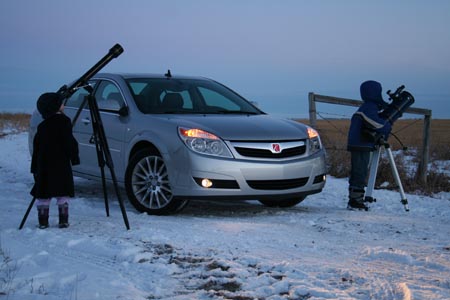 It?s a rare occasion when a vehicle looks more expensive than it is.
But such is the case with the brand-new for 2007 Saturn Aura.
Wayne Andrews, a 45-year old software product manager, is a Calgary driver with a penchant for high-performance rear wheel or all wheel drive sports sedans. He spent a week behind the wheel of an Aura XR, and he figures the car really does look rather posh.
Upon picking up the vehicle, Andrews says: ?I was immediately struck by its taut, graceful shape. It looks nothing like its Pontiac G6 and Chevy Malibu stablemates, nor for that matter any of its North American or Asian competition.? 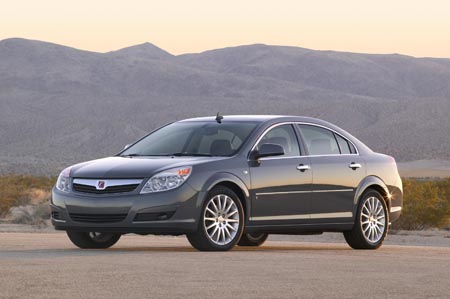 He figures that fact alone should attract buyers in the rather staid mid-size sedan segment that includes the Honda Accord, Toyota Camry, Nissan Altima and Hyundai Sonata. ?And, in my opinion, only the new Altima can compete with the Aura in sheer sporty good looks,? he says.
And the Aura is receiving critical acclaim. The Saturn Aura was voted the 2007 North American Car of the Year, beating out other finalists including the Infiniti G35, Mercedes-Benz S-Class and the redesigned Toyota Camry.
In 2005 thanks to steadily declining sales General Motors? Saturn division cancelled production of its previous sedan, the L-series. The company headed in a new direction, moving to all-steel bodies ? no more dent-resistant polymer panels — and updated design architecture. Elements of its successful Sky roadster, including the jewel-like headlamps and chrome grille bar, help define the Aura as a member of the freshened-up Saturn family.
?The Aura looks long and low, and has high door sills and shallow side window glass,? Andrews says. ?And, it has short front and rear overhangs, and I like that kind of appearance.?
Andrews says the 18-inch aluminum rims complemented the overall classy look of the car, and helped fill up the wheel wells of the Aura.
There are two versions of the Aura available, the XE and the XR. The XE trim level is powered by a 3.5-litre OHV V6, which produces 224 horsepower. Meanwhile, the XR features a bit peppier 3.6-L DOHC V6 that makes 252 h.p. at 6,300 r.p.m. and 251 lb.-ft. torque at 3,200 r.p.m.
The XR?s 3.6-L engine is paired up with a six-speed automatic transmission that sends power to the front wheels.
?The engine was strong, smooth and torquey,? Andrews says, and adds: ?I found I had better access to power by selecting my own gears using the tapshift paddle shifting feature. Fun for a while, but I expect for most drivers that novelty would wear off quickly.?
Andrews says he spends 95 per cent of his driving time commuting, traveling from McKenzie to downtown Calgary five days a week. He just traded in his 1998 Ford Contour and bought a 2003 Infiniti G35 Aero sedan. When shopping he says a vehicle must be ?interesting and fun to drive. I like sports sedans or AWD sedans because (the car) has to do double duty ? I need a four door car with a reasonable amount of room in the back seat, as it has to accommodate the family on certain occasions.?
Andrews has two children, son Ian, eight, and daughter Emma, six. His wife Laurie currently drives a 1999 Ford Expedition.
While Andrews drove the Aura XR around Calgary, he also got the car out on the highway to Medicine Hat. He and a colleague drove to the southeast Alberta city for a business meeting.
?The Aura has great highway manners,? Andrews says. ?It was comfortable and quiet enough for me to carry on a conversation with my soft-spoken colleague.
?We also spent part of the trip listening to the fine-sounding AM/FM/CD/satellite radio. The return trip we drove in one stint, that?s three hours in the saddle with no discomfort or fatigue, a real credit to the Aura?s civility.? 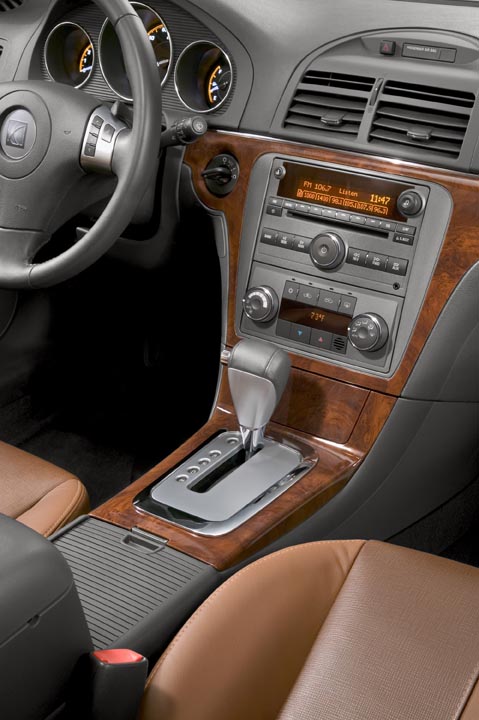 For Andrews, the ride was agreeably firm and sporty. The brakes, however, were a little vague, with an excessive amount of pressure on the pedal required for a small amount of stopping power. He also didn?t care for the front wheel drive powertrain, but that?s just his personal preference for rear wheel or all wheel drive vehicles.
He found the Aura luxurious, and thought the leather on the seats was plush. Andrews adds: ?The interior was very well put together, and I never perceived a plastic feeling.?
As driven, Andrews? Aura featured niceties including steering wheel audio controls, eight-way adjustable driver seat, rear audio controls with a pair of wireless headphones and the $1,285 premium trim package, the $1,195 power sliding glass sunroof, and the $660 comfort package ? for a total of $35,570. The premium package adds leather seats and leather wrapped steering wheel and shift knob while the comfort package includes a six-way power adjustable passenger seat and power adjustable pedals.
When Andrews had the whole family in the car the kids found there was plenty of room in the back seat, and wife Laurie thought the car was easy to get into.
Although Andrews enjoyed driving the Saturn Aura XR for a week, his final opinion is: ?It?s not perfect for me. I could be quite happy driving one, but given a choice I?d go a different direction.?
So who?s perfect for the Aura? Andrews says, ?It?s an awesome car for a family, with enough room for four people, and it?s fun for dad to drive.
?I also think the Aura is more than good value for the money. It?s comfortable, roomy, powerful. I went to the Saturn website and put every option on the car I could think of, and had a hard time to get it over $35,000.?

NOTES FROM WAYNE ANDREWS SEVEN-DAY DRIVER?S JOURNAL
– The black leather seats look inviting and the pewter-look wraparound trim that extends to the rear cabin gives the interior a cohesive look.
– If you are looking for a floaty Buick-like ride, this is not your car. In XR trim, Saturn specs a firmer suspension, 18-inch wheels and low-profile 50-series rubber. Since I prefer a sportier ride, this suits me fine. Even so, crossing railroad tracks at 100 km/h caused no jarring or undue noise.
– All-wheel drive would make this car a four-season treat. While I?m noting seasonal quibbles, the door design both front and rear allows snow to fall on the seats when you open the doors.
– The Aura?s first practical chore was to fetch a six-inch Newtonian reflector telescope from another part of the city. I was skeptical the trunk would be sufficiently roomy for the 50 inch tube and hefty pedestal stand, (but) everything went in fine, despite a slightly high liftover and small trunk opening. The rear seat folds forward for even more cargo length, which is good news for skiers. The side cargo nets in the trunk were handy for small objects, but tended to snag easily.
– The combination of adjustable pedals and tilt/telescoping wheel make finding the perfect driving position a snap, though I have to say the plastic steering column surround looks out of place in this car?s handsome interior.
– Some final small criticisms. Why do the door handle recesses illuminate at night while I?m driving 110, then turn off when parked and I actually need them?
– Would I buy this car? Were I looking for an affordable, high-feature front drive family car, I would absolutely buy the attractive, sporty Aura. However, I personally still plan to hold out for a rear- or all-wheel-drive sports sedan (Andrews? wrote this prior to obtaining his Infiniti G35). Then again, should an Aura Redline (no news of this happening) come to market with 300 h.p. and all wheel drive, I reserve the right to change my mind. 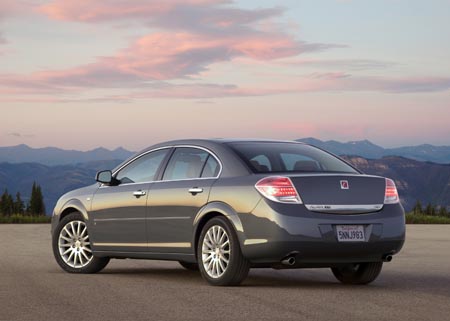 IN IT FOR THE LONG HAUL
Jason Hansen can?t believe he bought a Saturn. The 34-year old customer success manager at IT SportsNet says he grew up thinking his first brand new car was going to be an import. But buy a Saturn he did. Last fall he purchased a 2007 Saturn XE at Saturn Saab of Calgary Northeast, and has since put 7,500 km on the odometer.
Q: Why the Saturn Aura?
A: I was at Saturn Saab of Calgary Northeast test-driving a Saab 9-2X, and I saw the Aura out front. I had vaguely heard about the Aura, as my group of friends and I are always talking about cars. I took a look at the features and the price, and then took it for a test drive. I couldn?t believe it, I was floored that it was a Saturn. It was so well featured and the price was right. I waited a week and looked at other vehicles but I came back to the Saturn.
Q: What else did you look at?
A: I had my spreadsheet with the Mazda3Sport, Honda Accord and Toyota Camry, but even the base four-cylinder models were out of my price range. With the Saturn Aura there was just so much car for the money. My car, even though it?s a base model, came pretty well loaded with On-Star, CD player with MP3, air conditioning and power everything.
Q: Do you have a favourite feature?
A: Oh, that?s a tough question to answer, it?s really hard to pick just one. But I guess it would have to be the car?s ride. It?s so supple yet very responsive, with an amazingly well tuned suspension. And the interior; it?s like a bank vault in their. It?s so quiet I can hear myself breathing while I?m driving.
Q: So, obviously there are no regrets?
A: Not a single regret, nope.