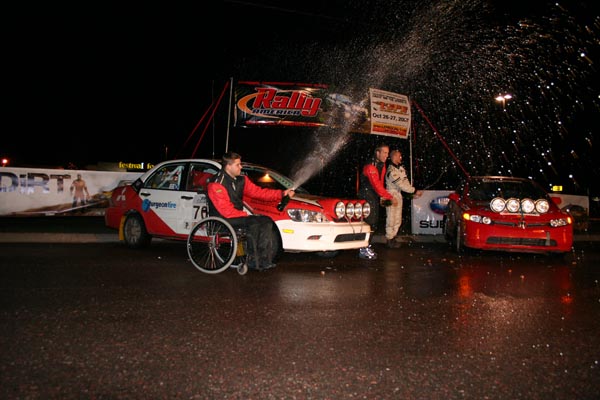 Photo courtesy Carrie Carlson — Zedril Racing at the Lake Superior Rally in Northern Michigan for the 2007 Rally-America national championship, where they clinched the Production title.

Co-driver Jody Zedril is pretty humble about his achievements in the off-road sport of rallying.
The 33-year old Winnipeg man is a paraplegic, and he hasn’t let his disability interfere with his need for speed. But as far as he’s aware, he’s the first and currently the only paraplegic actively competing in North American rally events.
This weekend, Zedril and his brother/driver Jan will be in Calgary to compete with their specially equipped 2003 Mitsubishi Lancer in the 35 th Rocky Mountain Rally (www.rockymountainrally.com). Presented by Subaru, the Rocky Mountain Rally is Round 2 of the Canadian Rally Championship. Running May 23 and 24, a special spectator stage is at Race City Speedway this evening. On Saturday, the action moves to the Porcupine Hills forestry area.
That it was a bit of a challenge for Zedril to get actively involved in rallying shouldn’t be a surprise.
“(Rally’s) not a sport to be taken lightly,” Zedril says during a telephone interview. “Extensive off-road experience is a definite asset, and should almost be a requirement. Even for an able-bodied individual, there are a lot of hoops one has to go through, including a first aid certificate, eye exam and approval from your physician, which was a hurdle in itself.”
Zedril crashed his dirt bike in July 1995. He was practicing prior to a motocross race and came up short on a double jump.
“I knew right away what I’d done was serious,” Zedril says. “I waited and hoped the feeling would come back — I was conscious the whole time.”
He was 21 years old, and the feeling never came back. He’d broken his spine at the T6-T7 vertebrae, and would never walk again.
Zedril’s life had been off road motorsport from a young age — he was riding his first dirt bike before he could even reach the footpegs, eventually competing in motocross action when he was nine. But he knew the risks associated with the sport, and says he kept telling himself something serious could happen.
“I was ready for it,” Zedril simply says of the accident. “If you’re not ready for it, that’s when your life could fall apart.”
Trained as a civil engineering technologist at the time of the crash, after his recovery Zedril attempted to go back to work in that field but found it difficult to do. In 1997 he opened a computer company, and now builds custom computer systems.

“My brother Jan and I have always been interested in the Dakar rally, for longer than we can remember,” Zedril says. ‘But our lives were centred on motorcross, and there wasn’t room for much else.
“After I got hurt, that opened up the doors for other things to do.”
The brothers talked about Dakar (similar to rally) racing, and started looking around for something a little closer to home. That’s when they discovered there were rally events taking place south of the border in Minnesota — about four hours drive form Winnipeg.
“As soon as we found out about that, everything snowballed from there,” Zedril says. From 2001 to 2005 the Zedril’s attended as many rallies as possible, volunteering at events and becoming familiar with rally rules, organizers and officials.
“I knew it was going to be extremely difficult to get into a rally car (and race) if officials and organizers didn’t see what we were made of, so to speak,’ he says.
In order for Zedril to participate, he had to prove he could get out of a car — and not just out the door, but out through a side window — within 12 to 15 seconds. While officials didn’t require the Zedril’s to upgrade or modify safety equipment in the car, they’ve gone ahead and done so regardless. They carry multiple fire extinguishers, glass breakers and harness cutters. They’ve installed an onboard electronic fire extinguishing system, ham radio outfit and a horn for the co-driver.
It wasn’t easy, but the Zedril’s were given clearance to race — and that’s a responsibility Zedril himself doesn’t take lightly. The brother’s are doing very well. Last year, they were Rally America Production Class National Champions, and were North American Production Class Champions.
For those wondering what living life in a wheelchair might be like, the Rick Hansen Wheels In Motion event on June 8 at Calgary’s Rotary Challenger Park would prove interesting. Several events are designed to help put into perspective daily living in a wheelchair — as Zedril does. Check www.wheelsinmotion.org for Rick Hansen information.
For general Rocky Mountain Rally information, call 277-6382. 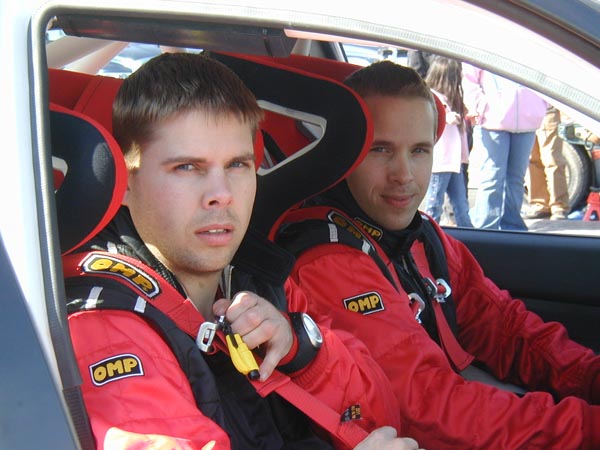 Story first published in the Calgary Herald Driving.ca section May 23, 2008