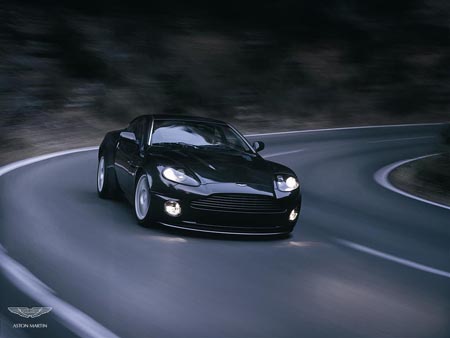 The 2007 Aston Martin Vanquish will be on display Mar. 14 to 18 at the Calgary International Auto and Truck Show.

It?s auto show time.
Calgary?s International Auto and Truck show rolls into the Roundup Centre this month, and the display offers a glimpse at all of the new 2007 vehicles, plus some of the 2008 models.
From March 14 to 18 every major auto manufacturer will show off the latest in sheet metal, paint, pistons and gears (www.calgarymotordealers.com).
For 2007 the list of concept and future production vehicles under the spotlight includes the Jeep Gladiator, Hummer H3T (the pickup truck version of the large SUV), Ford Super Chief and Fairlane and Chevrolet Camaro. A couple of the 2008 vehicles to be shown include the Buick Enclave and the Lexus LS600HL hybrid.
While the mainstream manufacturers will take up every nook and cranny of the halls in the Roundup Centre some special interest makers will show their wares in the Corral. The list includes the Aston Martin Vantage and Vanquish, Bentley GT coupe and GTC convertible, Lotus Exige S, Lamborghini Murcielago LP640, Maserati Quattroporte, Ferrari 430 coupe, Saleen S281 Mustang and 331 Sport Truck.
Perhaps the best way to get up close and personal with the new iron is to take in the Vehicles and Violins gala. This event is something of an enchanted evening of music and food. Select groups of musicians from the Calgary Philharmonic Orchestra play their strings and horns amongst the displays. A variety of international cuisine is provided at buffets stationed throughout the exhibit, but the automobiles are really the stars of the evening.
Now in its eighth year Vehicles and Violins is, in essence, a fundraiser for local charities. This year the recipients of funds raised are the Alberta Adolescent Recovery Centre (AARC) and the Missing Children Society of Canada.
Vehicles and Violins began in 2000, when the event raised $73,500 for the CPO?s Heartstrings program. Every year since the Calgary Motor Dealers Association (CMDA) has selected two worthy charities that share the funds, including the Kids Cancer Care Foundation of Alberta, Canadian Breast Cancer Foundation, Prostate Cancer Institute of Calgary, Alberta Children?s Hospital, Heart and Stroke Foundation of Alberta, NWT and Nunavut and the Canadian Diabetes Foundation.
More than $1,160,000 has been donated since the gala?s inception.
Tickets for Vehicles and Violins are on sale until March 9, and are $150 each. They can be had by calling 974-0710 or by emailing cmda@telus.net.
The Calgary International Auto and Truck show officially opens on March 14 and runs to the 18. Tickets are $11 for adults, $7 for seniors and youth, $3 children six to 11, free for children under six. A family of four pass, two adults and two youths, is $25.00.

As published in the Calgary Herald’s Driving.ca section…