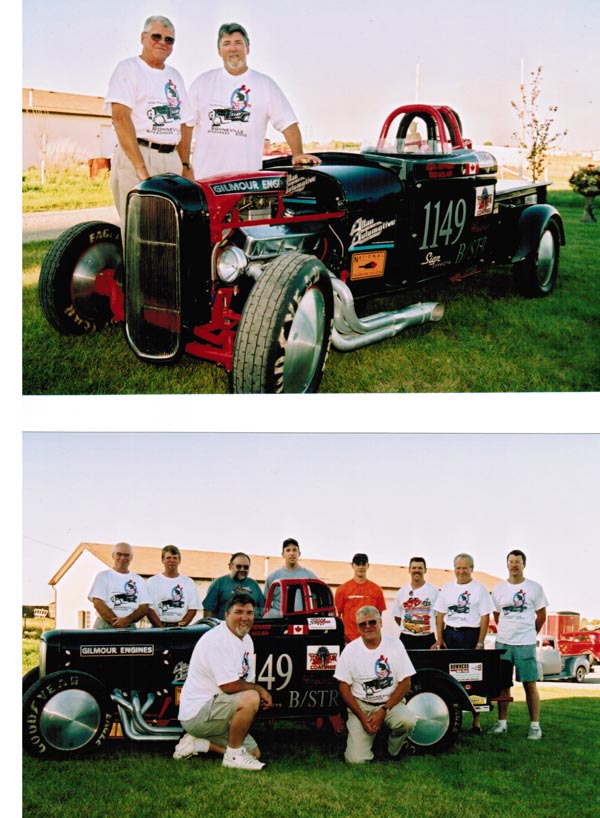 Top photo: Don Siewert on the left, Ted Allan on the right. If memory serves, these photos were taken in the fall of 2002 after the North of 49 returned from Bonneville.

Everyone has something they love to do.
But it’s not very often that we are lucky enough that our passion and our life’s work are the same.
Calgarian Don Siewert is one of the lucky ones. Hotrodding has long been Siewert’s obsession, and just about everything he has ever done has given him the skills necessary to build cars.
Now, Siewert is being recognized for his passion. When he opened his mail last week Siewert, 74, was overwhelmed at news he will be inducted into the Canadian Street Rodding Hall of Fame (CSRHoF).
“This is something that I never thought would happen,” Siewert said during a telephone interview from his home in southwest Calgary. “You just do what you’re doing, and life kind of goes on. But this award does elevate you, and makes you realize life is very good.”
Siewert was born on a farm just north of Drumheller. At 17 he wanted to drop out of school but his parents insisted he get an education. After graduation he enrolled at SAIT in what was called the Farm Construction program – Siewert said this related to all of the machinery found on the farm.
At much the same time Siewert was looking for a set of wheels. He was 18 or 19 when the first car he had, a 1933 Chev coupe, blew its motor. A 1935 Ford truck was his next vehicle. The first thing he did was yank out the original 60 horsepower, 136 cubic inch Ford motor and install a 110 h.p. 255 cubic inch Mercury engine.
“I had a hotrod,” Siewert said, and laughed. “That little Ford truck was the indoctrination.”
The Farm Construction program gave Siewert time towards his apprenticeship, and at 20 he left SAIT with his journeyman ticket as a licensed mechanic. That led him to a job at Currie Barracks, where he could quickly grind a set of valves on a Bren gun carrier – not an easy task.
From servicing engines Siewert moved on to autobody work, and he eventually received his ticket in that field. He then worked for the City of Calgary as a vehicle painter for two years. Next, he became an insurance damage appraiser, and then he worked again as a painter, but this time he finished wooden desks and furniture.
“That kind of rounded out my trade career,” Siewert said.
He used to rent a garage in Sunalta where he built hotrods and lead sleds. Now he has his own double car garage as a workshop, and he has even performed some restorations. In fact, he went from building hotrods to restoring some Ford Model As and Ts to bone stock original. Siewert also restored more than a dozen early Mustangs.
“I’ve always had the hotrodder instinct, but I like my old original stuff, too,” Siewert said. “I’m not content with buying pieces and putting them on a car, I’m content handcrafting pieces that are made to fit, and there’s a lot to be said about that. I like to have my signature on a car in the parts that I build.”
He turned hotroddng into a family affair. Siewert has built cars with his sons, and now the grandchildren are getting involved – especially now that he has been racing with the North of 49 Bonneville team (www.1149.ca). The Bonneville Salt Flats are legendary in hotrodding circles – the flats offer a venue where a builder can find out just how fast the car or motorcycle they have built will really go.
“At the Foothills Street Rod Association meetings a fellow would talk about Bonneville,” Siewert said. “I said I don’t even want to go down and look, because I knew I would be hooked if I saw the flats.”
Siewert once read about Bonneville in a 1950s Hot Rod magazine article.
“I never forgot about reading about the salt,” Siewert said. “So, in 1998 I went and looked. It’s such a self-rewarding sport, everything is measured by your ability to build, and I fell in love with the idea and decided maybe I should try and create a salt flat racer.”
He realized he couldn’t do this by himself, so in 2001 he took Ted Allan of Allan Rod & Custom down to Bonneville – and the salt bug bit Allan.
“I had a 1928 Ford Model A truck body, and we hit everybody we could hit for parts,” Siewert recalled. “A great group of friends wanted to be a part of this, and they became committed to helping us out.”
A race truck was fabricated in less than a year, and the team raced in 2002 and learned some valuable lessons. While they didn’t break 200 mph, they came close, and when they got home they regrouped.
The truck that the North of 49 team built currently features a 427 cubic inch Chev engine capable of pulling 840 h.p. Backing up the engine is a 350 Chev automatic transmission. In 2007 at Bonneville Siewert piloted the truck to its fastest recorded speed of 210.5 mph.
Each year the team has raced at Bonneville Siewert has driven his 1930 Ford Model A Roadster hotrod down to the event.
“We drive it in the rain, it’s no big deal for us,” Siewert said. “Bonneville, for me, was all about driving down to Utah in the Roadster, being on the salt, and driving the race truck. And, for us Bonneville was a family affair.”
For the last 10 years Siewert has also shared his passion with students as a teaching assistant in high school auto shops.
In early October Siewert heads to Waterdown, Ontario to collect his accolade.
According to the CSRHoF website (www.csrhof.com/index.html) the Hall of Fame has existed since 1993, “To help guide the future of street rodding by recognizing the individuals, groups and corporations who have made a significant contribution in the past to the development of the hobby in Canada on a local, regional or national basis.”
Siewert said: “It’s really quite an honour.”