To the man on the street the name Harley-Davidson is synonymous with motorcycles. Note: There are other motorcycle makers out there.
But it?s not surprising, given Harley-Davidson is the longest continuously producing motorcycle manufacturer ? in 1903 William S. Harley and Arthur Davidson built their first bike in a wooden shed in Milwaukee.
Since 1903 the Motor Company, as it is sometimes called, has come a long way. While the road has had its share of potholes and speed bumps Harley-Davidson is still running at full throttle.
When Deeley Harley-Davidson Canada offered their fleet of demo-test motorcycles to the Herald, we could only choose three People?s Test Riders, and just three motorcycles from the list of 20. Luckily, each rider selected a completely different bike, so there was no squabbling over who got to ride what. And, although the machines were only available for a one-day ride, our testers put the motorcycles through their paces. 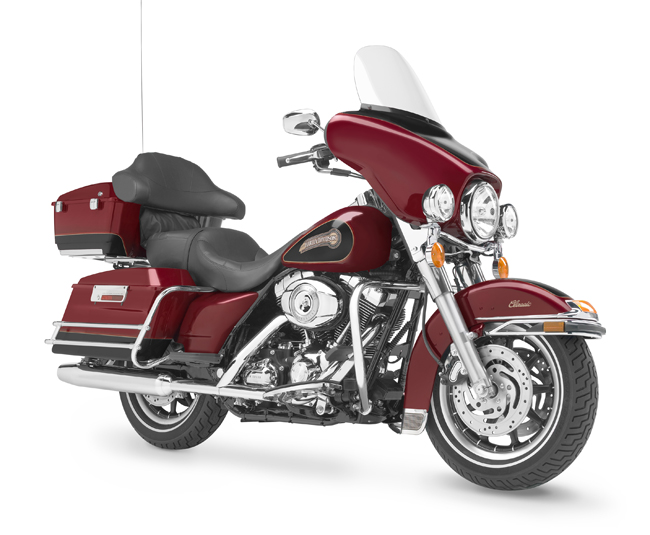 Who are you? Pierre Lamarche, 56, retired.

How long riding? Since I was 16 years old, so 40 years. I enjoy sport touring, with an emphasis on the touring. I?ve owned (Yamaha) Fj1200s and BMW RS series machines, have been across the country a few times and down into the States. But I can?t ride that style of motorcycle anymore, as I?ve had my left knee replaced and my right knee will let me know in short order if the position is not right. I may have to look at purchasing a cruiser-style motorcycle ? my days of trading up to the meanest, fastest, ego-gratifying machine are long gone.

Did you like the look of the Electra Glide? In a way, yes I did. I?ve never been a fan of the fairing shape on the Electra Glide, but on this bike with the combination of chrome and two-tone paint scheme?what can I say? It?s an impressive looking piece.

Getting aboard; how did it feel? I was quite concerned at first with the saddlebags and top box ? I didn?t want to drag a boot across them — but it was easy on and off because of the low seat height. This is a bike you sit in; you don?t sit on top of it.

Riding (handling, suspension, motor/transmission, brakes): I found there was a bit of an inherent weave at around 120 km/h, and I?m sure it?s fairing related. It was never scary, but you know it?s there. The suspension was very compliant at both ends, and is plush and forgiving in a Cadillac kind of way. The engine characteristically is all about torque, and there was no driveline lash. Sixth gear in the transmission is strictly an overdrive, you have to change down for passing. Front brakes offered good stopping power without excessive squeezing (of the brake lever). The rear brake is very powerful, and will lock the rear wheel with little warning.

Stepping off and your gut reaction? On a sport bike, after you?ve stopped, you always feel a bit of what I call ?buzzy brain?. But I didn?t need to wear earplugs and I felt zero fatigue, the ride was very quiet and peaceful.

What would your riding friends think if you pulled up on this bike for a cruise to Canmore? They?d be surprised to see me on a bike like this; typically my touring is done on bikes that can carry luggage and be thrown into the twisties as well.

NOTES FROM PIERRE LAMARCHE?S JOURNAL
— This is a big bike, a very big and imposing/intimidating machine at first glance.
— Very manageable at low speed, due to low centre of gravity, seat height, easy pull clutch, smooth throttle and no drive line lash.
— Found switchgear awkward.
— Exhaust note fairly muted, mellow up to 100 km/h or so then it is practically inaudible.
— Ground clearance adequate for a cruiser/tourer, not for sporting use, sidestand and floorboards touch early and hard.
— Seat is all-day comfy.
— Engine vibration is never intrusive even pleasant.

Harley-Davidson VRSCDX Night Rod Special
This bike continues the evolution of the V-Rod, introduced in 2001 and was the first liquid-cooled Harley-Davidson ever produced. The Night Rod Special is finished in all black ? frame, forks, swing arm, aluminum wheels, engine and exhaust. It?s all about the ?power cruiser? segment of the market place, and according to H-D literature the ??blacked-out components show a rebellious attitude.? 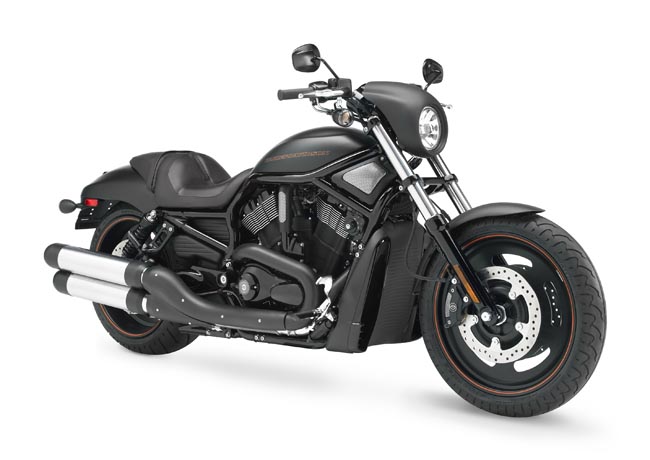 Who are you? Dean Edgar, 45, natural gas marketer with Enmax.

How long riding? About 20 years. I started out on a 1970s Suzuki GT750. Most of my riding is touring, down to Montana, to South Dakota, or just out for a weekend jaunt. I usually take a 10-day motorcycle trip at least once a year.

Did you like the look of the Night Rod Special? Yes, I did. I liked the blacked out parts, and the low, sleek, lines. It has a bit of a different stance.

Getting aboard; how did it feel? I was a little wobbly and uncomfortable. Moving around the parking lot I was feeling pretty amateurish, but I found it quite easy to ride after a bit of time on it.

Riding (handling, suspension, motor/transmission, brakes): I was out on the back roads near Caroline and Sundre, and was really carving in and out of the potholes. The bike responded very well, but there were a couple of bumps that really jarred me; I thought the suspension would have soaked them up a bit better.
The motor was quite enjoyable; it?s more about top end power. On the highway there was plenty of passing power, just twist the throttle and go, I didn?t have to downshift. The transmission was very smooth and efficient. I tried a couple of high speed stops and the brakes performed very well, a real good bite without having to grab a bunch of lever.

Stepping off and your gut reaction? I went from Calgary to Innisfail, up Highway 2, through Caroline and Sundre and back. The first 100 kilometres felt really good, but after 350 km I was beat. Without a windshield I was fighting the wind, and the riding position was a bit rough on my knees. But I loved the speed and the handling.

What would your riding friends think if you pulled up on this bike for a cruise to Canmore? I showed the bike to my mom, and she thought the bike looked good all in black. But when I rode away, afterward she said ?No, it?s not you.? Guess she didn?t think I suited the bike. And my friends know I?m not rich enough to have two bikes, so they?d wonder what was going on.

NOTES FROM DEAN EDGAR?S JOURNAL
— Mirrors did not vibrate but I couldn’t see past my arms to tell if anything was behind me.
— I bottomed out a few times on what I didn’t think were very big bumps; really felt it in my back.
— I liked the (seating) position early but after I went 350 km my knees were sore and my shoulder hurt from hanging on. I was really blocking the wind sitting in that position.
— Loved the speed and acceleration.
— Good top end and easy, smooth shifting.
— I think this bike to me would be a short trip mountain road bike only.
— People I talked to liked the looks but were suspect of the seating position.

Buell Lightning Long XB12Ss
In 1993, Harley-Davidson invested in Erik Buell?s company. Buell had been producing American-made sport motorcycles using H-D?s XL883 and 1200 Sportster engines. The first Lightning was introduced in 1996, the S1 model. Since then, the Lightning range has expanded, with four available models: XB12S, XB12Scg, XB12Ss and the CityX XB9SX. Harley-Davidson refers to the Lightning series as ?Short, flickable, agile, aggressive, and raucous. Lightning motorcycles are the original street hooligans.? 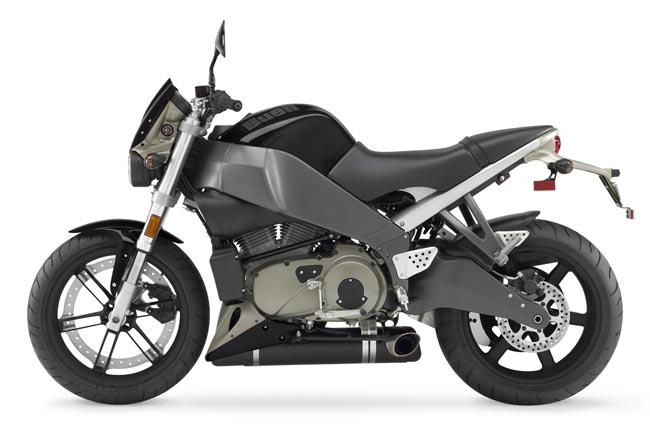 Who are you? Rachel Newrick, 36, geophysicist with Nexen. I?m the president of the Wild West Vixens, a ladies riding group, and I was an instructor with the Canada Safety Council motorcycle training program.

How long have you been riding? I started riding in 1996, aboard a Yamaha FZ250 at home in New Zealand. After I learned to ride I put 32,000 km on my bike in nine months. I enjoy mostly sport touring and dirt bike riding.

Did you like the look of the Buell Lightning Long XB12Ss? I really did. I like the ?naked? bikes, and appreciate seeing just an engine, seat and wheels ? just give me my bike, I don?t need all the really pretty stuff that if I crash I?m afraid I?ll break.

Getting aboard; how did it feel? It fit. They call it the Lightning Long, but I?ve never sat on a shorter bike. I?m 5?6?, and my first thought was this bike fits me perfectly. I don?t know how it would be for taller riders.

Riding (handling, suspension, motor/transmission, brakes): I spent a few minutes in the car park doing little doughnuts, just practicing turning and finding full lock; and some straight line braking. It?s easy on this bike to come to a full stop, balance the bike without taking your feet off the pegs, and then move off again. (Those footpegs turned out to be a bit of a problem, as Newrick?s booted foot slipped off three times over the course of her test.) The suspension seemed a bit hard; I really felt the bumps. When I first left the car park and let the clutch out in first and second gears I felt like I was on a rocket, it just felt like it wanted to fly. Out on the highway, the engine delivered its power smoothly, and never hiccupped. Even though there was plenty of torque, I always felt I had to change down a gear to pass. The brakes were really good, and I was impressed with the rim-mounted front brake disc.

Stepping off and your gut reaction? I rode the bike up to Canmore on the 1A Highway. After some time, I felt a bit scrunched up on the bike, but when I got off and took off my helmet I had a huge smile on my face. Anyone can find fault with any bike, but I really enjoyed riding it, it was fun. And, I know this is a backhanded compliment, but I was surprised I liked it as much as I did.

What would your riding friends think if you pulled up on this bike for a cruise to Canmore? I stopped by the Calgary Safety Council training site on the way out of town, and two of my friends who were there thought the Buell is cool ? I?m sure that?s what most of my friends would think.

NOTES FROM RACHEL NEWRICK?S JOURNAL
— As you slow to a stop, the vibration that occurs under 2000 rpm is there to remind you that you are on a Harley
— The Buell had plenty of stomp and smooth delivery of power to be fun on the 1A Highway.
— When passing at speed I felt a need to change down to safely make the pass; which was unexpected on a big bore bike.
— While zigging and zagging on the twisty and bumpy 1A through to Canmore each bump was felt through my entire body. Especially on this bike, I recommend a kidney belt when riding along a frost heaved potholed rollercoaster road.
— At one point during the ride we stopped at the side of the road and I was barely able to remove my helmet due to the huge grin stuck to my face – I had been riding on rails and it was really fun.
— The footpegs have to go!! The third time that my Alpine Star race style motorcycle boots slipped from the footpegs in a corner was three times too often. It seems that the demo bike had the originals replaced with some cheap aftermarket rubber pegs. Bring back the metal ones.