Alberta?s current licence plates, introduced in 1984, haven?t changed much. The design is, in fact, one of the oldest in North America.
That could be a problem as, according to Eoin Kenny, spokesman for Service Alberta, the province will run out of the three letter, three number combinations in 2009.
?That?s a comment on how many people have and own cars,? Kenny said. ?As a result of the prosperity here, we recognized we were going through plate numbers at an accelerated rate.?
Before running out, the province has decided this is a good time to review the design. Different background colour? Change the motto? Add a graphic or a theme? It would be pretty convenient to simply reverse the letter and number pattern of the current red on white plate ? putting the numbers before the letters.
To determine if Alberta needs a redesigned licence plate the province has decided to consult the public.
?If we were going to go through the process, we thought we?d put it out to Albertans,? Kenny said. 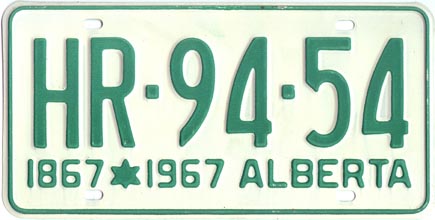 On Nov. 9 the province launched licenceplate.alberta.ca, a website featuring a survey asking questions about Alberta?s licence plate. Sample questions include: Should Alberta introduce a new licence plate design and Should the licence plate mainly provide information or should it convey a message about the province?
Alberta?s licence plates have changed over the years. From 1906 to 1911 vehicle owners had to display a province-assigned number somewhere on their vehicle, and it could simply be painted on the body. The first provincial plate was issued in 1912, and changes since then have included different sizes, colours, mottos, and numbers or number and letter combinations.
Often, plate colours and designs changed from year to year, said Joe Sallmen, licence plate collector and webmaster of canplates.com.
?But by the early 1970s most jurisdictions had introduced permanent or semi-permanent plates,? Sallmen said. ?It was a cost issue; with the number of vehicles getting higher and higher it was easier and less expensive to simply issue a decal to indicate the year.?

Alberta went permanent in 1975 with a black on yellow plate and the Wild Rose Country motto. That lasted until 1984 when the present plate was introduced with an image of a wild rose while the motto remained.
Now, Wild Rose Country could possibly be changed, as Kenny said, to Strong and Free, the provincial motto ? or something else entirely.
While speaking with Kenny he said to date they?ve had 28,366 responses on the website, with close to 400 or 500 coming in every day.
?Did I say 28,366? I meant 28,371. Since we?ve been talking, another five people have taken the survey,? Kenny said. ?It ticks over that quickly.
?I?ve been with the government since 2000, and I?ve never seen anything with this kind of response.?
Those are not repeat or inflated numbers as the survey can only be taken once from any given computer. 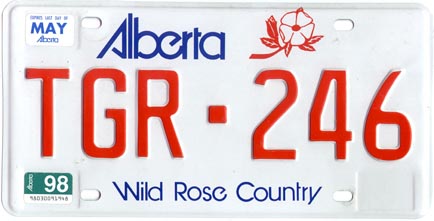 The open consultation goes until Jan. 31, and Kenny said it?s possible the province could have more than 40,000 responses by the time the site closes.
One of the more controversial questions on the survey is whether Alberta should bring back the front licence plate. In 1991 the province scrapped the front plate, and there are now some strong opinions on the subject.
?There are a couple of Facebook sites dedicated to the topic, and probably some others that I?m not aware of,? Kenny said.
What makes a plate a collectible item? Sallmen said there are two answers. The first are old plates in quality condition, and the second are some of the new graphic plates ? such as the new B.C. 2010 Winter Olympics plates.
Results of the on-line survey won?t be known for some months, and there will still have to be a decision made about what to do after the responses have been analyzed. ?We?re certainly going to take direction from the consultation,? Kenny said. ?(The topic) has captured the imaginations of Albertans.?