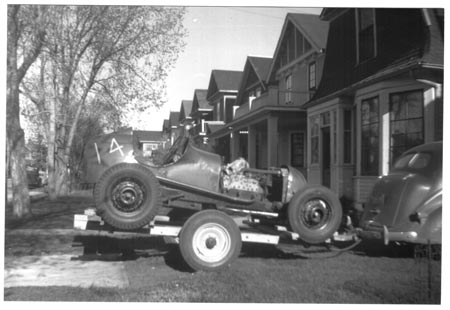 Calgary was a pretty simple little city in the early 1950s. If you wanted something done, you just pretty much went ahead and did it. Take, for example, the story of the Alberta Auto Racing Association.
The club formed in 1950 when a group of enthusiastic Calgary speedsters wanted to go racing.
“We wanted to get enough cars together to put on a show of performance,” says 81-year old Al Smith of Okotoks. “We couldn’t do that unless we had an association and everyone (who was building a car) was on the same page.”
The story really revolves around Smith. He was born in Calgary and raised on farms in surrounding communities such as Balzac, Sheppard and Priddis. Discharged from the Navy in 1946 Smith went to work at Acklands in Calgary, but knew he wanted to do something else. He put in applications with the fire, transit and police departments.
“I didn’t really ever think I’d end up as a police officer, but I did, if only for a brief amount of time,” Smith says.
He spent a year walking the beat, and notes, “In the winter time you’d get cold, and you’d find places where you could get in and warm up and then head back out.”
And one of those places happened to be Atlas Service, an Esso gas station on the southwest corner of 17th Ave. and 5th St. S.W. During the respite from winter’s cold, Smith spent time chatting with one of the owners of Atlas Service. He learned that the shareholder wanted to sell his half of the business.
Smith, 23 at the time, says he only had about $200 — but his mother in law loaned him enough funds to buy into Atlas Service. So he quit the police force to work in his garage, doing brake jobs, changing tires and water pumps, installing mufflers and performing tune-ups. “We could do a brake re-line and change a set of tires so fast it would make your head spin — it was a lot easier to do back then on those old cars,” Smith says.
It’s hard to believe now in today’s fast paced world, but Smith tells a story about how in 1950 a number of Calgary gas stations were talking about going on extended hours — basically 24 hour service. Not every station was allowed to operate extended hours; only a select location within certain quadrants of the city could be open. Atlas Service became a 24-hour outlet, and Smith soon became sole proprietor of the station.
He says that’s about when he met Frank Taylor, a local mechanic with a passion for auto racing.
“(Taylor) had raced Ford Model Ts, and we both loved racing so we had something in common,” Smith recalls. “I told him I needed a mechanic to work at Atlas Service, and Frank came to work for me.”
Taylor told Smith about the makings of his racecar — he had a chassis and wheels. Most importantly, he had a brand new flathead Ford V-8 engine that Universal Sales and Service (now Universal Ford Lincoln) had donated to his cause.
And it was around the same time talk about forming a racing association started. The inaugural meeting of the Alberta Auto Racing Association was held at the Palliser Hotel, with about a dozen enthusiasts laying down the specifications for their ‘dirt track’ racers.
“I had Taylor drag the pieces of the racer over to Atlas Service, and every evening we were working on that car,” Smith says. The pair worked hard, welding, cutting and fabricating, making the motor and transmission fit and shortening a drive shaft to meet up with the rear differential. They also had to make their own racecar body, including the rear tail, cockpit and hood.
“There was a dump out behind Tom Campbell’s Hill (just north of the Zoo), and (Taylor) and I went out two or three Sunday’s in a row looking for scrap metal to build the body for our car. All of the metal for that car body came from the dump, and we hand formed and welded together the pieces that we found.” 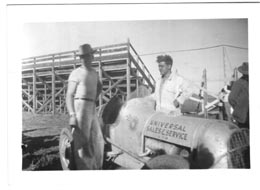 With the formation of the AARA the enthusiastic racers proved their mettle on tracks in Calgary, Nanton, Three Hills, Red Deer and Lacombe to name a few. Other notable names in the racing group include Jim Ward, Frank Janett (later known as ‘Leadfoot’ Janett), George LeMay, and Eric and Roper Clark of Clark’s Auto Parts.
There wasn’t ever any prize money — it was simply for the thrill of the ride. In Smith’s case, Taylor drove while he formed part of the pit crew, responsible for checking wheel nuts, coolant, oil, and ensuring there were no fluid leaks. Their car was successful, and they won a few races.
“We were just imagining ourselves in the Indianapolis 500; it was a far cry from that but it sure was fun,” Smith says.
Taylor moved from Calgary in 1953, and Smith went on to operate a number of gas stations before becoming a UFA bulk fuel distributor. While he didn’t lose his interest in automobile racing he stopped participating himself.
Smith says, “It was all about the excitement getting ready for the race, the excitement of the race, and then the journey to the nearest pub afterwards to rehash the race.” 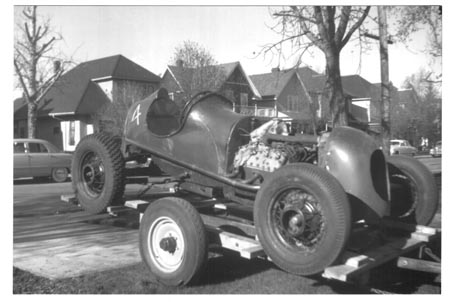