Volkswagen named their new convertible the Eos.
Heck of a good name, considering Eos is the Greek goddess of the dawn, responsible for bringing the sun to each new day.
But the sun didn?t shine much for Stacey Savage, our Calgary test driver who was behind the wheel of the 2007 VW Eos for a week. In fact, she only got the top down for a couple of trips ? and one of those was down Deerfoot Trail ? a noisy, dusty and busy drive at the best of times.
?I managed to drive down Deerfoot with the top down,? Savage, 35, says. ?And it wasn’t too bad. With the windows up it’s not windy at all.?
Savage is an operations manager for Shaw Communications, who was born and raised in Calgary. Her current vehicle is a 1996 Acura Integra equipped with a manual transmission, and she also rides a 1999 Suzuki 1400 c.c. Intruder, a cruiser-style motorcycle. Her first car was a 1980 Dodge Colt, and then she drove a 1986 Buick Century sedan. She bought her Acura in 1999. Savage spends most of her time behind the wheel commuting from her northwest home to her northeast office. When she?s not commuting, she?s driving to a park to play ball or to golf.
Savage took up motorcycling when she was 29. ?I kept seeing them zip down the road, and I figured I should give it a go.?
She likes the out-in-the-elements feel of riding the bike, and wanted to test a convertible to compare the experiences. However, Savage expects a large degree of utility and functionality from her vehicle, and the Eos didn?t quite meet her expectations. 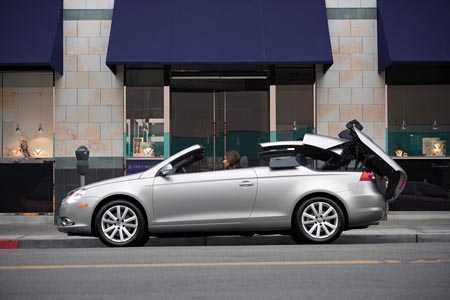 ?I don?t think you could carry any kind of larger object, like a new TV set from Costco, or a chair or side table,? Savage says. ?At least, I wouldn?t want to damage the interior by sitting something in the back seat.?
One gets the feeling she?s pretty comfortable with her Acura hatchback; she reports moving a barbeque and other large items in her car.
That said, though, she did end up liking the Eos.
Introduced late in 2006 as a 2007 model, Volkswagen?s Eos is not a cut-up and remade Jetta, Rabbit or GTI; it is a standalone design and doesn?t look at all like any other VW offerings. It does however share some underpinning components, including rear suspension from the Passat and the 2.0-litre turbocharged engine found in the GTI.
The Eos is a hardtop convertible coupe, and the retractable top was designed by OASYS (Open Air SYStems). Not only is the top retractable, but it also features a large sliding glass panel sunroof. At the push of a button the five-piece top articulates in a very complicated manner and stows away in the trunk in just a hair over 25 seconds.
?The roof line is what really characterizes the car,? Savage says of the exterior appearance of the Eos. ?And to see the convertible top go up or down; it?s really nifty, there are so many different moves it makes.
?When I was showing off the car (and how the top works) people who were walking by would just stop and watch the demonstration.?
While she might not have been able to enjoy too much top-down- wind-in-her hair-driving Savage did experience the performance potential of the Eos.
?It had a lot of get up and go,? she says. ?It was a speedy car.? The turbocharged four-cylinder makes 200 horsepower and 207 lb.-ft. of torque.
A good long highway excursion wasn?t in her cards, but she managed to accumulate just over 500 kilometres running around the city. Savage?s Eos was equipped with the optional six-speed Tiptronic automatic transmission. She experimented with the Tiptronic feature, but in the end preferred to let the gearbox shift for itself. A six-speed manual is standard fare in the Eos. 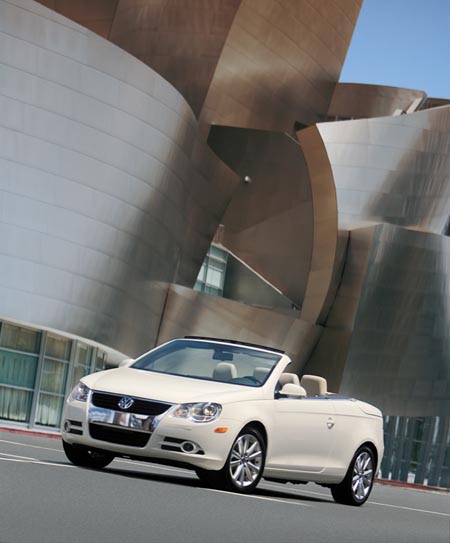 Savage?s Eos sported the $3,835 Sport Leather Package, and it was loaded with features that met with her approval. The leather seating surfaces were heated, and the 12-way power adjustable driver?s seat was a dream, she says.
?The seat moved up, forward, down, back, tilt, lumbar ? I really liked the seat.?
The Sport package also included dual zone automatic climate control, rain-sensing wipers, premium stereo with eight speakers, and a multi-function trip computer and compass.
Savage liked the way the Eos handled. ?Going around corners it really hugged the road — very little body roll — and it just seemed very solid and well-planted,? she says. ?The car?s suspension was great, it was like driving on a cloud or like you?re on brand new pavement; the suspension really took the bumps out of the road.?
The car also had a very tight turning radius, and Savage says the Eos had great parking lot manners and was a cinch to parallel park.
Would Savage purchase an Eos?
?In a word, no. I need one vehicle that will do everything for me, and I just felt the Eos had limited space.
?I mean, you can carry a couple of bags in the trunk when the top is down, but I just didn?t see it having a lot of trunk room for a lot of stuff.?
So, just who would best suit the Eos?
?I think it would be an excellent second family vehicle, where there?s an option to carry other stuff in a van or a truck if need be. And the Eos would be good for a couple of small kids to sit in the back seat.
?I guess if I pictured myself living with my boyfriend, or in a family situation, the Eos would be kick ass.?
As she was returning the Eos, Savage says the VW GTI caught her eye. ?Now, that might work better for me.?

NOTES FROM STACEY SAVAGE?S DRIVING JOURNAL
–Feels awkward to be driving an automatic. Tried using the manual/auto stick, but don’t really see the use of the manual so kept it on automatic.
–Silver? Doesn’t do the car justice. A convertible needs to be a bright colour.
–Awesome that there is still a bit of trunk room when you have the top down.
–Has lots of giddyup and corners really well.
–Washed the car today to keep it pretty. Unfortunately, the window seal let water get into the car and it dripped on the seat. Even when you open the car door and close it again water keeps dripping because it’s stuck in the seal. Something they need to work on.
–Played with the convertible mechanism — a definite eye catcher. I don’t mind the look of it when the top is up; it still looks more sporty than the sedan look I expected. Looks hot with the top down however!
–Am really enjoying the SMOOTH and QUIET ride, it’s really nice.
–This car is not good with the rain. (Is it just this car?) Once rain gets into the track when you open the door, it gets trapped and drips on you.
–No issues with the sunroof — and it’s awesome to have the sunroof/convertible combination. 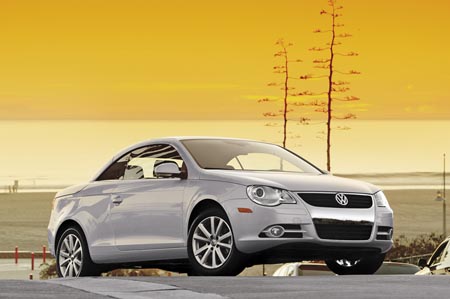 IN IT FOR THE LONG HAUL
Denise Blakely is a 46-year old Calgary driver. She bought a 2007 VW Eos from Northland VW, and in just two weeks of driving has accumulated 1,271 kilometres. Blakely is a freelance photographer, and has been shooting numerous sports events and professional athletes ? most recently quarterback Henry Burris of the Calgary Stampeders. She commutes around town and is frequently on the highway going to her Canmore summer home. As a photographer Blakely regularly carries numerous video and camera bags.

Q: Why the VW Eos?
A: I saw an article in a magazine about the Eos, and it caught my eye. My husband and I talked about it, and decided that with the kids all grown up ? I don?t have to worry about baby seats at the moment ? it would be a great car for me. This is my first convertible, but the selling point for me was that it?s a hard top. With our winters, a soft top doesn?t seem sensible. But really, it?s a sports car, it?s red, and it?s a fun car to drive. And I do plan on driving it year round.

Q: Top up or top down?
A: Oh, I definitely prefer to drive it with the top down. If the top?s up, then the sunroof is open. And there?s plenty of room in the Eos. Last weekend I had four people in the car and two camera bags, an overnight bag and two backpacks in the boot, and that was with the top down. There is a huge amount of trunk space there.

Q: How long do you plan on keeping your Eos?
A: I plan to keep it until it falls apart, so I guess forever.