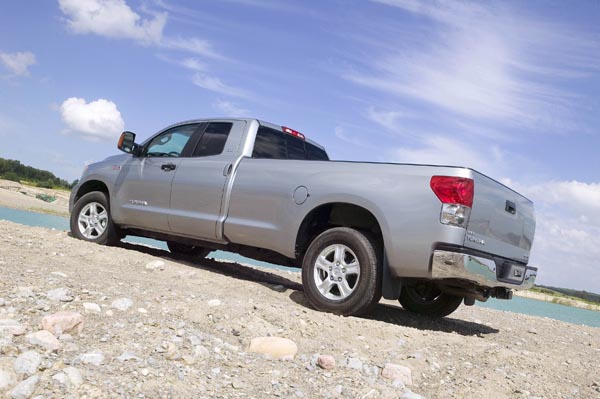 To say Kathryn Christie knows her way around trucks would be an understatement. This 45-year old Calgary driver was born in Unity, Sask., and grew up on a farm. She says she was behind the wheel of a 1956 GMC ? ton at eight years old.
?I?d drive that truck around the fields,? Christie says. ?And it was a three-on-the tree standard shift. I was driving on dirt roads when I was 12, because we were always moving machinery and equipment and I?d pitch in and drive a 3-ton truck with a grain auger and a roller; sometimes I?d drive the combine.?
Even with the amount of farmyard driving Christie says she performed, she counted down the days to her 16th birthday — so she could legally drive.
?I took my driver training through a course in high school,? Christie says, and laughs when she adds: ?We had to drive to North Battleford so we could actually learn about street lights.?
Christie, a landscape designer, now operates a local landscaping company and is still driving trucks on a daily basis. She was a perfect candidate to test the 2007 Toyota 4X4 Tundra Limited with a double cab and standard box.
The Tundra is all new for 2007 and completely redesigned, gaining bulk in just about every direction. To put their new Tundra on par with trucks from other manufacturers, Toyota says they?ve created a new chassis that extends the wheelbase and increases overall length 254 mm over the 2006 Tundra. The ?07 Tundra is also taller and wider, and comes in three cab configurations, regular, double, and Crewmax.
?The Tundra was much larger than I?d expected,? Christie says. ?I knew it wouldn?t be small like a Ford Ranger, but I didn?t expect it to be as big as my (2002 Ford) F-150.?
When Christie started the landscaping company she purchased an operating business, and that outfit came with several Ford trucks — three F-350 dually 1-tons, to be exact. The company also has a Mazda B2000 pickup.
?We?ve been happy with the Fords, and they seem to work well,? she says.
This new Tundra truck is pretty important to Toyota. It is designed, engineered and manufactured in North America and the automaker is hoping the vehicle will ?set a new benchmark in the full-size truck segment,? says Toyota Canada Inc. managing director Tony Wearing.
Engines are available in two sizes, a 4.7-litre and a new 5.7-L i-Force V8 coupled to a six-speed automatic transmission. Christie?s Tundra Limited was equipped with the 5.7-L engine.
?After we picked up the truck we pulled out onto the highway and our heads flung back,? Christie says. ?The V8 really had some punch, or, the pickup had some pick up, I?d say.?
After driving the truck for a few days, Christie remained impressed with the powerplant, and said she felt the Tundra would have the ability to haul or tow just about anything. She also awarded kudos for the Tundra?s smooth ride, and thought the steering was taut. She also couldn?t believe how tight the truck?s turning radius was, and found the vehicle easy to park thanks in part to its reverse view camera. The LCD reverse camera screen is part of the DVD based navigation system, mounted centrally in the truck?s dashboard. 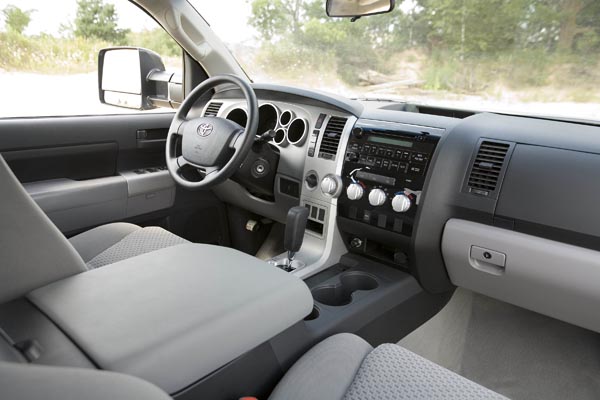 Of the double cab, Christie says; ?The truck had a very spacious feel inside. And the seat felt like something you?d find in a luxury car, the driver?s bucket just felt like it coddled me, it was very comfortable.? The Tundra Limited is equipped with leather seating surfaces, and the driver?s seat features 10-way power adjustment, power lumbar support and it is heated. The passenger seat offers all of the same features, but with four-way power adjustment.
?The leather seats were great, and there was an overall impression of quality. It felt like a very high-end vehicle,? Christie says.
Christie spends most of her time behind the wheel picking up plants, construction materials or visiting clients, and figures that?s 80 per cent of her driving. The other 20 per cent is spent driving 10-year old daughter Rowan to school, guitar or dance lessons, or going grocery shopping.
The family?s other driver is a 2000 Volkswagen Passat wagon; but she is most often driving the Ford F-150 pickup for her landscaping business.
During the weeklong test Christie was working on a patio/hot tub project in Discovery Ridge, and she hauled lumber, paving stones, bricks, plants, power tools and a wheelbarrow. She was impressed with the truck bed liner, and says the truck box swallowed everything she put in it. 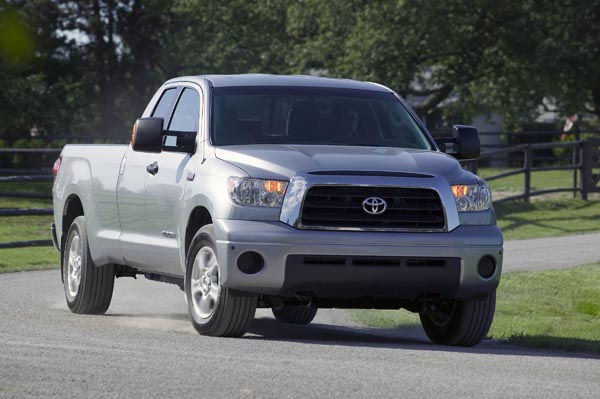 ?Trucks (and their boxes) are so much higher now, for me to get anything over the side I had to be on the curb, and I?m not a short person at 5?8?,? Christie explains. ?That?s the downside of these new, taller trucks, that?s for sure.?
But she was impressed with the Tundra?s tailgate, which she figures might be the best in the industry.
?You could open it and it would stop, and then it would almost glide down,? she says. ?And it was very light to close, you could lift it with a finger.?
Christie thinks just about anybody who uses a truck on a daily basis would be a good fit for the Toyota Tundra. And, she adds, ?I wouldn?t turn it down; if I had the scratch to buy it, it?s not unlikely that it would be sitting in front of my house.?

IN IT FOR THE LONG HAUL
Calgary stockbroker Paul Saks, 53, is an avid outdoorsman. There aren?t very many weekends when he?s not out somewhere in the country, either hunting or fishing. Over the last 12 years Saks has owned nine Toyota 4Runners. He liked the 4Runner for several reasons, including its ease of parking, off-road capability, and overall performance. He needed more room, however, and had been looking at the Toyota Tundra for more than five years. Until the 2007 remake of the Tundra, though, he thought it was too small.

Q: Why the Toyota Tundra?
A: When I saw the new Tundra I couldn?t believe the room that was available. I kept looking at the Tundra, and always said I?d get one if it had just a bit more room. So when Toyota introduced the new Tundra I put my name on the waiting list; I think I waited for just over six months. I?m pretty sure I got one of the first ones in Calgary. Mine?s loaded, and I got the Crewmax cab and the short box.

Q: Was it worth the wait?
A: I got the truck in late March, and have put just over 8,000 km on it. So far, the handling is just amazing; it?s tighter in the corners than some of my 4Runners. The power of the 5.7-L engine is incredible. And because it?s rated to tow so much weight, I knew it would have incredible brakes; and it does. I also really like the sonar parking assist system.

Q: Any regrets?
A: No, no regrets. I?m going to fit a topper on the box so I can put my three dogs in the back, and there?ll still be tons of room for five people in the cab. My 4Runners were really good, but I needed a little bit more room, and I have it now. 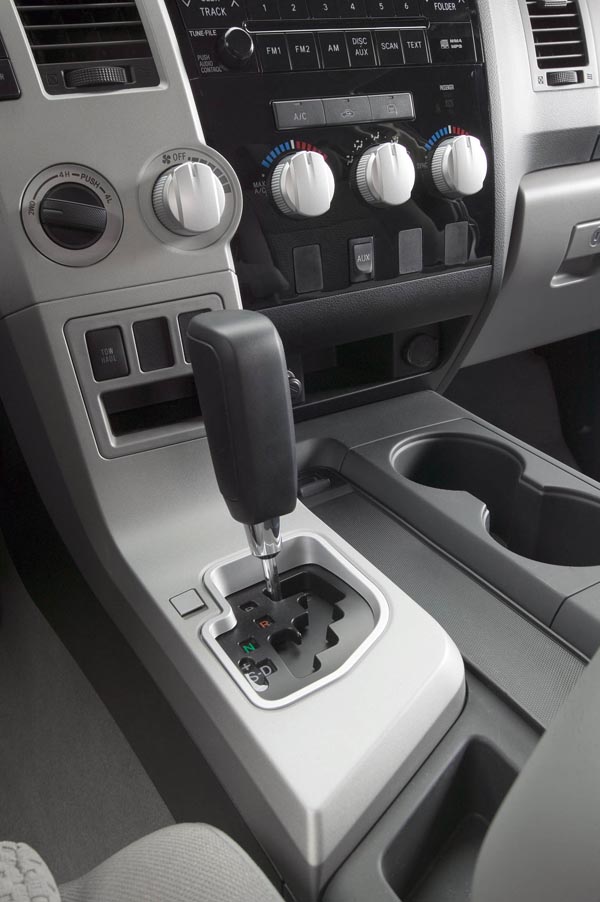