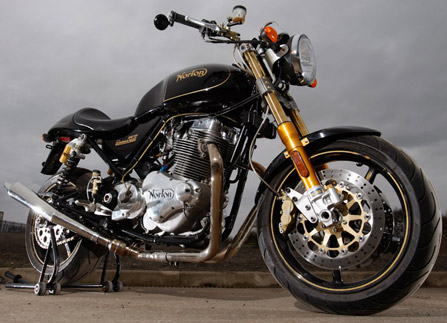 It’s been well over 35 years since a new Norton motorcycle rolled out of a dealership and onto the city’s streets.

But that’s about to change. Norton, a very recognizable name from the annals of motorcycling, has been resurrected. This past weekend the British manufacturer had its 961 Commando Sport at the Calgary Motorcycle Show, where it was just one of many new models on display.

Just under 30,000 visitors attended this event at the BMO Centre at Stampede Park, and Calgary Motorcycle Show manager Laurie Paetz said: “Recreational products are such a niche market. To be able to attract that many people, and especially on a weekend when there was a blizzard, shows the industry continues to appeal to a large number of Albertans, and especially Calgarians.”

Every major motorcycle and ATV maker was represented, and show goers I spoke with seemed interested in a wide variety of products, from electric machines by Zero Motorcycles to touring bikes such as the Gold Wing from Honda – and just about everything in between.

However, all weekend there was a steady crowd around the Norton, proving Calgary retailers, brothers Jim and Tim Wild, of Wild and Wild, Inc., just might be onto something.

“There’s so much passion for the Norton brand,” Jim Wild said. “There are still guys out there sporting Norton tattoos.”

Calgary motorcycle enthusiast Bobby Baum currently rides a 2008 Victory Vision touring machine. He’s passionate about all motorcycles, and is at work restoring a vintage Royal Enfield. He was impressed with what the new Norton 961 Commando Sport had to offer.

“It’s one of the finest new works of rolling art at the show,” Baum said. “(I think) Norton has a hit on their hands. This bike is beautiful from all angles.”

Norton joins three other ‘premium niche’ brands retailed by the Wild brothers. Royal Enfield, Indian and Ducati are also sold from their 35,000 sq. ft. facility, which, for lack of a better name right now, is referred to as the Super Bike Centre. A new name will likely be announced when the northeast Calgary Pegasus Road location officially opens this spring.

This new facility on Pegasus Road makes the area just south of the airport something of a motorcycle destination. The Wild family’s Calgary Harley-Davidson — itself a standalone 35,000 sq. ft. facility — has been on this street for some 15 years.

The first Norton to leave the Wild’s dealership won’t be delivered until this spring, when the brand officially launches in Canada.

“These are not high-volume brands,” Wild said of Norton and Ducati, and added, “But there’s keen interest in them.”

Instead, Wild said Norton and Ducati are motorcycles that riders aspire to own, and are ‘move-up’ brands.

The story of how Norton got to where it is today is one of interest. Founded in 1898 by James Lansdowne Norton, or Pa, as he was commonly known, Norton was one of the most race-winning motorcycle factories in the world. The firm took many Isle of Man TT titles, and while they did produce some bread and butter machines Norton motorcycles could have been considered   thoroughbreds when compared to the other well-known British makers – including B.S.A. and Triumph.

Arguably it was the Norton Commando, with its 750cc and later 850cc parallel twin engine produced from 1967 to 1975 that was the most famous model.

Like many other British motorcycle makers, however, Norton hit a rough patch in the early 1970s from which it never recovered.  After going bankrupt, there were more than a few attempts to bring the Norton name back to market. There was some racing success with a rotary-engined Commando model, including winning the 1992 Isle of Man TT, but the bike didn’t receive commercial acclaim.

It wasn’t until the late 1990s when an American, Kenny Dreer of Oregon, began producing at a very limited rate a redesigned Norton Commando. The bike featured many technological upgrades, but the model held true to the parallel twin version of the original Commando.

He had some financial backing, and was going to begin larger-scale production. His finances, however, fell through and in 2006 Dreer had to suspend the dream of full-scale production of his own Norton Commando.

That’s when Stuart Garner, a UK-based businessman, stepped in. He formed Norton Motorcycles (UK), and although the company got a few of the Dreer Commandos in the deal, his design team completely re-engineered the model. In April 2010 limited production began of three Commandos – the 961 SE (an edition of 200, already sold out), a Café Racer and a Sport model.

The Norton features a tubular steel frame with integral oil tank and a fuel-injected 961cc parallel twin engine. Many of the component pieces are sourced from UK suppliers, but the Norton is equipped with some of the best globally-available components including Ohlins suspension and Brembo brakes.