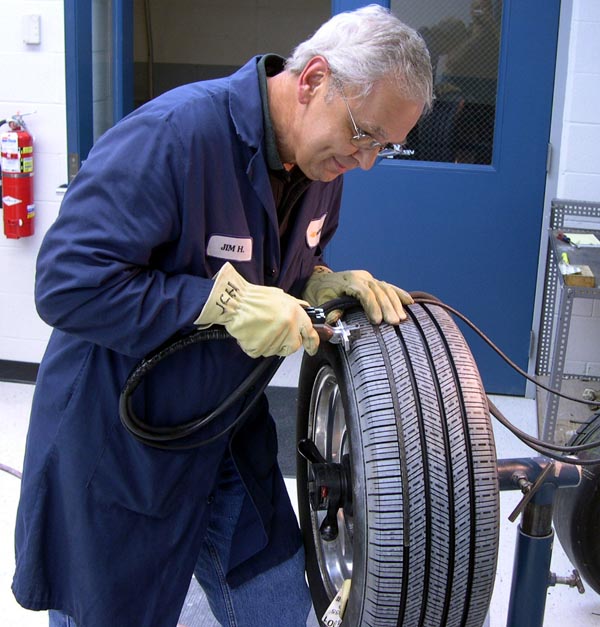 Carving wood or stone, that’s not too unusual.
But carving rubber — now that’s different.
Meet Jim Horvath of Uniontown, Ohio. He’s a man with an interesting job. As a senior associate engineer with Hankook Tire America Corp., Horvath works at Hankook Tire’s Akron Technical Center (ATC). His informal job title, though, is that of tire carver.
“Some people have referred to this (tire carving) as an art form,” Horvath says. ‘But that’s stretching it — I’m more a model maker.”
Horvath has worked in the tire industry for close to 36 years, and he’s been involved with tire carving since its infancy. The ‘trade’ was born in the mid-1970s, and the idea behind it was to take a flat, two-dimensional drawing and turn it into a tangible, three-dimensional product.
To visualize what Horvath does, go and take a look at the tread pattern on a tire on your vehicle. Notice all the different wedges, angles and grooves in that tread? If it is a Hankook tire, chances are good Horvath hand carved each and every one of those nooks and crannies in a prototype tire before a formal tire mold was ever made.
His canvas is a blank tire, similar to a racing slick. Using a tool he designed and had custom made — there’s not another like it — he hand cuts the tread pattern in a tire. The tool is similar to a soldering gun, but features jaws in which he can mount a number of different blades. A microswitch controls when the tool is turned on and off, and a rheostat sets the temperature at the blade.
For Horvath, the trick in tire carving is using just the right amount of heat at the appropriate time for a smooth and consistent cut.
“Setting the electrical current (heat) too low makes it difficult to push the blade through the rubber, and setting it too high could cause the rubber to burn or melt– and then you’re also changing the property of the rubber,” Horvath explains. “Rubber is amazing stuff, and depending on the different compounds it can be easy or hard to cut. If there’s silica in the compound it wears out the blades, a softer tire can be gummy.”
A tire designer will often create five or six tire sketches, and then an engineer will pick one or two of those to go to the tire carving stage.
“We can hand carve any one of those designs without ever having to make a mold,” Horvath says. “If an engineer wants, we can cut four tires and put them on a vehicle and test them.”
Depending on the intricacy, or how ‘lacey’ the design is, Horvath can carve a tire in as little as four hours. An intricate pattern might take him three or four days.
As part of the Hankook engineering team Horvath often travels to sites where real world testing of their prototype tires is taking place. Using his tire carving skills and his custom-made tool he can actually tweak the tread design for further testing. He says it’s often a noise or traction issue that needs to be corrected.
Horvath figures every major tire manufacturer has a tire carver — but there are no classes one can attend to learn the trade. And, there’s no tire carver association or big conventions in Las Vegas. All training is learned on the job.
Horvath got his start in the tire industry working in the art department at General Tire as a draftsman. He spent seven years drawing, and then began tire carving, something he’s been doing for nearly 30 years.
“The years spent drafting helped me to read a drawing and understand the tire requirements, and I’ll have a good idea what the finished tire is supposed to look like,” Horvath says.
Tire carving is part art and part science. But Horvath’s hobby — woodcarving — is pure art. When asked what the most difficult thing he’s ever carved might be, surprisingly the answer is not a tire.
“I once carved a horse in black walnut for a young girl, and I sweat more over that than anything else I’ve done in my life,” Horvath says. “Accurate detail is what I’m after.” 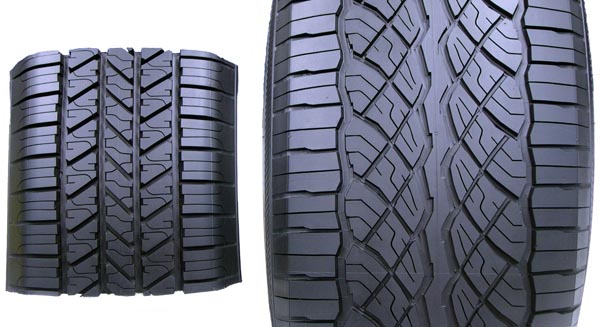