In preparation for a Cycle Canada story about The Ride, I drafted a number of questions for BikeEXIF curator Chris Hunter. He responded. However, I wasn’t able to use more than a couple of lines from the email interview. Because his comments prove insightful, I’ve posted them here. Thanks again Chris! 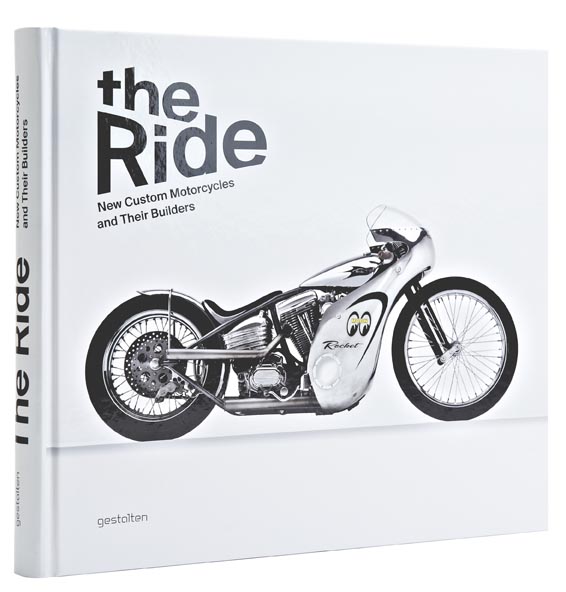 The Ride, published by Gestalten. Image courtesy of the publisher. Book was edited by Chris Hunter and Robert Klanten. The book is worth the price of admission.

Q. In your introduction to The Ride, you give a great deal of credit to Deus for reigniting a passion for bare bones, stripped down motorcycling – and their influence goes back to Japan. Was Japan always a hotbed for customizing, or how did they become responsible for the ‘new’ customizing ethos?

A. Japan is an isolated nation—isolated by language and geography. It’s also an insular society that usually frowns on self-promotion. Custom cars and bikes have been huge in Japan for decades, but their own culture has only recently reached the mainstream in the West. Today, sites like EXIF help to spread the word. I used to run quite a lot of Japanese ‘Brat style’ bikes, named after one of the leading Japanese builders. But Deus got there first, before EXIF existed. Deus’ founder Dare Jennings took a huge leap of faith and transplanted Japanese bike culture into the West, via Australia.

Q. My dad always used to tell me that by customizing something, you were taking away function that had been especially engineered into the device – bicycle, motorcycle, car or truck. In the world of custom bikes, is form more important than function?

A. I think the pendulum swings more towards form than function, yes. But in most cases, that’s okay. An emphasis on function can often be misdirected and overcomplicated. Most people use bikes for short trips around town, and a sporty SR400 café racer is better for that than a BMW R1200 GS or Honda Gold Wing.

I reckon the emphasis on function has been responsible for the famous decline of new motorcycle sales in Europe and North America. Who needs a bike that can traverse Africa, or do 100 kph in first gear? It gives road testers something to write about, but it’s irrelevant to the average person. The Japanese big four lost sight of this some time in the 1990s: They idolized their engineers instead of their product planners.

An analogy: I have an expensive Leatherman multi-tool that’s a staggering feat of engineering and packaging. But I love (and use) my classic French Opinel pocketknife far more. It’s a simple, good-looking design that has remained unchanged for decades. The Opinel does less, but is more useful. That’s the lesson for today’s motorcycle marketers.

Q. Some builders from the past, including Von Dutch, are today celebrated as artists by those who aren’t necessarily interested in motorcycles. Are there any current customizers (Shinya Kimura, Chicara Nagata) building machines that the non-motorcycling public would consider art?

A. I would put Shinya, El Solitario and Christopher Flechtner of Speed Shop Design in the ‘art’ category, building bikes that laser the eyeballs. Kurt Walter of Icon Motosport also builds some incredibly creative machines. But even run-of-the-mill new wave customs tend to attract the eye of the general public. I don’t know about Canada, but in London, Sydney and Paris, I’ve seen good retro-style customs parked on the side of the street getting waaaay more attention than any $25,000 sportbike.

Q. You credit builders such as Deus, Wrenchmonkees and Café Racer Dreams for helping restore the soul to motorcycling. I would argue Bike EXIF has played an even larger role. In spreading the gospel, the site has helped make motorcycling cool again. Any idea how many people who before being introduced to EXIF were not motorcyclists? Do you ever hear any stories about folks buying bikes because they tuned into EXIF?

A. Quite a few of our readers don’t have a bike—yet. They visit the site because they like the bikes we show—they’re sharp and funky and soulful, which most showroom bikes are not. They like the stories about the builds and the culture we portray. And they’ve realized that not all bikers are asshats wearing Maltese crosses, or priapic teenagers on Gixxers, or burly blokes in leather chaps.

In that way, EXIF inspires a lot of people to get onto two wheels. I was working with a film director at the Wheels & Waves festival in Biarritz in June, shooting bikes that would appear in the book. By the end of the weekend he was lusting after a bike himself. He’s now going to learn to ride, because he’s finally discovered a style of motorcycle that flips his switch. There are hundreds more like him.

Q. What was your original intention with EXIF? (When it started, was there more emphasis on the photos and the cameras used to shoot them?) Over the four years it’s been online, have your expectations for the site been met? Has the site changed since its inception? What is the site’s largest demographic? Are they older or younger, male or female?

A. The images were a key point. In late 2008, most motorcycle sites looked messy, with bad photography and design. So I decided to focus on great images of great bikes. Hence the name Bike EXIF—‘EXIF’ is an acronym for the file format used by digital cameras. But the site is no longer just pretty pictures, it embodies an exciting new culture.

Our core readership is 25-44. It drops off quite a bit on either side of that. Nearly half the readers are in North America, with the UK, Australia, and western European countries being strong too. Our readership is younger than the wider motorcycling public, and probably more ‘urban’ too. A term that used to be bandied around in the comments is ‘hipster’…

Q. What has surprised you the most about Bike EXIF?

A. How big it has become, with around two million page views a month. And how time-consuming it is. I’ve tried to keep the site looking clean and simple, but there’s a lot going on behind the scenes. Dealing with the tech stuff, the constant code development, schedules, invoicing, and feeding the social media monster. And emails … I get around 350 emails a day on average.

Q. Do you feel EXIF drives some trends, or simply records their progression?

A. That’s really hard to say. There are certain styles of bikes that are always popular: café or Brat (Japanese-style) bikes with flat seats, cool paint and no fenders. Those are usually the big hits in terms of page views. On the other hand, I try to push things with bikes that I know won’t have such instant or widespread appeal, but show original thinking or a new style. I think you have to mix it up. Right now we’re seeing tracker-style bikes becoming more popular, with off-road or scrambler influences, and that’s something I was starting to push a long time ago. But really, it starts with the builders. I don’t make this stuff up—they do.

Q. How often are you surprised in either extreme with the reaction a machine garners from your viewers? Any examples of motorcycles that got the opposite reaction you thought they would (and are any of them in The Ride)?

A. I take the reactions on the site with a big pinch of salt. For every intelligent, reasoned commenter with something interesting to add, there’s a narrow-minded person with an axe to grind. With some builders, you have no idea which way the wind is going to blow—El Solitario is an obvious example. The first reaction often sets the tone: if the first person who leaves a comment is positive, it bodes well for the rest, and vice versa.

Some of the bikes in the book have had mixed reactions on the site, but not from a traffic point of view—they’re all hits in terms of audience numbers. The silent majority, if you like!

Q. Do people spend too much time in front of their devices – or has/does the Internet and social media help fuel the passion for custom motorcycle creativity?

A. I’m a Luddite at heart. I drive a 1970 Land Rover Series IIa and listen to music via a valve amp. So I’d say yes, we all spend too much time looking at screens. We should really be out there, riding. But on the other hand, the internet spreads the message incredibly fast. It provides inspiration and information, not just through sites like EXIF, but also forums where builders can get help from others. So I’m disinclined to knock the internet too much. People have always thrown their hands up in horror when new forms of communication have become popular, from ‘Penny Dreadful’ novels to television and now the web.

Q. If you could see five years down the road what do think you would see for custom motorcycles?

A. I’ve no idea! Personally, I’d be happy to see the back of pipewrapped exhausts.

My biggest concern is encroaching legislation that affects all bikes. Motorcycling doesn’t have many friends in high places, and most politicians merely tolerate motorcycles. We live in an increasingly sanitised and regulated world and bikes are an easy target. In some countries, notably Germany in Europe and Taiwan in Asia, it is difficult to register a modified bike for the road. Their compliance systems are draconian. That sort of attitude makes it harder to customize a bike, and it worries me—will legislation stifle the freedom and creativity of builders? 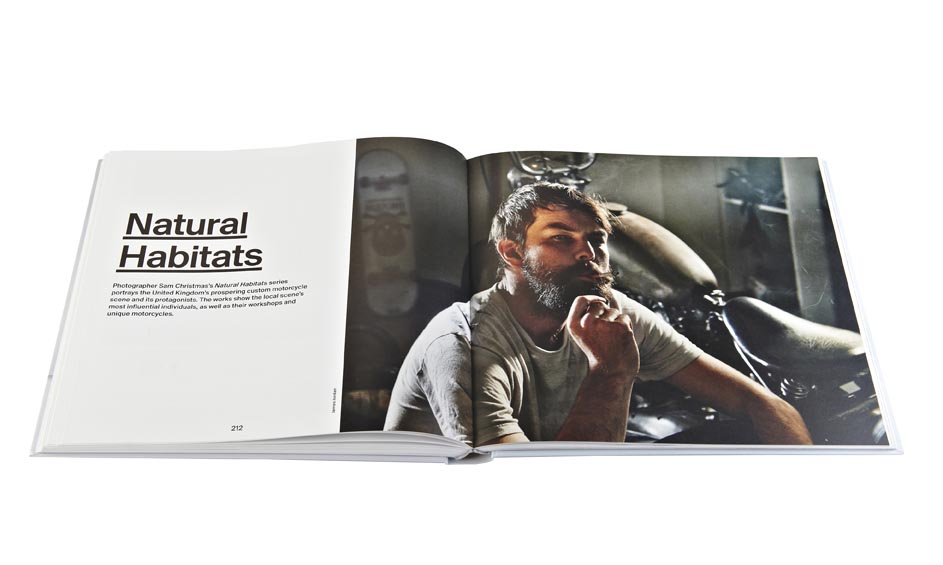 The Ride, published by Gestalten. Image courtesy of the publisher.