Spring Thaw is Calgary’s first car show of the season, and this story first ran in the Calgary Herald Driving section on April 27 to help promote the event. Terry Murphy’s car was featured, and what a ride it is. Photos by Christina Ryan.

Car crazy Calgarians are revving up.

This Sunday, the 27th edition of Spring Thaw ushers in car cruising season.

“Our show has become one of the rites of spring,” says John Moore. “It’s generally the first car show of the season, and it’s all about getting the cars out, gassed and oiled up, and cruising.”

The Nifty Fifty’s Ford Club of Calgary hosts Spring Thaw, and Moore says since the show’s inception in 1986, the intention has been to bring many of the city’s different car clubs together in one location.

Both clubs and individuals embraced the concept, flocking to Spring Thaw as it has moved to various locations around Calgary. Currently, the show seems to have found a semi-permanent home at Deerfoot Mall.

Capacity in the northeast parking lot is 500 cars, and Moore says if the weather is good, they often end up having to turn away vehicles.

Moore, in his second year as president of the Nifty Fifty’s Ford Club of Calgary, says he is just putting the finishing touches on his 1956 Thunderbird as he readies the car for Sunday’s show.

His T-bird is mostly original, but Moore has rebuilt the engine and transmission, and this year was working on the interior, having had the seats reupholstered.

“These cars are never finished, one always seems to be working on something,” Moore says.

Murphy bought his 1949 Ford Business Coupe five years ago, fresh from a farmer’s field near Three Hills, Alberta. The car was a rolling shell, sans interior and most of the engine.

Surprisingly, though, the body was in good condition and all of the factory glass was intact.

“It was my intention to keep the car fairly original,” Murphy says, and he restored the Ford’s running gear including brakes, suspension and steering. He left the paint alone.

Bert Curtiss of Competition Services in Crossfield built a 1950 Mercury Flathead V-8 for Murphy, and this he mated to the original three-speed Ford transmission.

Murphy was inspired to build his Ford as a ‘rat rod’ after he tagged along to help his designer/photographer son Chad of Lucky U Dezine shoot Viva Las Vegas, a rockabilly weekend in Sin City. Part of the festivities includes a car show, and the homebuilt hot rods captured his imagination.

The rat rod is itself an art form, as counter culture builders routinely thumb their noses at big-dollar painted and chromed up rides. There are no rules to the build, and it is completely up to the individual creating the car just what direction they go.

“It’s summed up by a saying I saw on a t-shirt down there – ‘I Do It Because It’s Wrong’,” Murphy says, and adds, “It’s all regardless of what the mainstream is doing.”

He continues:  “I was looking at these ‘underdone’ cars, and how they tie into rockabilly fashion,” Murphy says. “And the whole scene just energized me – the art of it all and how these mostly young guys are so passionate about what they are creating.”

So, for Murphy, the ’49 Ford became a canvas that he transformed into rolling art, adding pinstripes, stickers and paintings at his whim. Stylized Frankenstein interior door panels, for example, are the work of his son, Chad.

But he took the car to another level this past winter as he had the body stripped and painted matte black.

Murphy then had artisans from airbrushers to pinstripers showcase their talents on the outside of the Ford.

Calgary airbrush artist Ryan Vaness of Bloodshot Airbrushing created the rats on the doors, and although painted freehand, are almost exact duplicates.

And Bruce Ander, one of Calgary’s best-kept secrets, according to Murphy, pulled the pinstripes on the trunk lid. “That’s a spectacular piece of art,” he says.

One of Murphy’s friends calls him the ‘doo-dad king’, thanks to what would seem to be a hodge-podge of unique parts he’s added to the car’s interior. Pieces include an altimeter and a bomb drop stopwatch from a B-52 bomber that actually flew combat missions.

“The pilot had them sitting on his mantle, and I bought them from his estate,” Murphy says. There’s also a compass from a military Jeep.

“It’s got items in it that by themselves could be a story, and I can ramble on to people who have the patience to listen about each piece,” Murphy says.

“Some people say it’s too busy, while others love it. But there’s something in there that will help create a memory for someone, and that’s why my wife Jan and I built it.”

Murphy is looking forward to showing off his rolling canvas this Sunday at Spring Thaw.

“The car show is free fun for all ages, and I really enjoy the fun of watching the reaction of kids and newcomers (as they take in) all of the cars, because they’re truly art on wheels,” Murphy says, and adds, “After all, the future of this car crazy passion depends on the next generation; and we were all the next generation at one time. Experiencing the sounds, paint and chrome can ignite that passion and build life-long memories.” 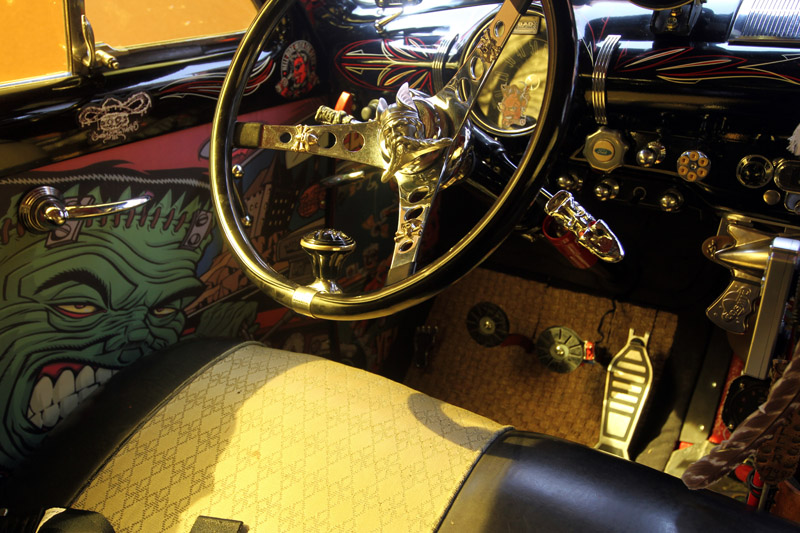