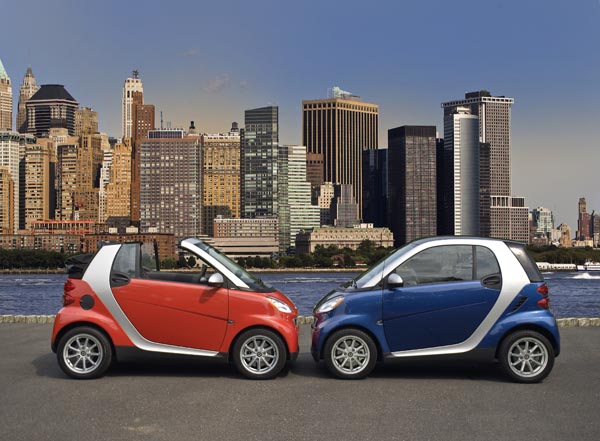 When Mercedes-Benz designed the Smart car chances are good it wasn?t thinking it would be a high-mileage freeway cruiser.
Or, that it would be towing a light-duty trailer on a regular basis.
They obviously hadn?t heard of Les McDonald, a Cochrane-based Smart car owner. This micro-car devotee has put 150,000 km on his Smart ForTwo, driving to Cabo San Lucas in Mexico once, to the Maritimes twice, and Vancouver three times.
?This car can do a lot more than people think it can,? McDonald says of the Smart car?s utility factor. ?With a Clever End (it expands the car?s carrying capacity) and a hitch, there?s just a world of things you can do.?
He figures he?s towed a trailer for more than 110,000 km, confidently pulling up to 275 kg.
This year, the little vehicle that obviously could, and that has transformed the world?s roads is celebrating 10 years of production.
On July 2, 1998, the first Smart car rolled off the assembly line at Smartville ? the nickname for the car?s factory in Hambach, France.
The pint-sized vehicle drove onto roadways throughout Europe, and arrived in Canada in 2004. In early 2008 the Smart car came to the U.S.
Right now, more than 900,000 Smart cars are on the road in 37 countries.
However, the initial idea for the Smart goes back to 1972.

History
Mercedes-Benz created a concept in 1972 for a small car that the company thought would meet driver demands in the year 2000.
On paper, the vehicle was a 2.5-metre long two-seater ? very similar to today?s Smart car. Test mules were fabricated to show that a micro car could be a viable transportation choice.
But the project was held back due to safety concerns. At the time, it wasn?t clear how such a small car could be engineered to meet the strict safety requirements inherent in the Mercedes-Benz brand. But the company didn?t give up. In 1981, Mercedes-Benz developed a concept vehicle dubbed NAFA, the ?Nahverkehrsfahrzeug?, or Local Traffic Vehicle. A prototype was made, but again, the project was put on the back burner. While the NAFA took into consideration safety with rigid side impact protection and ?controlled deformation body components? there just wasn?t a market for a micro car.
And then in the late 1980s the California Clean Air Act was announced. The act stipulated that by 2002 at least 10 per cent of every major automaker?s cars sold in the state would have to be Zero Emissions Vehicles.
This spurred Mercedes-Benz to work on the MCC, or Micro Compact Car, and the company set up a design studio in Irvine, Calif. The design team worked in the community as well as in the studio, studying urban mobility issues as they attempted to sketch a pleasing design for the two-seater. Prototypes ? the Eco Sprinter and Eco Speedster — were built in 1993.
Enter Nicolas G. Hayek, the man responsible for the Swatch watch. He wanted to revolutionize the auto industry with a car fit for an urban market, and Hayek figured he could apply his Swatch watch making concepts to car manufacturing.
In 1994 Micro Compact Car AG was established as a joint venture between Daimler-Benz AG (51 per cent share) and the Swiss Corporation for Microelectronics and Watch Making Industries Ltd. (49 per cent share). The car needed a name, and it was derived from Swatch Mercedes Art ? or Smart.
Propulsion was an issue, and electric, hybrid, gas and diesel power were all considered. In the end, gas/diesel variants won out, and the Smart car was shown at numerous venues in 1995 and 1996. In 1997, Daimler-Benz bought out Hayek?s shares of MCC, and the Smart car was shown at the Frankfurt International Automobile Show.
The Smart measured in at 2.5 m long, 1.51 m wide and 1.52 m tall. A three-cylinder gas engine sat in the back of the car, and safety was assured through the Tridion safety cell together with front and rear crush zones and modern restraint systems. The body consisted, and still consists, of dyed thermoplastic panels, including a front and rear clip and doors.
The first Smart cars were sold in October 1998. In 1999 a direct-injection diesel engine found its way into the vehicle ? and this was the engine powering the Smart when it debuted in Canada in 2004.

Canadian Introduction
JoAnne Caza, director of communications and public relations for Mercedes-Benz Canada Inc., recalls the days before the Smart car came to this country.
?In Canada, customers were calling us, saying they saw the car in Europe and wondered if we were going to be bringing them over here,? she says.
Mercedes-Benz Canada brought over five Smart ForTwos in 2001 and had the motoring press drive the cars. Reaction was favourable, so Mercedes-Benz applied decals to the Smart cars with a sign that said Curious? Included was a website address. The cars were driven in Toronto, Montreal and Vancouver ? and the website, which featured a short questionnaire — was inundated with hits.
?We asked very basic questions, such as what do you think of the look, is it a viable proposition for Canadians, how much would you pay for it,? Caza says. ?Turns out, Canada was dying for this car.?
Mercedes-Benz worked with Transport Canada, and got the go ahead to import the vehicle in February 2004.
?We all thought these would be a sensation in Toronto, Montreal and Vancouver,? Caza says of consumer response. ?But more than 50 per cent of our sales are in secondary and tertiary markets ? places like Saskatoon, Regina, Lethbridge, Chicoutimi. We?ve even got a car in Labrador.?
Canada got the Smart car when it was more than halfway through the lifespan of its first generation. Second generation Smarts were launched in December 2007 as 2008 models.
While Smart had launched a few other models in Europe, including ForFour and Roadster and Roadster Coupe, they never came to Canada. Production of those other models didn?t last long as Smart cancelled them and returned its attention to the ForTwo.
Second generation Smart ForTwo (or model 451) cars are now powered by a lightweight, all aluminum 1.0-litre three-cylinder gasoline engine that makes 70 horsepower and returns 5.4-L/100km city and highway combined fuel economy. Transmission is a five-speed automatic with manual shift mode.
Smart gained a little girth in the redesign, but not much. The car now measures 2.695 m long, 1.559 m wide and 1.542 m tall. In Canada, the Smart ForTwo comes in Pure or Passion models, as well as the Cabriolet. 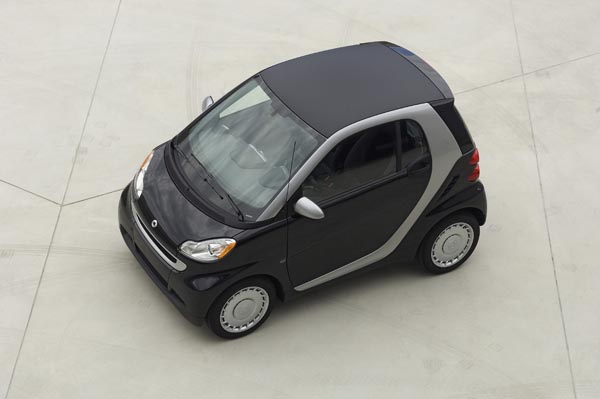 Smart in Calgary
A Smart ForTwo was shown at the 2004 Calgary International Auto and Truck Show where the car captured its share of attention. Some people were ready to buy the minute they saw the Smart sitting in the Roundup Centre. However, the local Mercedes-Benz dealers didn?t have any product until later that year.
?People had to put down a deposit, and then it was hurry up and wait,? says John Sweeney, general manager at Lone Star Mercedes-Benz. ?We filled orders as we could get the cars.?
Lone Star Mercedes-Benz sold 200 Smarts in the first year ? making them runner-up for largest volume Smart retailer in Canada.
?Amazing when you think that here we are in the middle of horsepower country, and we (don?t seem to be) as concerned about fuel economy,? Sweeney says. ?But the cars are funky and unique, and whenever I drove one people would point, wave and cheer. It was such a unique reaction; one I?d never seen before to an automotive product.?
Both Caza and Sweeney agree there is no set demographic for the Smart buyer ? it?s all over the map. All ages, income levels and professions — there?s no stereotypical buyer. And the Smart is moving beyond the urban centre; Lone Star has buyers in rural areas such as McGrath, Tilley, Hanna, Banff and Canmore. 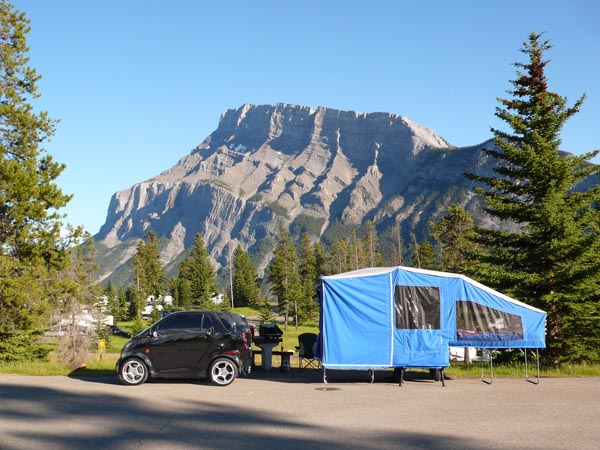 Photo courtesy Les McDonald, Smart Car Universe
It?s a Smart Car Universe
There are now, of course, a large number of aftermarket goodies available for the Smart car. Leading the charge in Canada is Smart Car Universe, operated by Cochrane Smart car devotee himself, Les McDonald. He bought his Smart car more than three years ago to replace a Dodge Dakota V8 pickup truck and started looking for accessories. He ended up importing a rear body extension from Germany called the Clever End that replaces the rear hatch.
He then designed his own trailer hitch to tow a light-duty trailer to carry a canoe or a couple of mountain bikes. McDonald went into production with the hitch, which is made in Calgary.
His company, a web-based store, www.smartcaruniverse.com, now sells the Clever End and hitches for both first and second-generation Smart cars. And with the U.S. market open to him, McDonald is able to work with more suppliers and obtain parts, such as wheels, body modification kits, exterior racks, trailers and storage solutions.
McDonald?s market in Canada is largely Victoria, Vancouver, Calgary and Toronto. The hot spots in the U.S. are California and Florida. 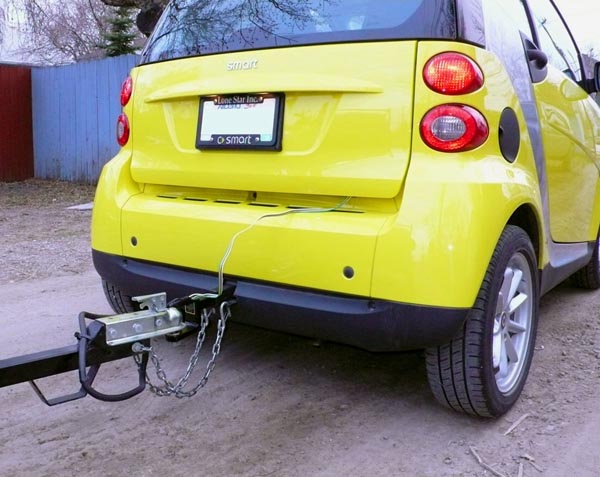 He loves his Smart car
Twenty-seven year old Mike West works at a major GM dealership in Calgary. In April 2007 he rented a Smart car ? by August he owned one. And in May 2008 he bought a brand new second-generation Smart ForTwo. He?s put 6,000 kilometres on the odometer.
?The car comes with all kinds of bells and whistles, and I get 40 mpg,? West says. ?I paid $19,800 for the ForTwo Passion, with MP3 jack, six disc CD, heated seats, tire pressure monitor, shift paddles?it?s loaded.?
West says the car promotes a healthier lifestyle as the tiny Smart dictates living with two seats and a small trunk.
?You end up possibly walking more, taking the bus, or car pooling with friends if we?re all going somewhere together,? West says. He encourages those interested in the Smart to visit www.clubsmartcar.ca. 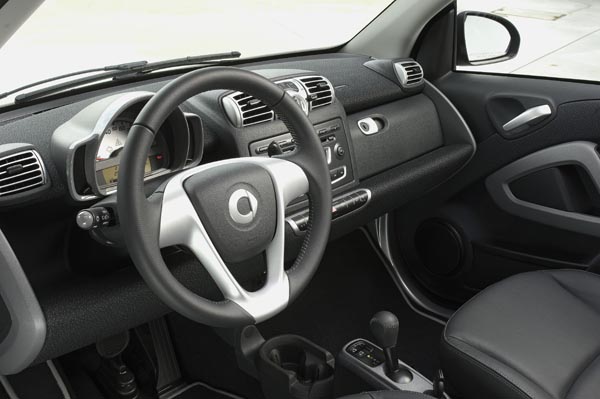