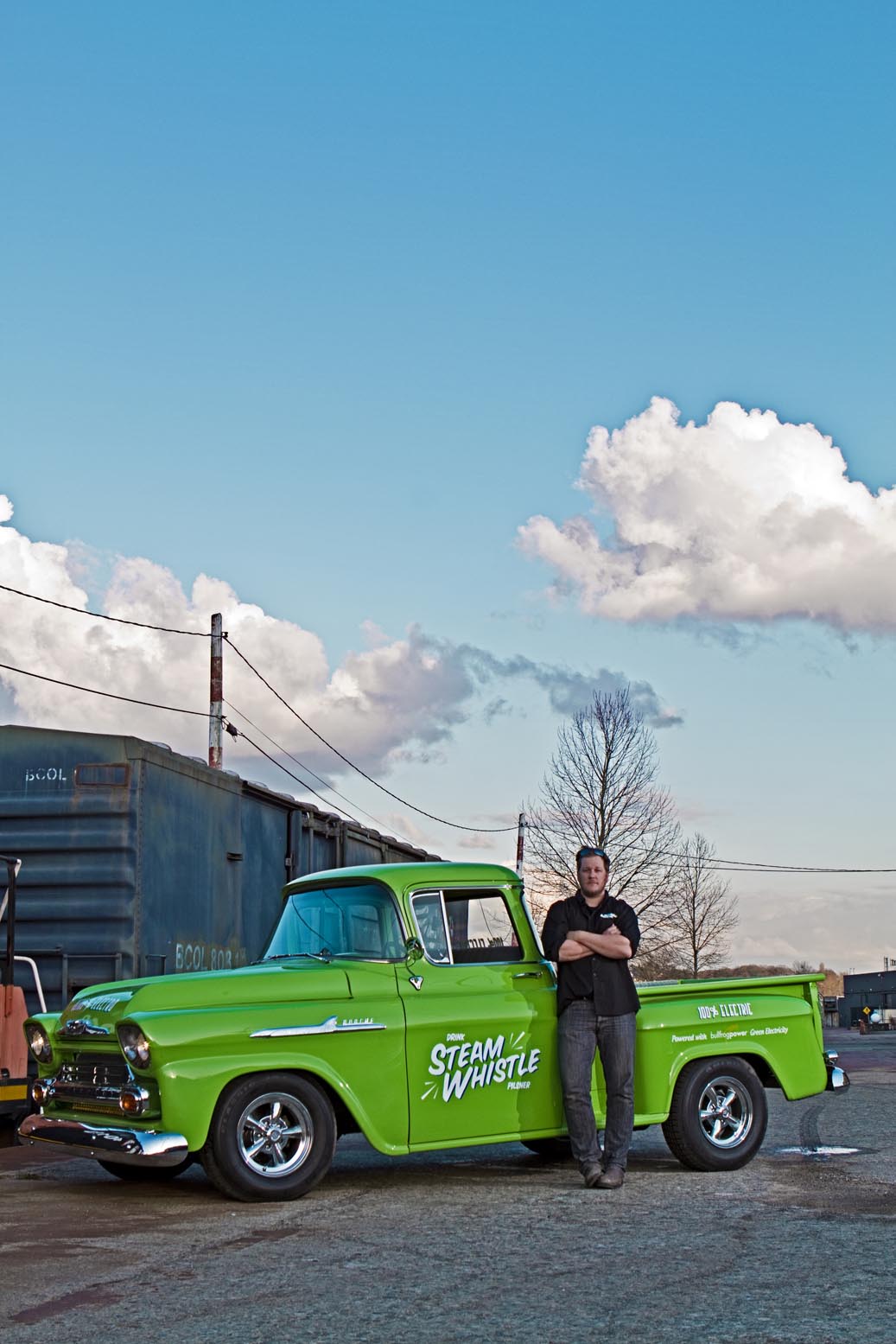 This week I get to write about two of my favourite topics — old trucks and beer. Now, I’m not a six-pack a day kind of guy, but I do occasionally enjoy a good cold Pilsner or lager. As for old trucks, what’s not to like?

Especially when the truck in question has been brought straight into the 21 st century. Witness Retro Electro, a 1958 Chevy Apache half-ton truck.

No gas-guzzling V-8 engine lurks under the hood. Instead, there’s a high-efficiency AC motor capable of generating 465 foot-pounds of torque.

That is enough power to lay strips of rubber, and the truck’s creator, Vancouver-based Mike Kiraly, enjoys doing nothing more than just that.

Well, he also enjoys talking about beer, and doing his job as a B.C. sales rep for Steam Whistle Brewing.

Located in the historic John St. Roundhouse in Toronto, Steam Whistle Brewing is an independent player in Canada’s beer making industry. Their product is marketed in Alberta, B.C. and Ontario. The company is arguably one of the greenest producers in the country, from the power they consume to the equipment they use.

There are plenty of other examples of how green-minded Steam Whistle is, and another could include the fact they keep some old vehicles out of the scrap yard. The company uses a fleet of highly visible, green painted vintage vehicles to deliver its brew in cities including Toronto, Calgary and Vancouver.

“I was talking to someone about our green fleet, and he said to me they weren’t really green,” Kiraly says. “My rebuttal was that we helped keep the same vehicle on the road for more than 50 or 60 years.” 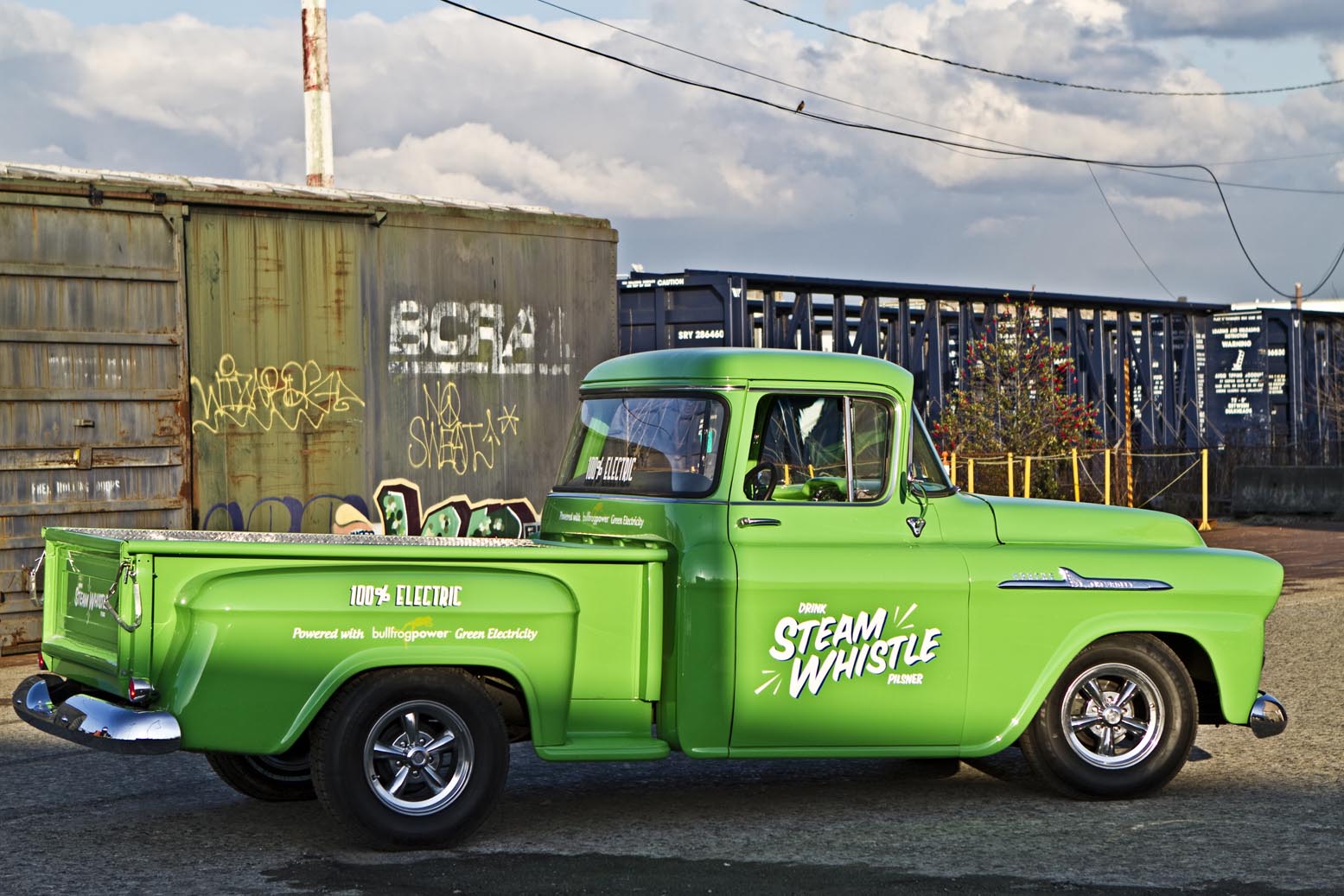 After that exchange, Kiraly got to thinking about really being green, and he saw an opportunity to create a project that kept a vintage vehicle on the road, and completely updated that ride with zero tailpipe emissions. Something that was completely in line with Steam Whistle’s green initiatives.

Kiraly had to sell the project to Steam Whistle’s top brass, but that wasn’t hard to do as he says he simply ‘oozed passion’ about building an electric-powered vintage pickup truck.

Kiraly, 33, is based in Vancouver, and has been working with Steam Whistle for two years. His background, if you can believe it, is as a scientist – a molecular biologist specializing in endocrinology and diabetes research.

“I went through a major career change, from scientist to beer guy,” Kiraly says, and laughs, “I’m the first doctor beer rep that we know of.”

After getting the go-ahead Kiraly began looking for a suitable truck to modify. He had been driving a 1957 Chevy truck around Vancouver, and one day found a note tucked under the windshield wiper blade. The writer of the note was offering a 1958 Chevy Apache, and in November 2009 Kiraly bought the truck.

“I wanted to build an electric hot rod truck, one that would do a burnout, and travel 150 km on a chage,” Kiraly says. To do this, Kiraly worked with a group of people, including his father, as they designed an electric drivetrain and restored the truck.

Joe Mizsak did much of the metal fabrication and restoration, while Lloyd Wagner was enlisted for bodywork and paint. Kiraly’s friend Trevor Stoker is the lead engineer at Azure Dynamics, a hybrid vehicle company in Vancouver, and he helped design the running gear, while his company supplied the motor and controller. Randy Holmquist from Vancouver Island’s Canadian Electric Vehicles supplied battery management hardware.

Everything to do with the gas engine was pulled, and the group put in an AC motor with a driveshaft direct to the rebuilt rear end. Under the hood went a controller – about the size of a boom box – and electrically powered hydraulic pumps were installed to handle power steering and brakes. The truck is fitted with a Camaro front end. 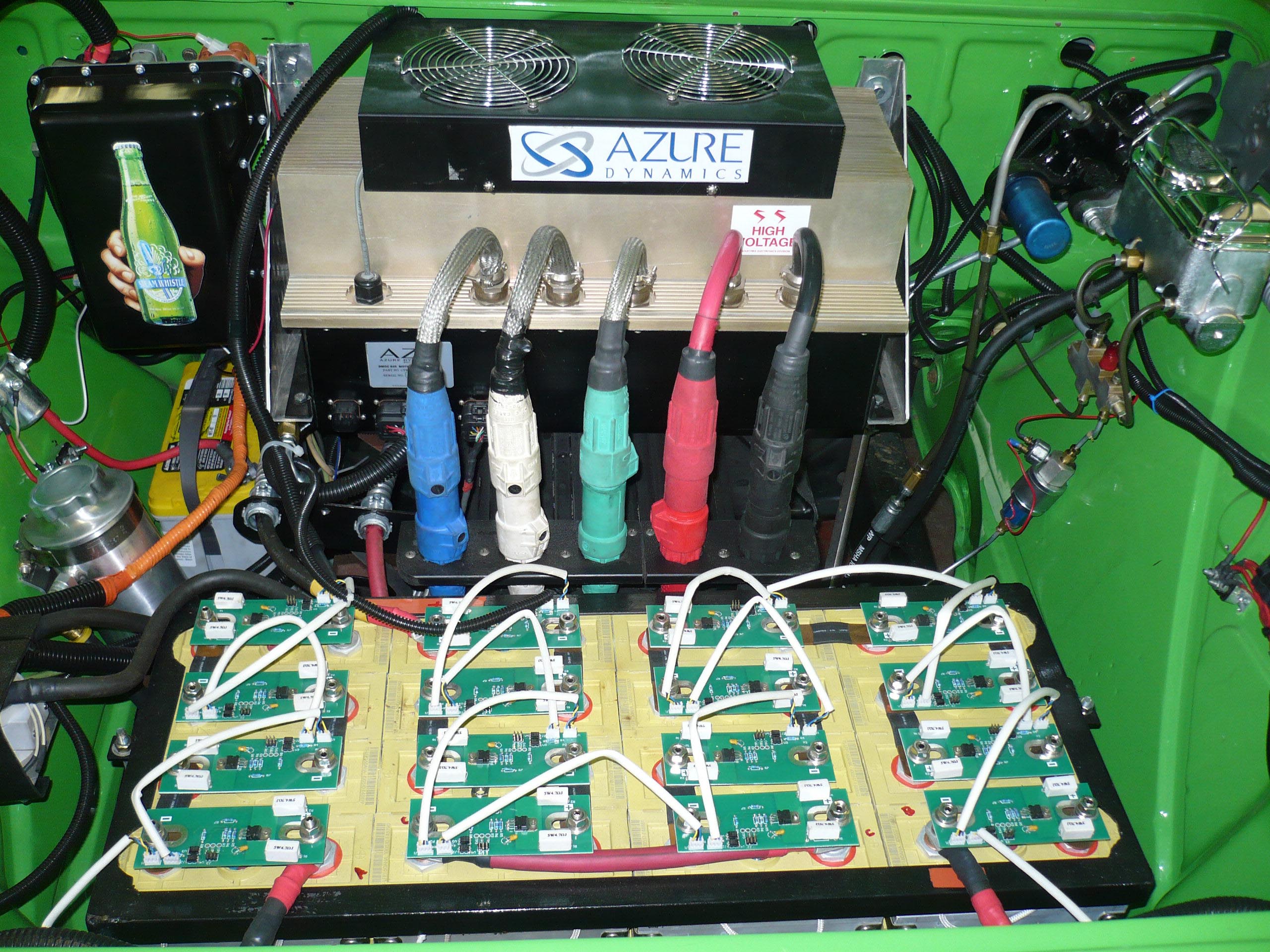 Twenty-four lithium batteries fit into the bed of the truck, and this power supply offers a 150km driving range with an 8-hour recharge period using a 220V/30A service. The truck is geared low so that it has a tremendous amount of grunt, and has a top speed of about 90 km/h – which will be just fine for its duties around Vancouver. Green energy company Bullfrog Power provides electricity for the truck, and 100 per cent of the juice is wind generated.

“The one concern I had was safety,” Kiraly says. “I needed to build a truck that is idiot proof. There are inertia control switches, so the truck shuts down (and the high voltage power) is disconnected should the truck ever be in an accident.”

It took a year and a half to build, and Kiraly first drove Retro Electro earlier this year. “Like any other old vehicle there’s always something to tweak,” he says.

Without the gasoline engine, Kiraly says the truck is extremely quiet. “But when you’re driving it, you hear all kinds of other noises you would usually never hear in the cab, and you’re constantly wondering where they’re coming from.”

Vintage-style hand lettering Retro Electro and Steam Whistle graphics top off the Chevy, and was done by Stefanie Goodrick of Sign Me Up Designs.

Now, Retro Electro has been shipped by rail to Toronto to visit the brewery, and returns to B.C. this summer as Kiraly tours with it around cities such as Vancouver, Kelowna and Kamloops. There are also plans to ship it to Alberta.

“The whole point is to get people talking about alternate energy solutions, and Retro Electro doesn’t do anyone any good sitting in a parking garage.” 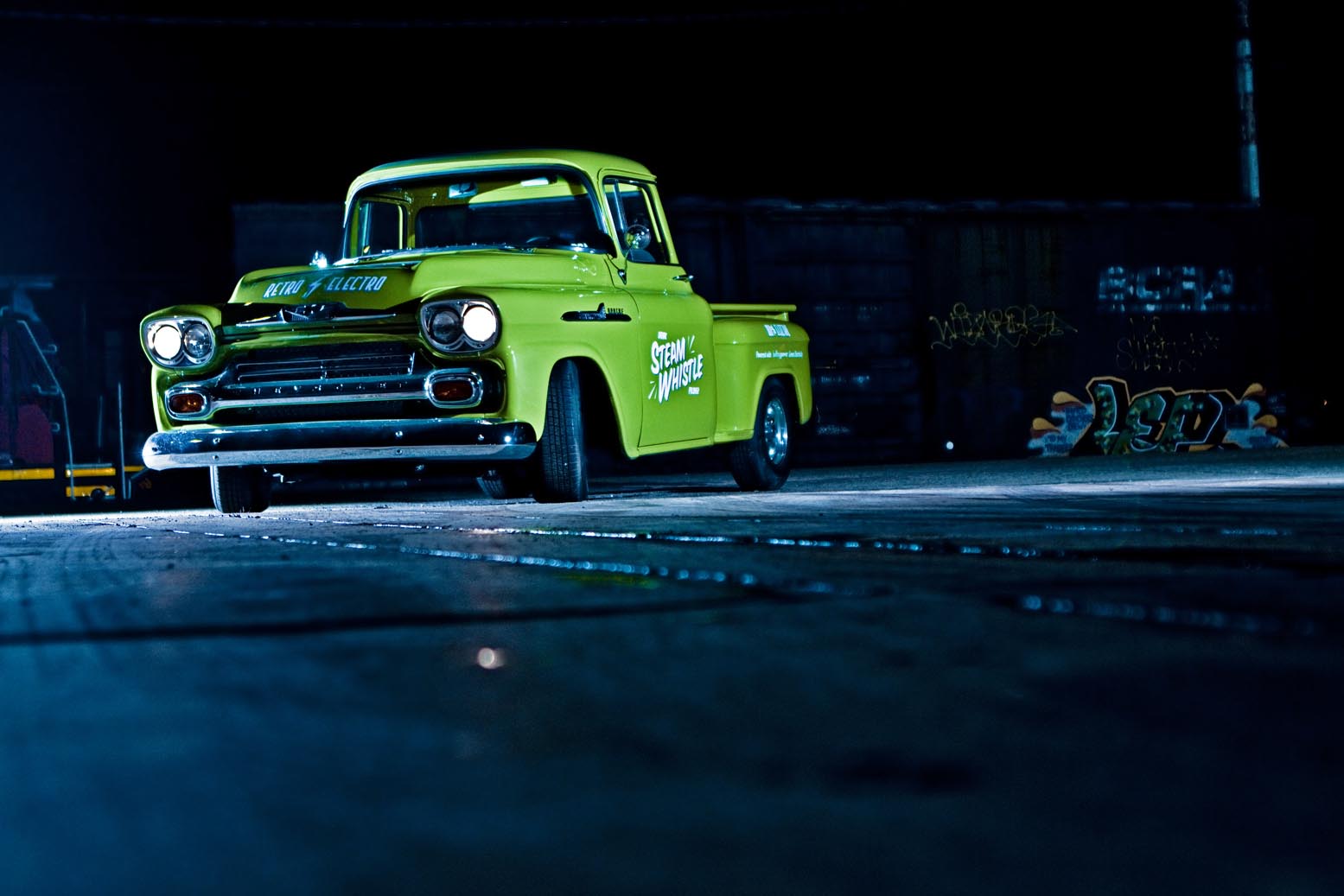