From Larry Zglobicki of Winnipeg come these great shots of Northwest Cycle & Motor Co., circa the mid-1930s, at 551 Logan Ave. The shop opened in 1912, and while it started out carrying Harley-Davidson, over the years they imported and sold just about every brand of motorcycle and scooter, including Ducati, Lambretta and Vincent. It stayed in its Logan Ave. location until 1978, when H-D Winnipeg bought out the company.

There are some great looking girder fork machines in the collection, from Ariel to Sunbeam.

Below is a shot of Larry’s dad, Frank (third from right), who was in the 10th Dragoons – Polish 1st Armored Division. He was in North Africa, France, Battle of Britain & Atlantic, Norway, Italy, Normandy, Netherlands and Belgium. Thanks for sharing the images, Larry. If anyone’s got Northwest Cycle & Motor Co. tales to tell, please leave a comment. 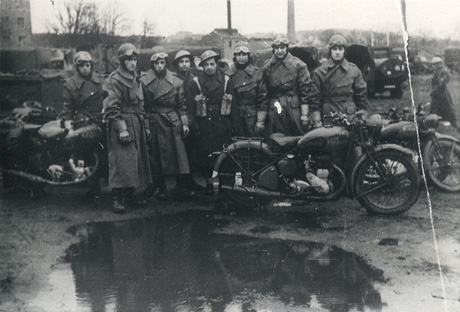 …and, here’s a little bit more. This was published in the Antique Motorcycle Magazine, and was a part of my Pulp Non-Fiction column. In it, I took a look at a 1950 publication from Northwest Cycle & Motor Co. of Winnipeg, Manitoba. This is a hefty 64-page catalog chockfull of interesting motorcycles, parts and accessories. I had some help from AMCA president Ross Metcalfe in researching Northwest Cycle & Motor, as the city of Winnipeg is his hometown. He sent me an article written by Chuck Murray about the history of Harley-Davidson in Manitoba – and that history is intertwined with that of Northwest Cycle & Motor. 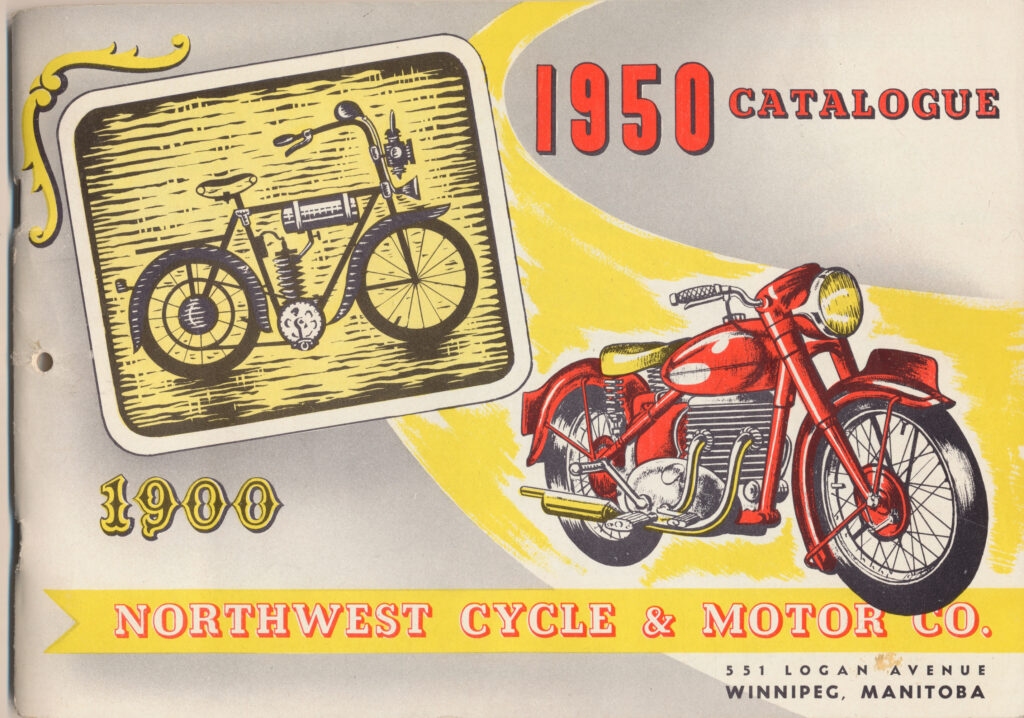 According to Murray’s research, it’s thought that August Buchoski started the business around 1912. In the Winnipeg Free Press archives, Murray discovered newspaper ads offering new 1912 Harley-Davidson motorcycles from Northwest Cycle & Motor, and by the end of the First World War the storefront was at 519 Logan Avenue. Around 1920, Buchoski sold Northwest Cycle to Minty Stonson who moved the store into an old bank building at 551 Logan Avenue and then became an official Harley-Davidson retailer, selling mainly H-D and Henderson until 1930, when Henderson became defunct.

In the 1930s, Stonson added British-made Triumph and Ariel machines to the sales roster, and this did not please the Harley-Davidson factory. As a result, Harley-Davidson opted to put in a second retailer, with Brown and Winters gaining a Winnipeg H-D sales agency.

“Minty bought them out for a song. Minty liked the Harley-Davidson motorcycle, naturally, as he had built up the business for them. Harley-Davidson realized their mistake and asked Northwest Cycle to take back the agency, which they did, agreeing to do so if no further attempts were made to put in another dealership in Winnipeg.”

Stonson retained ownership of Northwest Cycle until 1945, when Joe and Charlie Perkins purchased the store. While there wasn’t much inventory on the showroom floor immediately after the war, in just five short years the Perkins’ had turned Northwest Cycle & Motor Co. into a powerhouse retailer on the prairies. A glimpse at the “1950 Catalogue” here shows the storefront was still at 551 Logan Avenue, and Northwest Cycle had diversified its range to include Ariel, A.J.S., Harley-Davidson, Norton, Triumph, Vincent and Whizzer.

Inside the front cover, a letter reads, “Dear Riders and Prospective Customers:

“As the year 1950, marks the turning of the half century we can look back over the last 50 years with real pride and joy as we take stock of the miraculous changes in motorcycling during that period. Imagine driving the old belt drive Harley as compared to the new 74 O.H.V. model of today. And all the beautiful, newly designed, sturdy British jobs listed in this catalogue.” 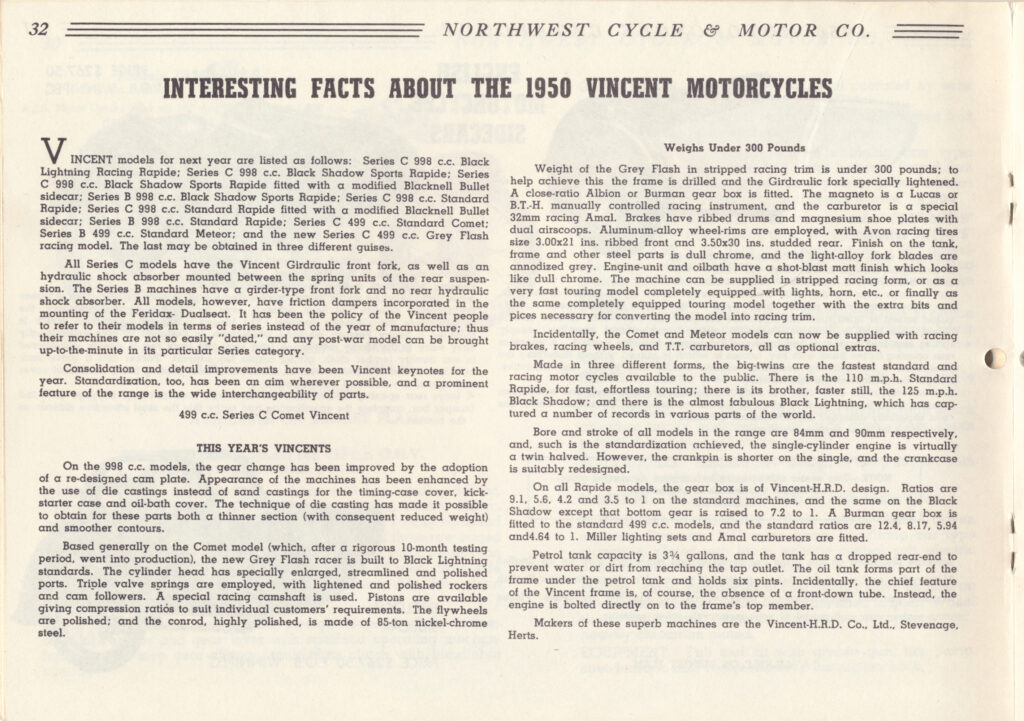 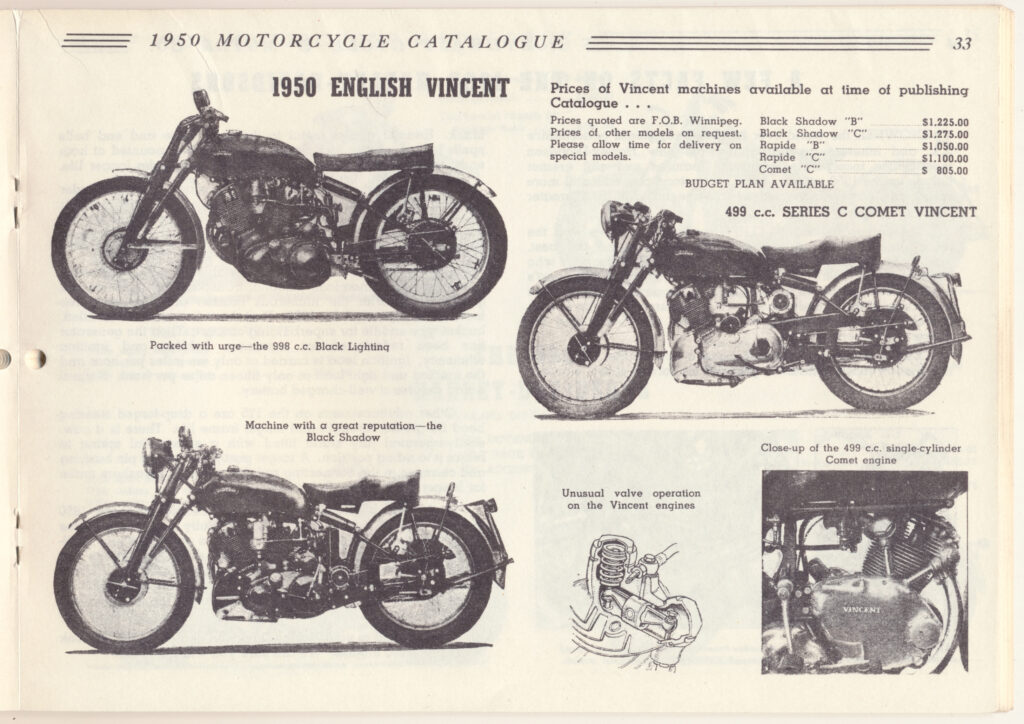 In regards to the Series B and Series C references, Northwest Cycle notes, “It has been the policy of the Vincent people to refer to their models in terms of series instead of the year of manufacture; thus their machines are not so easily “dated”, and any post-war model can be brought up-to-the-minute in its particular Series category.”

From the flashy Vincent to the utilitarian Whizzer, Northwest Cycle’s catalog first four pages were dedicated to the American-made motor that could be installed in a bicycle to make a motor-bike. 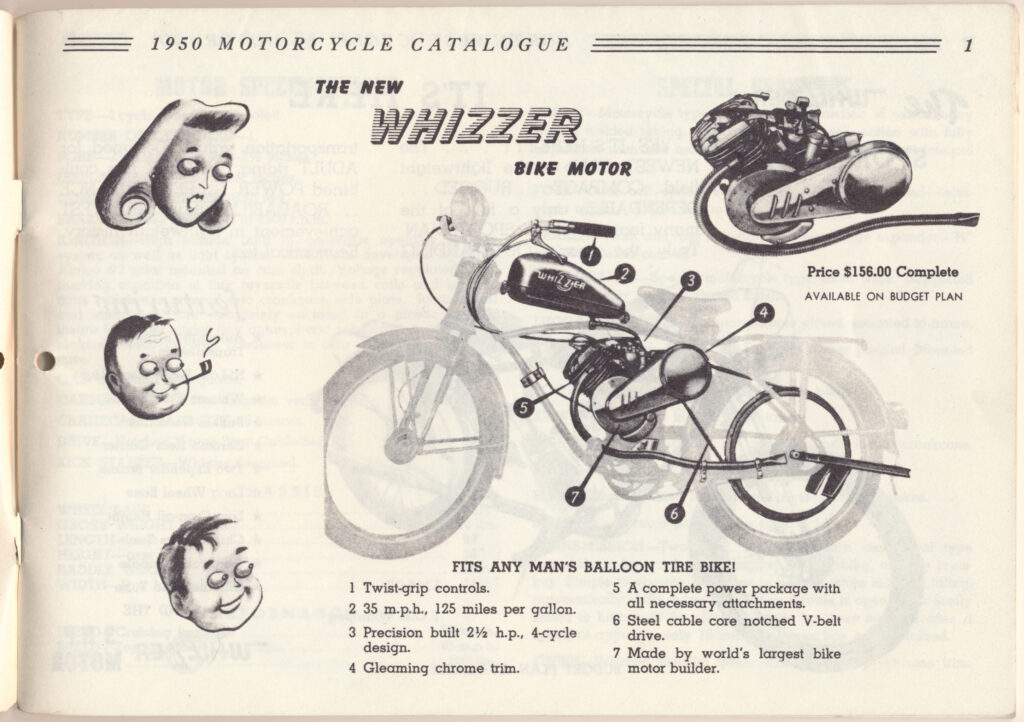 Given the twist grip controls, this would most likely have been the Whizzer J-series engine. Price for the Whizzer power unit package was $156 in Canadian funds, while a complete Schwinn bicycle model WZ507, ready for motor installation, could be purchased for $100. Also listed in the catalog is the complete Whizzer Sportsman for $365. 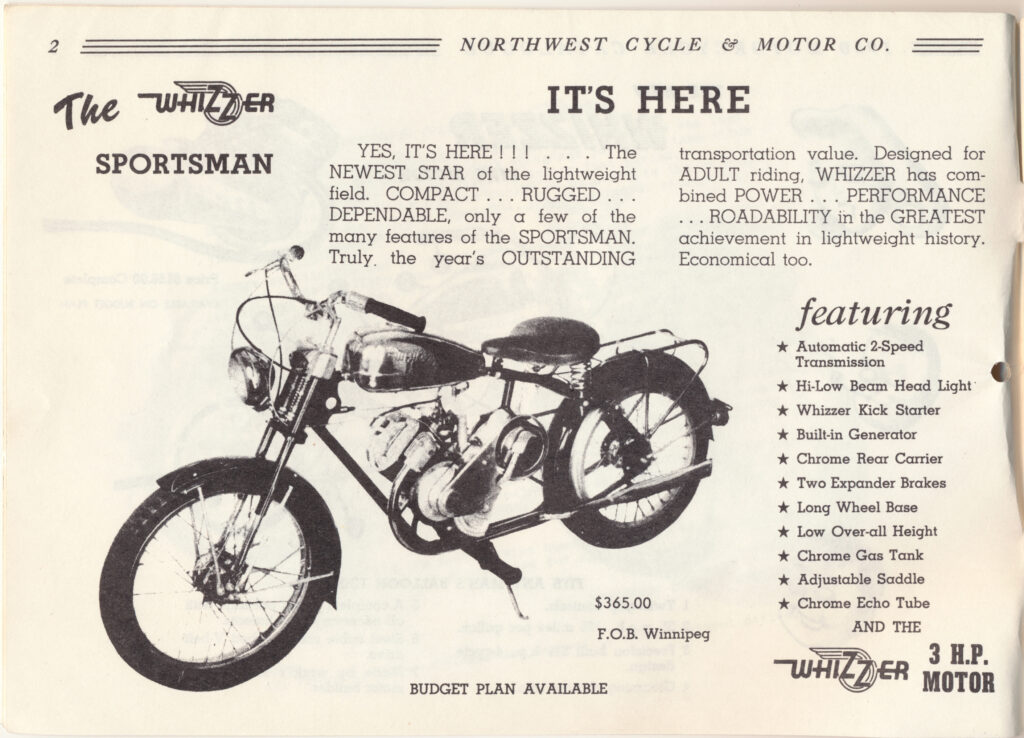 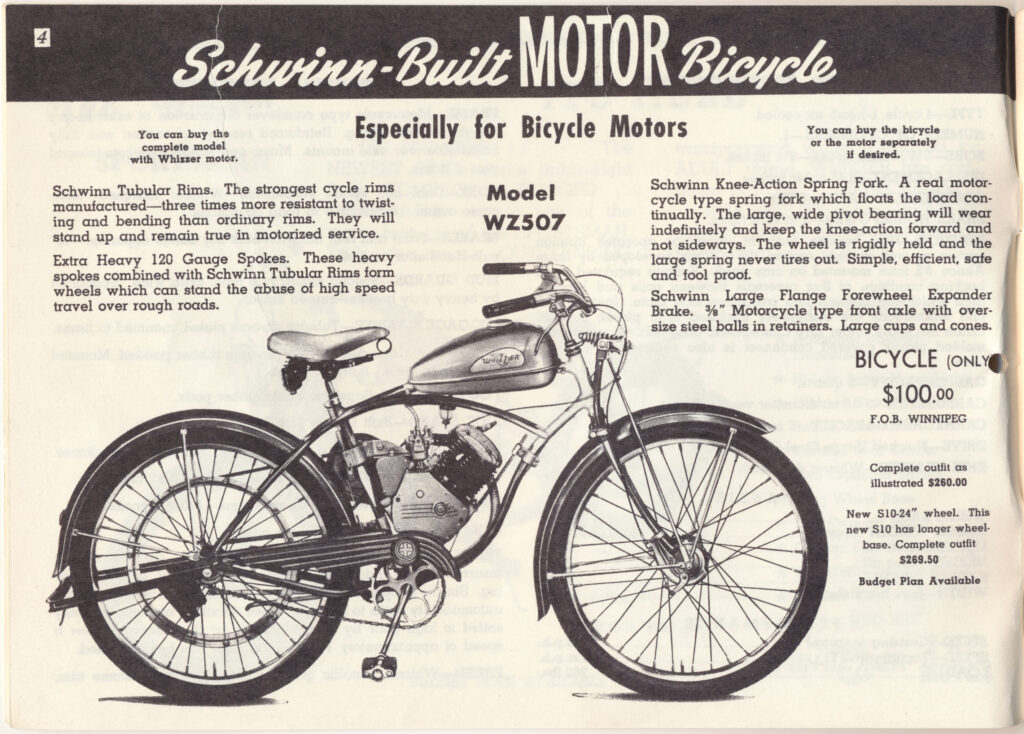 They enthusiastically wrote, “YES, IT’S HERE!!!…The NEWEST STAR of the lightweight field. COMPACT…RUGGED…DEPENDABLE, only a few of the many features of the SPORTSMAN. Truly, the year’s OUTSTANDING transportation value. Designed for ADULT riding, WHIZZER has combined POWER…PERFORMANCE…ROADABILITY in the GREATEST achievement in lightweight history. Economical, too.”