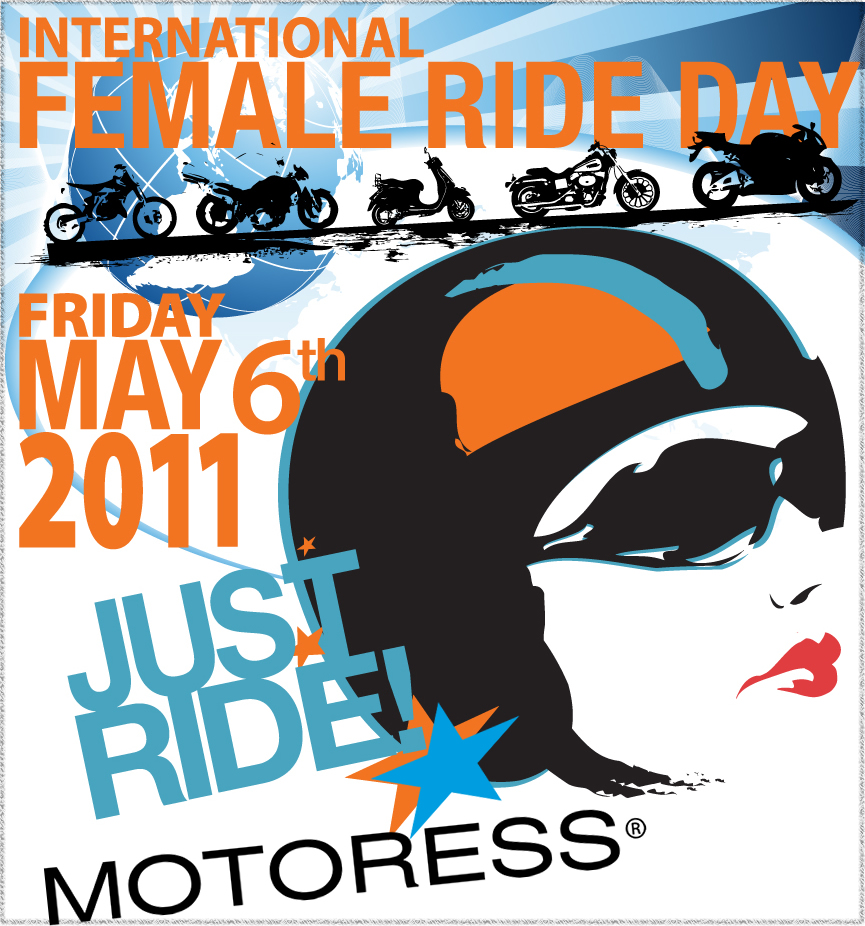 Here’s a story about founder Vicki Gray, written in 2007 when she was just getting the wheels rolling on this initiative.

Women on motorcycles will put rubber to Calgary roads – and across Canada — May 4 as part of the first ever National Female Ride Day.

“The focus here is to shine a spotlight on women who ride, and enhance awareness of female riders,” Gray says from her home in Toronto. “I just want women to ride on that day.”

Gray, 48, has been riding a motorcycle since 1983. She got involved with bikes just after she’d been transferred to Nova Scotia while working for Revlon International as national training manager.

“I needed an outlet from that demanding career,” Gray says. “And I forced myself one summer to take sailing lessons. While that was exciting, it wasn’t quite enough.”

Before Gray had her first car she says she was going to buy a scooter – but that plan was scuppered when the intended machine was vandalized. And, she recalls riding around in first gear aboard a boyfriend’s off road motorcycle.

“Even back then, I guess I was interested,” Gray says. “So, I took the Gearing Up program (the Canada Safety Council motorcycle training course) in Dartmouth.”

After completing the course Gray rented motorcycles to ride in Nova Scotia. At the time she favoured cruiser-style machines, and even bought a Honda CM450 Custom when she returned home to Ontario. Gray enjoyed motorcycling so much she started instructing with the Canada Safety Council, and eventually traded her Honda 450 Custom for a 1987 Honda CBR600F.

The CBR600F is a sport bike, and Gray says she quickly became addicted to the machine’s power and the speed. But with another life change — this time when she moved to St. Maarten in the Carribean – Gray opened her first school, the “Pro Rider Motorcycle School”. She taught thousands how to ride, from beginners to the Dutch Antillean police, using her own fleet of dual-purpose street/dirt bikes.

By 1994 Gray had married and moved to the Netherlands. Here, she bought a Suzuki GSX600F and began touring Europe, including the Swiss Alps. When a friend talked about taking a motorcycle race licencing course Gray said she’d attend with him.

“That was it, I was hooked,” Gray recalls. “Three weeks later I had my first race.” After that, Gray says there was no looking back. “I started buying more and more equipment, and the next thing I knew there was no getting out.”

While living in Europe Gray raced both Hondas and Ducatis, and has been sponsored by world championship teams Ten Kate Honda and Ducati North America.

“On average, when a woman gets involved with racing it’s because a boyfriend, husband or father gets them interested,” Gray says. “Very seldom does a woman just walk into this.”

But that’s what Gray did, and she says it took her some time to learn the ropes; “I didn’t know how much a motorcycle could be altered, and how a bike could be made to fit and work for me.”

Gray moved back to Canada in 2006, and has launched Motoress – a website (www.motoress.com) and a brand she hopes will help inspire other women to reach any of their two-wheel aspirations. Whether it’s a scooter, a cruiser or a sport bike they wish to ride, Gray says Motoress is a brand that will speak to all women.

And National Female Ride Day fits into her mandate. While NFRD was intended to just be a Canada-wide event and Gray thought she might have 500 riders, she says she’s had to rethink the scope of the day. “There are so many women from the U.S. and other countries who’ve decided to join in. I could potentially have thousands of women riding on May 4.”