As a writer for the Calgary Herald Driving section I always look for a local angle to any column I write for the paper. There wasn’t one for this piece, hence the first line in the story. But as you’ll read, the story is just too good not to share. Good luck to all those riding.

Warning: For those looking for local or even national content in the following column, there is none.

However, for anyone interested in motoring, it’s a story worth sharing.

Next week on September 10 more than 90 riders aboard motorcycles manufactured prior to 1916 will leave behind the bluffs overlooking the Atlantic Ocean in Kitty Hawk, North Carolina.

Riders of these rare and sometimes delicate machines will then tour through 11 states and cover some 5,265 km (3272 miles) as they test their mettle (or, is that metal?) participating in what has been dubbed the Pre-1916 Motorcycle Cannonball Endurance Run (www.motorcyclecannonball.com).

And then, on September 26 and of all those miles later, hopefully more than a handful of riders will roll onto the pier at the Pacific Ocean in Santa Monica, California.

This ride was the brainchild of one Lonnie Isam Jr., of Sturgis, South Dakota. Isam and his friends often talked about getting their pre-1916 motorcycles together for a ride across America, à la Erwin George (Cannonball) Baker.

Born in 1882, Baker was known for his automobile and motorcycle racing exploits, and most notably his coast-to-coast riding adventures. In 1914, he set a record by crossing America in 11 days aboard an Indian motorcycle.

“Lonnie and his friends had been talking about doing a run like this for a long time, and Cannonball Baker was their inspiration,” says Felicia Morgan, Motorcycle Cannonball director of communications.

In 2009 Isam decided to go ahead with the run. And that’s when things got exciting. More than a few folks expressed interest, and the event soon took on a life of its own.

“People from around the globe expressed interest, and this has become universal,” Morgan says. “These are all riders who want to ride their veteran bikes, bond with the road and the people they meet, and enjoy the environment and scenery as they pass through it.”

Route master John Classen has driven the roads twice, mapping out highways and distances that ensure most days are 250 miles or shorter. He also wanted to ensure riders spent little or no time on an Interstate, but they will have to cover 160 km on one — that only occurs in New Mexico where no other option exists.

And that’s a good thing. Many of these pre-1916 motorcycles would not survive an extended blast down the freeway.

For the most part, motorcycles built prior to 1916 are quite different from one brand to the next. At that time, the ‘cycle industry was in its infancy, and manufacturers such as B.S.A., Excelsior, Flying Merkel, Harley-Davidson, Henderson, Indian, Triumph and Thor were very inventive in their engineering.

Early motorcycles were little more than bicycles – including the pedals – with motors attached somewhere to the frame. Final drive could be via chain or belt, and transmissions, if there was one, were very rudimentary. Pedals were often meant to aid starting, or to help a machine climb a hill.

“Most of these bikes, it’s not like you can ride down to the local dealership and get a part if you need one,” Morgan says. 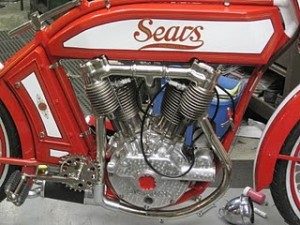 One young rider, Matt Olsen, 26 of North Dakota has literally produced a 1914 Sears motorcycle – frame, forks and just about everything else around a rebuilt V-twin Spacke motor. He’s brought the process of recreating a 100-year old motorcycle into the 21 st century with a blog, www.pre1916scramble.blogspot.com, and almost daily Facebook updates. 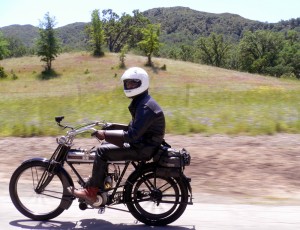 Pete Young, 40, from San Francisco, Calif., will have two motorcycles at the start in Kitty Hawk. He’s planning on running a British-made 1913 Premier, a 500cc sidevalve single-cylinder motorcycle. His machine has a rubber V-belt drive to the rear wheel, where therein resides a three-speed rear hub with a clutch. Having a three-speed hub gives him some advantage when climbing grades.

Young, an engineer and avid vintage motorcyclist, will also have a 1916 1,000cc V-twin Excelsior as a ‘spare’ bike, in case the Premier breaks to the point where he can’t repair the damage.

“I’ve been through the bikes quite a bit, checking the mechanicals and remaking several parts where I’ve had to,” Young says. “I’ve spent about every evening in the shop for close to a year. My wife, Kim, and the kids have been very supportive.”

The ride will be physically grueling for participants. Did Young invest in a gym membership?

“I meant to, but never got around to it,” Young laughs. “I’ve been walking a bit and doing some push ups and sit ups, though not as much as I should have done.”

There are three classes for the Cannonball. Class 1 is the single cylinder, belt drive, and no transmission machines. Class 2 is the twin cylinder bikes, but any single speed four-cylinder machine is allowed in this class. And Class 3 (this is where Young’s machines fit) features all of the pre-1916 motorcycles, regardless of number of cylinders, with a two or three speed transmission.

“This is a once-in-a-lifetime opportunity, and I didn’t want to miss it,” Young says of the 2010 Cannonball Run. 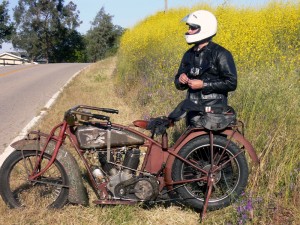 Pete Young at rest with his 1916 Excelsior.