This story was first written for the Calgary Herald’s Driving section, and was published on March 9, 2007. There’s a postscript at the bottom from 2017.

From 1970 to 1986 Calgarians Trevor and Wendy McGrath traveled the world.

And the only home they had during those 17 years was a 1970 Volkswagen Kombi van.

The McGraths, originally from Australia, were full of wanderlust in the late 1960s. They set off in a British-built Commer camper van and toured Europe and a bit of North America, including Canada. The pair even lived in Edmonton for a year in late 1968 and early 1969 where Wendy worked as a teacher.

They were moving again in 1970 when they traveled to Los Angeles. Here, they sold the Commer and returned to Australia.

“We had a nice home in Australia, which we had rented out,” Wendy says. She adds that when they returned to Australia they didn’t plan to spend the next 17 years traveling.

Their initial plan was to purchase a new vehicle for ‘overland’ travel, and circumnavigate Australia. An overland vehicle is something that will comfortably travel over all types of roads and through all types of conditions.

The pair bought the 1970 VW Kombi van brand new for $2,800, and Trevor worked to outfit the bus as an overland vehicle. He started by cutting out the van’s metal roof and installed a taller, fibreglass roof. A living area was created that included a gas stove, refrigerator, stainless steel sink, cupboard and wardrobe storage, bed and toilet.

“It’s amazing what you can get into it (a VW van) with a bit of ingenuity,” Trevor says. “We chose the VW over, say, a Land Rover, because the VW Kombi vans were so universally distributed, they were everywhere. New or used parts could be had worldwide.”

He performed many modifications, including sheeting the underside of the VW with aluminum panels, and fitting a plastic screen to cover, and help preserve, the glass of the windshield.

Around the time Trevor was finishing up outfitting the van the pair decided to sell up everything in Australia and truly tour the world.

“All of our friends were tied down with children and mortgages,” Wendy says. “And one day when Trevor was mowing the lawn I took him out a drink. We sat in the shade, looked at each other and said: ‘What are we doing here?’

“Once you’ve traveled around the world a bit, the freedom of that is something you can’t shake, and it’s very hard to turn your back on.”

After selling their property in Goulburn, a town about 192.5 km inland from Sydney, the McGraths invested every penny at close to 18 per cent. “We said we’d keep going until we reached equilibrium, and stop before we would eat into our capital.”

Ultimately, the McGraths toured the world. The van was shipped more than 68 times, and they toured at least 200 countries, including England, Iceland, Afghanistan, India, Morocco, Malaysia, South Africa and Chile.

Trevor had painted a map on the side of the VW that indicated their travels, with overland routes marked in red, air routes in black and sea routes in blue. They say that $100 a week was enough money to cover all of their expenses, including fuel and food. The McGraths never stayed in campgrounds, instead finding sites where the van could be easily concealed.

“We were hassled on numerous occasions, you can’t travel around the world for 17 years without problems,” Trevor says. “Very often we were camped in areas where only idiots would camp, and we had strategic plans on how to get out of tight situations.”

Trevor replaced the engine at 50,000 to 60,000 mile intervals. “We were on the fifth engine (when they were done traveling), and engines were always replaced from a preventative point of view. The van was our lifeline, and we didn’t want to be forced away from it,” he says.

By 1986 the McGraths knew they had to stop. They ruled out going back to Australia, and said they’d liked Alberta when they were here in 1969. And, they realized Calgary was close to the mountains – a key influence as the pair have skied just about every major ski resort in the world – and they wanted to be close to Lake Louise and Sunshine. They purchased a condo in Calgary and kept the VW in storage and used it for annual holidays. By 2006 Trevor says the van had to be sold as storage and insurance fees were becoming prohibitive, and the van itself was beginning to deteriorate. He listed it on eBay and created a website to help inform potential bidders. (The site has been updated, and can be seen here.) The van eventually sold, and is reported to have stayed in Calgary.

“That was the saddest day of my life, to walk away from that van,” Trevor says. “It was like the child we never had, and it truly was just the three of us.”

Here’s a postscript to that story. In early January, 2017, I caught up with Wade Idt of Calgary. He’s the fellow who purchased the McGrath’s van. He tells me he’s done nothing to alter the vehicle except restore some of the lettering on the side of the van, and that he and his family of four routinely use the bus and do go camping in it. Well done! 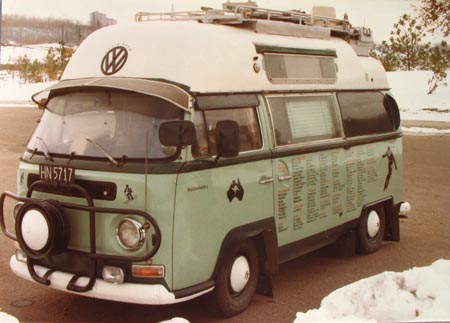