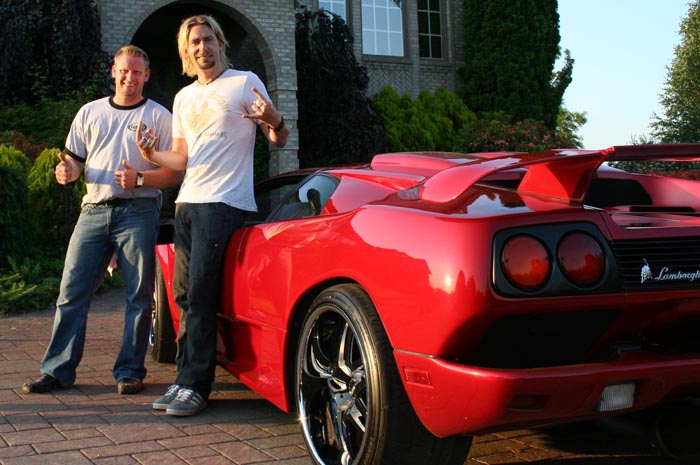 When finished with a custom audio job, and to test the sound, the crew at Fuel’d Designs in Red Deer will often slip a Nickelback CD into the new stereo and crank up the volume.
So when audio expert Travis Gustafson was done with an install in a 1999 Lamborghini Diablo — which just happens to be owned by Nickelback’s lead singer Chad Kroeger — he played Follow You Home from the album All the Right Reasons.
“That song’s got some wicked double bass drum at the beginning,” says Austin Weezy of Installation Station, the audio shop that falls under the Fuel’d Designs umbrella.
The custom audio, interior and paint shop in Red Deer got their hands on Kroeger’s Lamborghini by literally tracking him down through a friend of a friend, who passed along a magazine that featured a custom truck with upgrades done by Fuel’d Designs.
“He (Kroeger) got to see the article and read about our shop,” Gustafson says. That got the ball rolling, and Kroeger decided to hand over one of his cars. It could have just as easily been his Hummer or his Corvette, but according to Gustafson, Kroeger wasn’t happy with the tan interior of his Lamborghini. The crew drove out to Kroeger’s Abbotsford home and loaded up the Diablo in their covered trailer and brought it back to Red Deer, where they gutted the car completely, and did a custom interior and audio install.
“He (Kroeger) wanted the Lamborghini converted from tan to black leather,” Gustafson says. “And we wanted to update the interior, and change the styling a bit by making it look more modern. We also wanted to integrate the audio so it looked like the car would have come from the factory.”
High-end audio components from Audison-Hertz, including two rear 8″ sub woofers, two 5 1/4″ rear fill speakers, and 8″ three-way speakers in each door are all powered by a five channel Audison amp. They also installed a 10″ video screen in the dash, and made hand-built seats and custom door panels.
“Chad’s super laid back and easy going,” Gustafson says. “When we delivered the car we got to hear the new album (Dark Horse) before it launched, and spent the night hanging out in his studio.”
Kroeger obviously liked the work, because the crew didn’t come back to Red Deer empty handed — they hauled back his Plymouth Prowler and are preparing to do a complete makeover on that car. You can watch the Kroeger Lamborghini project from start to finish on www.imediatv.ca.