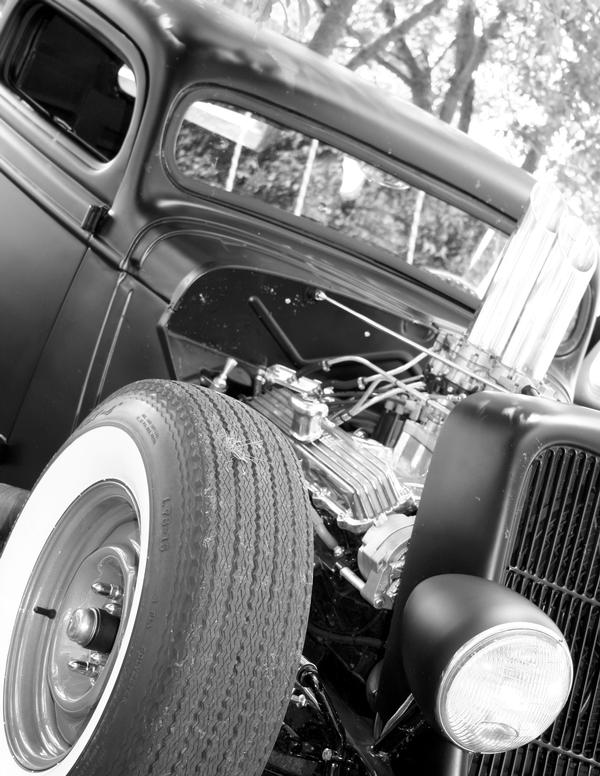 This story first published in the Calgary Herald June 13. While the Greaseball Bash is over, the Diablos Car Club in Calgary are still “pounding the rods,” to quote Jack Kerouac.

Welding torches. Cutoff saws. Grinders. Wrenches.
All tools of the trade for the hotrodders in Calgary’s Diablos Car Club.
And if you’re in the closed membership club, you better know how to use them.
“If you’re going to call it yours and drive it to a car show you should be able to say you built it,” says 35-year old Dwayne Dool, a Diablos founding member who is better known by his nickname Dooley.
The club is proof that hotrodding is not dead, especially amongst a younger generation — many of whom were born in the 1970s and 1980s. Taking the best of the hotrod and custom era of the 1950s and 1960s and adding their own twist to the mix, the Diablos are all about living a lifestyle and driving the cars they’ve created.
A group of 10 dedicated hardcore builders, the Diablos formed in 2001.
Members have their own cars that they’re customizing and modifying, and they’ll help each other out with tasks like chopping a roof or dropping in a motor.
“This is traditional hotrodding,” Dool says of the club.
While Calgary might be the central location of a few members, other Diablos live in Red Deer, Carstairs, Crossfield — and even Los Angeles.
A welder and mechanic, Dool works at Hot Rods Inc. in Airdrie. He sees firsthand the amount of money some are willing to pay for a cool car — anywhere between $80,000 and $500,000.
But Dool’s theory is if you do it yourself, you’re much better off, saving thousands of dollars. And the satisfaction of creating a ride with your own hands is incredible. In an age when many custom car parts are available from a catalog, the Diablos work hard to use only era-correct pieces and make as much of their own one-off items as possible.
To say their cars are unique is an understatement.
Dool’s own hotrod is a fenderless 1935 Ford truck. The project started when he dragged home a neglected 2 1 / 2 ton truck from the farm where it had sat for years. All he kept was the truck cab and the first 10 feet of the frame. He proceeded to chop the roof seven inches, and then lowered the cab over the chassis by channeling it eight inches. Dool created his own custom box at the back and dropped in a 455 cubic inch Oldsmobile engine. It’s got the coveted 1963 finned aluminum Buick front drums on 1940 Ford hubs.
“My truck, with all of the parts, comes in at about $32,000,” Dool says. And, of course, that’s not including his labour. But that’s kind of his point. Do it yourself — and save.
The Diablos will be showing off their cars, and those of others, on June14 when they host their fourth annual Greaseball Bash at the Bowness Sportsplex at 7904 43 Ave. N.W. According to the poster, the event is for pre-1964 rods, customs and bobber motorcycles. There is no entry fee and no registration fee.
Says Dool’s wife, Monika, of the show, “We’re trying to get away from the ‘old man’ car show where all of the cars are roped off and there are only men looking at them.
“The car show is purely for (our) love of old rods and the lifestyle that goes with it. You won’t see signs on any of these cars asking you not to touch or lean on them. There aren’t any of those creepy baby dolls leaning on the cars pretending to cry. The only dolls at this show are the ones walking around in heels!”
Vendors such as Plan B, Zombie Hut Design and Atomic Blonde will be there, together with Calgary bands including Big Foot Rocket Ship, Hurricane Felix and the Scorched Banditos.
“We’re trying to bring (the car culture) all together in one place,” Monika says. “And it’s also a kid friendly environment.”
The show runs tomorrow from 10 a.m. to dusk. Food is available on site. Check www.myspace.com/diabloscc for more information about the club and the Greaseball Bash.