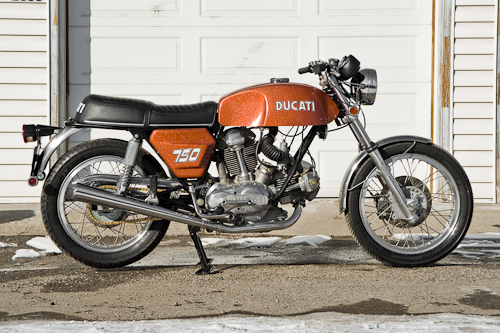 All photos are courtesy Amee Reehal. This story and photos first published in Inside Motorcycles, Issue 12/02

Some motorcycles represent the pinnacle of development, and mark a distinct moment in a brand’s history. For Ducati, such a seminal machine is the 750 GT.

From the end of the Second World War until the 1960s Ducati was famous for producing small bore, single cylinder motorcycles — including the Scrambler and Mach 1 models. But by the end of the 1960s the motorcycle world had introduced to a market hungry for displacement larger, multi-cylinder machinery. BSA/Triumph had their Rocket 3 and Trident (respectively) triple-cylinder motorcycles on the market in 1968, and Honda introduced its four-cylinder CB750 in 1969. To be competitive in the lucrative North American big-bore market Ducati needed something larger than a 450cc single.

And it came with a design from Ducati’s maestro, the famous Fabio Taglioni, or Dr. T as he is often called. He drew a new 750cc 90-degree V-twin with bevel-gear drive overhead cams. The wide angle between the cylinders gives the motor an ‘L’ appearance, and in the tube frame the engine becomes a stressed member. The front, or lower cylinder is almost horizontal, while the rear or top cylinder is in a near vertical plane. 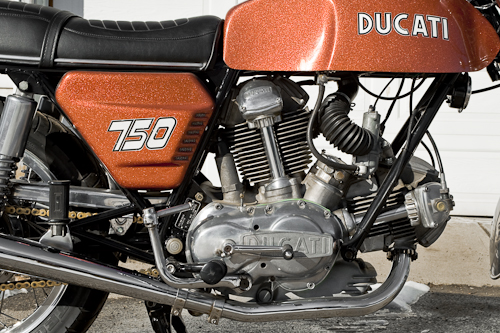 First introduced at the Olympia motorcycle show in London in 1971 the Ducati 750 GT immediately made a splash. It took a long time to fill orders, though, because the first 404 sand cast case motors were built entirely by hand. It took Ducati mechanics 40 hours to completely assemble a motor and set up the bevel-gear drive.

Fred Johansen was born in Holland and moved to Canada when he was just six. Johansen spent his formative years in Calgary, and has been obsessed with motorcycles from an early age. In the late 1960s when he was in grade 11 he bought a Suzuki 250 Hustler. His group of motorcycling friends was getting larger and more sophisticated machines as time progressed, and his friend Glen Parsons bought a 1972 Ducati 750 GT brand new from Fairview Cycle in Calgary for some $2,100.

“That Ducati was Glen’s daily rider and he treated it like any other piece of equipment, and it suffered a bit from lack of maintenance,” Johansen says. By 1978 there were some issues that needed to be addressed, and the motor was removed from the frame, the heads disassembled, and then put in boxes and stored in his mother’s basement. The rest of the rolling chassis was left exposed out in the backyard.

Johansen, a home renovator, eventually lost touch with his friend. “But one day, out of the blue, Glen called to ask if I was still doing construction,” Johansen says. “He wanted some work done on his mom’s house. While I was doing that work I discovered the rolling chassis of the Ducati. The funky metal flake gel coat Fiberglass gas tank had faded to silver on the top, and I said “We have to do something with this bike.” This was in the early 1990s, and the pair dragged the Ducati to Johansen’s then newly built three-car garage. Here, they each focused on their separate motorcycle projects. Johansen was rebuilding a 1972 Suzuki Water Buffalo at the time. 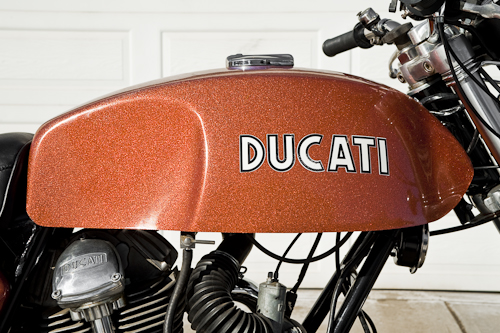 Work on the Ducati progressed slowly, and somewhat sporadically. Unfortunately, Parsons was diagnosed with MS in the late 1990s, and the Ducati project got put on the back burner. “He was feeling badly about leaving his bike behind in my garage and not dealing with it,” Johansen says. “I told him to just deal with what you have to deal with — the bike’s fine where it is.”

Just a few weeks later and Parsons had signed over ownership of the Ducati to Johansen. “‘Rather than waiting for this’, he said, ‘you might as well own it now,'” Johansen recalls. “Needless to say, that bike’s the only one in my stable that will go to the grave with me, I’ll never sell it.”

Turns out Johansen’s 1972 Ducati 750 GT was the sixth in Canada, and only the second in Alberta. The first 750 GT was built in June 1971, and Johansen’s was built on January 17, 1972. There were only 404 sand cast crankcase motors built, and Johansen’s machine was put together about three-quarters of the way through early production.

In February 1972 Ducati prepared eight 750cc race bikes to compete in the Imola 200 in Italy — an event where Ducati racers Paul Smart and Bruno Spaggiari placed first and second. Now, this win cemented Ducati’s place in the large-displacement motorcycle fraternity, and demand for the 750 GT increased exponentially. Ducati were forced to change their production methods as the company attempted to keep pace with demand, and the engine cases were no longer sand cast items. 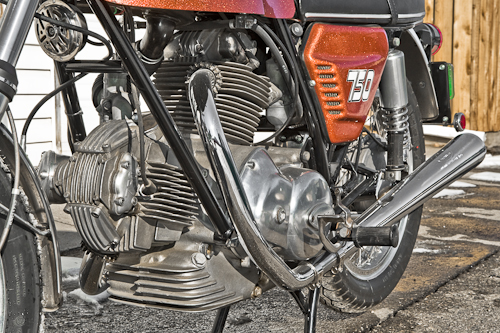 Soon after he took ownership of the Ducati Johansen began collecting the various parts he’d need to put the 750 GT back together. He acquired new pistons, rings, pins and gaskets, and a brake rebuild kit for the front Lockheed hydraulic disc. Johansen also purchased a set of the newly reproduced Conti mufflers as the originals had long since rotted away. While the orange Fiberglass gas tank had faded to silver, an experienced auto body man hand rubbed the finish and brought back the colour to about 85 per cent of its original sheen. He put two coats of clear over the tank, and that’s the way it sits — as close as possible to the original Ducati orange. The frame was restored with a fresh coat of paint. Wheels, which are flanged Borrani rims, were laced back together with stainless steel spokes and new Metzeler tires went on front and rear. 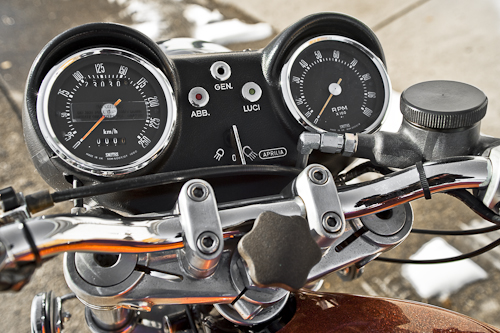 The push to get the 750 GT completely back together came when a local Ducati retailer wanted to borrow the bike when they launched the new Sport Classic Ducati series at a downtown art gallery. Johansen assembled the rolling chassis, and put the motor together loosely. He still has to pay some attention to the condition of the cams and followers, which are scored probably due to oil starvation, and he hopes to have the machine running again this year. “I’m not the least bit interested in interesting paperweights,” Johansen says of his motorcycles, a collection that includes Suzuki GT750s, rotary RE5s, and three more Ducatis. 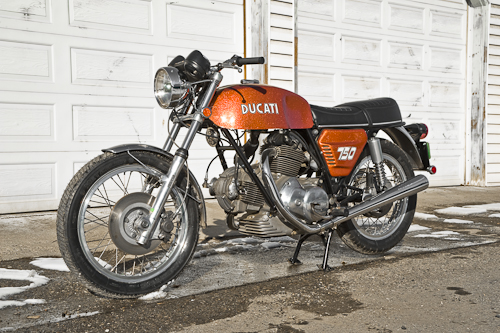