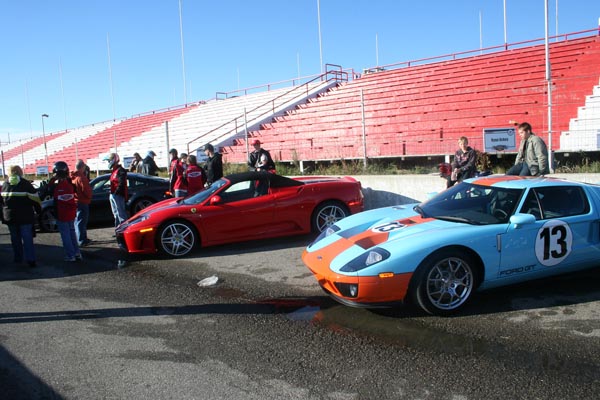 There’s something universally appealing about an exotic automobile.
The power, the design, the very sound of a machine such as an Aston Martin or a Bugatti transcends boundaries and connects at both a visceral and emotional level.
And the language of the automobile will be put to use tomorrow as the second annual Cardel Homes Ride of a Lifetime attempts to make a difference for a group of troubled teens.
Started in 2007 by brothers Damon and Ryan Ockey of Cardel Homes, the Ride of a Lifetime is supported by the Exotic Car Club of Calgary. Members of this club of local motorsport enthusiasts own vehicles ranging from BMWs to Ferraris and Lamborghinis and everything in between. They often rent the road course at Race City so members can enjoy their cars in a safe and controlled environment.
“We often like to bring friends who’ve never experienced a fast car out to the track,” explains Damon Ockey, 41. “It’s almost as much fun to see other people’s reaction to the cars than it is to drive them.
“We’ve had our friends out here and that’s great, but what about people who never get the chance to experience something like this?”
And that would be kids from troubled backgrounds.
Ride of a Lifetime puts teens in the passenger seat of a variety of exotic vehicles for a day of high-speed thrills and mentorship. Selected from three Calgary social agencies — Alberta Adolescent Recovery Centre, Big Brothers, Big Sisters Calgary and Hull Family and Child Services — 30 youth between the ages of 11 and 17 will get up close and personal with powerful performance cars.
“Who doesn’t love an (exotic) car?” says Ockey, Cardel’s director of marekting. “You may not know the specs or what it can do, but these cars are so unique and beautiful.
“And the kids get to experience these cars and get some mentoring at the same time. A lot of these guys in the club weren’t born with silver spoons in their mouths, they had to work hard to get where they are.”
Ockey says he’s always had a passion for exotic cars. He currently owns a 2007 Porsche 911 Turbo, and says the experience of driving a performance vehicle on a track is a feeling one does not soon forget.
“It’s infectious,” he says. A student of several performance driving schools himself, including the Allen Berg Racing School, Ockey says the members of the Exotic Car Club all have a great deal of track and performance driving experience.
“We go to Race City and put in lapping sessions, and once you’ve driven your car on the track you understand the true potential of your vehicle.”
This year, the kids will get T-shirts to commemorate their day at the track, and all participating drivers will get jackets. Drivers each pay a $200 fee to participate, and as Ockey points out, they are paying a lot more as they are burning through tires, clutches and fuel.
“We sent out an email to the club inviting drivers, and the next day we had 25 participants,” Ockey says of the group’s support of the event.
“A lot of the kids are really quiet, just because of the place they’ve come from,” Ockey says. “So we start off slow — it’s pretty freaky coming into turn one and slowing down from 220 to 100 (km/h). So we’ll talk to them about how they’re feeling, and just try to get them to open up at the same time if they will.”
On Sept. 13 at 9 a.m. everybody gets breakfast, and then lapping starts at 9:30 and runs until noon. According to Ockey, the public is welcome at the track during the Ride of a Lifetime.