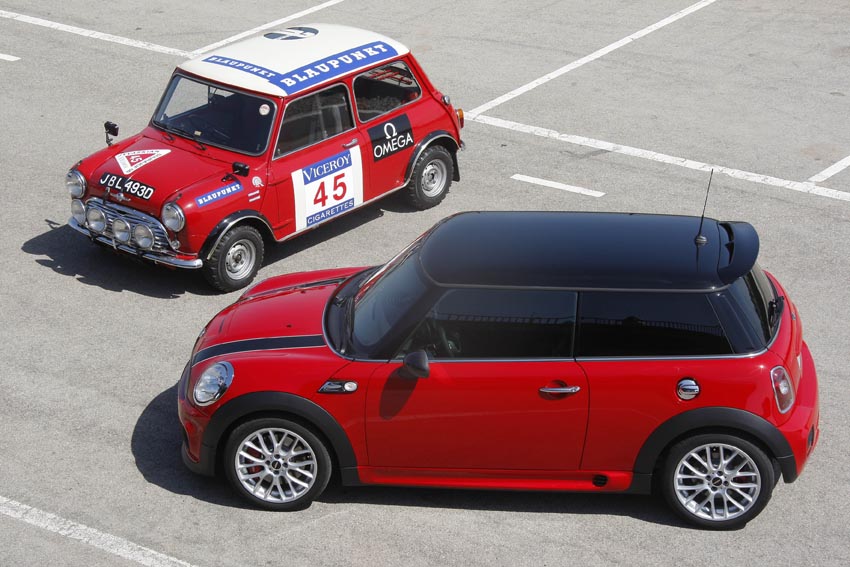 The mighty Mini turns 50 in 2009.
And with the car marking a special anniversary next year we thought we’d celebrate the Mini/MINI that has become a cultural icon. As a note, Mini refers to the original or classic car, while MINI denotes the BMW version.
Calgarian and Scottish ex-pat Malcolm Mann can attest to the allure of the Mini. He’s had a passion for the diminutive autos since he was 18 years old — and bought his first in 1967. Mann has raced them, tuned them, fixed them, and even built new ones.
Working from his Calgary repair shop — Auto Mann — he has imported new body shells from the UK and installed a mix of completely rebuilt parts from a donor car and new components to create the closest thing to a brand new traditional Mini he could get.
Now, he’s planning on building a Mini equipped with a modern Honda V-Tec engine.
“As a traditionalist, I appreciate the style of the classic Mini package,” Mann says. “But I also like to modify that a bit with 13″ wheels and fender flares.”
Sir Alec Issigonis designed the classic Mini in response to a British fuel crisis in the mid-1950s, and the car was meant to be as bare bones as possible.
Produced by the British Motor Corporation (BMC), under its Austin and Morris brands the Mini set a new standard in front wheel drive technology. Engine capacity started at 848cc, and grew as large as 1,275cc in some later cars.
The first Minis had external door hinges, sliding windows, a rubber suspension system and 10″ wheels. That minimalism was all part of the Mini’s less is more equation, and some would say a big part of the car’s charm.
Minis were popular with rally racing drivers, and the car won several prestigious events. It didn’t hurt to have someone like John Cooper, an enthusiastic racer and tuner, add some of his magic to the tiny Mini. He increased the engine’s power, and added disc brakes at the front. The Mini Cooper and Cooper S models proved very popular for both racers and the general public alike.
Mini built the car in a number of different models, and that included an extended wagon, van and even a truck. Over the years — the Mini was built from 1959 until 2000 — the car did evolve, and lost some of those original design cues such as the exposed hinges and sliding windows. But even at the very end of its production run the car would not have been considered a luxury automobile.

BMW’s MINI, however, was designed to be small yet refined. Unveiled in 2001 the MINI brought something different to the marketplace.

“The focus of BMW as a brand will always be to produce a premium product,” says Rob Dexter, product and technology specialist at BMW Canada. “And when BMW turned their attention to the MINI brand, there wasn’t really a compact car that could be called ‘premium’.

“There were a lot of premium cars, and there were a lot of compact cars, but there wasn’t a premium compact car.”
MINI was officially introduced to Canada in the spring of 2002. The MkI MINI was sold in two variants, the Cooper and the Cooper S. An inline four-cylinder 1.6-litre engine powered both cars, but the Cooper S featured a supercharger, and that extra boost raised the available horsepower from 115 to 163. A convertible MINI was added to the lineup in 2005.
MINI MkII cars came on the scene in 2007. These MINIs are fitted with a new 1.6-litre, DOHC four-cylinder engine; in the case of the Cooper and Cooper Classic a normally aspirated version while the Cooper S gets a twin scroll turbocharger.
In the spring of 2008 BMW introduced the MINI Clubman — an extended version of its three-door hatchback — also available in Cooper S trim.
Even more performance is packed into the Mini John Cooper Works versions of the new cars, and a tuned and turbocharged 1.6-L engine in the JCW car makes 208 h.p., compared to the 118 h.p. of the Mini Cooper and Cooper Classic.
BMW ended production of the convertible MINI in late June 2008, and according to MotoringFile.com, a MINI-fan website, there is a new soft top MINI on the way based on the updated MKII platform.
Even more recently MINI unveiled a Crossover Concept, a vehicle that, if it enters production, would see MINI design cues on a four-wheel drive, four-door semi-utility vehicle.
And, not content to stop there, MINI is going to produce 500 all-electric, rechargeable lithium-ion battery equipped cars. With a range of 240 kilometres and powered by a 150 kW (204 h.p.) electric motor, these MINIs are part of a pilot project and will be put to the test in three states: California, New York and New Jersey. The MINI E will debut at the Los Angeles Auto Show on November 19.
BMW’s Dexter is a big fan of the traditional Mini. He’s owned three of them, and refers to them — especially the Cooper and Cooper S models — as: “Cool little cars that go like stink.”
Calgary teacher Linda Soby has always driven a British car, from a Jaguar XK120 to an Austin Healy 3000, and MGAs and MGBs — one of which she still owns. But her fondest memories are of a pair of Minis — ‘Rose’ and ‘Tang’ — that she owned in the mid-1970s.
Her students at a certain Calgary school were apt to get up to mischief with her car, and she tells this story.
“I’d pack up my bags, and head toward the back parking lot, and would discover the car wasn’t where I’d left it,” Soby says. “The group of students who had picked it and up and carried it to a different location were always there to help me find it. They took great delight in my hysteria. Just part of the joys of driving a Mini.”
They couldn’t do that today with a BMW MINI. While a classic Mini weighs in the region of 668 kg, the new car tips the scales at 1155 kg, almost double the original weight. 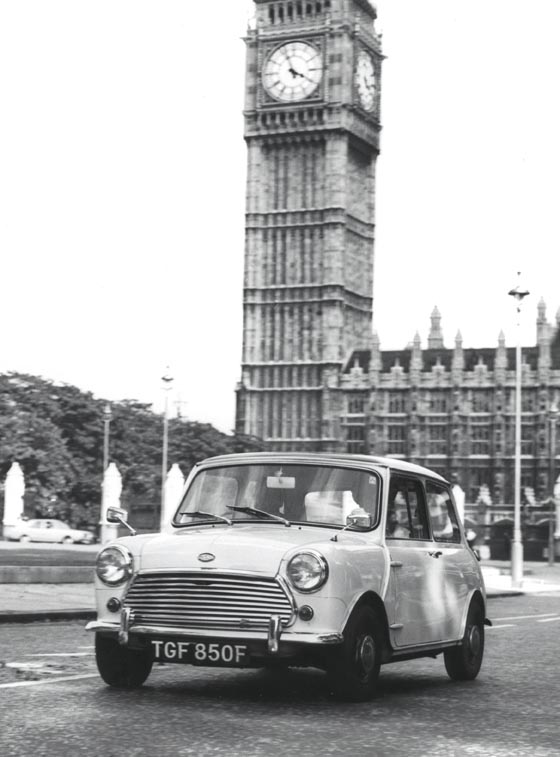 Dexter thinks BMWs MINI is a great car, and says: “There is the heritage of the Mini shape — the new car is still recognizable as a Mini — but just a bit bigger and better. The design cues are there with the speedo in the middle of the dash and the bucket seats up front and the bench rear seat.
“My first impression (of the new car) was ‘Wow’, I felt like I was sitting in a (classic) Mini, but the new MINI was improved in all the ways it needed to be.”
But BMW didn’t play up the original Mini when it began marketing their car. The company wanted to introduce the MINI as a whole new concept, and expected a young buyer with no recent memory of the classic Mini. As it turns out, the MINI’s buying demographic is all over the map. According to Dexter the gender bias is split 50/50, and the median buying age is mid-40s.
“I don’t think that’s what we originally planned for,” he says. “We initially targeted a younger group, and developed a cheeky and irreverent type of marketing approach.”
While Mann has driven a new MINI and enjoyed the experience, he doesn’t believe the new car hit the mark. So he’s planning on dropping a modern Honda V-tec engine into a 1968 Mini van he owns, and will use a Mini Tec mounting kit from MiniMania in California. He says one simply unbolts the front sub frame, installs the Mini Tec package, and bolts in a Honda engine from a donor car. It might be a bit more complicated than that, but that’s the rough idea.
“You’ve the got the cuteness or beauty, if you will, and the handling of the original Mini with a great reliable motor, the power of which will just blow you away. I’ve driven one, and it felt like motorcycle-like acceleration; it’s fast,” he says.
Whether you knew the car in its earliest days as the Austin Mini, he Morris Mini-Minor, or later the Mini, or MINI; over the years the little car has and continues to endear itself to millions. 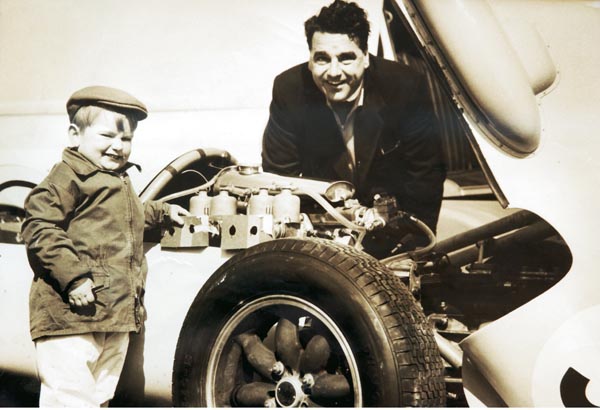 John Cooper’s Influence on the Little Car
Would the Mini have become so popular without the help of racecar builder John Cooper?
After all, it was Cooper who helped the tiny Mini gain worldwide recognition when the car won the 1964 Monte Carlo Rally.
Ironically, Sir Alec Issigonis — the Mini’s designer –was initially cool to the idea of Cooper tuning the car and entering races. Cooper had long been involved with Formula Junior racing cars, and used modified Morris engines to power his creations. His opinion on power and how to make it was respected, so when Issigonis first started sketching the Mini he involved Cooper, and the two men talked engines.
As the Mini became a reality, Cooper got his hands on one and entered it in the 1959 Grand Prix in Monza. He wanted a car to beat the Lotus Elite, and had already tried with a Renault Daphine. The entire 1959 race turned into a battle with Reg Parnell and his Aston Martin DB4 — and Cooper’s Mini turned out to be an hour faster than Parnell’s DB4.
Convinced he was on to something, he talked to Issigonis about developing a GT car with the Mini. Issigonis balked, and according to one source it was because he saw the car as a ‘people’s car for everybody.’ So Cooper went straight to the British Motor Corporation where his idea was warranted to have merit, and the company built 1.000 Mini Coopers to his specifications, which included a stroked and de-bored 997cc engine fitted with double carburetors, modified gear ratios, and a pair of 7″ Lockheed disc brakes up front to help stop the car.
Enthusiasts snapped up the hot cars and a string of motorsport wins ensured BMC remained interested in Cooper’s work, and Issigonis also changed his mind and got involved. Together, the two men created the Cooper S, with an even more powerful 1,071cc engine and bigger brakes.
The Mini Cooper and Cooper S cars were built from 1961 to 1971, and then again from 1990 to 2000 when the Rover Group owned the Mini brand.
When the BMW MINI became a reality in 2001 there couldn’t be any doubt that there would be Cooper and Cooper S badges on the car.
In 2000 John Cooper created the John Cooper Works company to produce parts and pieces for the new MINI. Cooper died shortly after setting up JCW, and the reins were handed to his son Michael. In 2007 BMW bought the JCW brand. 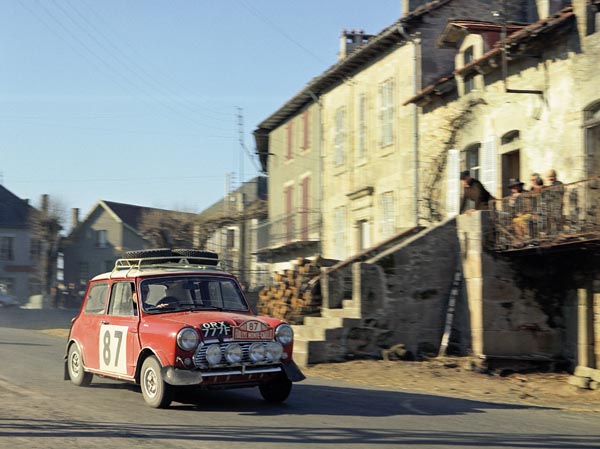