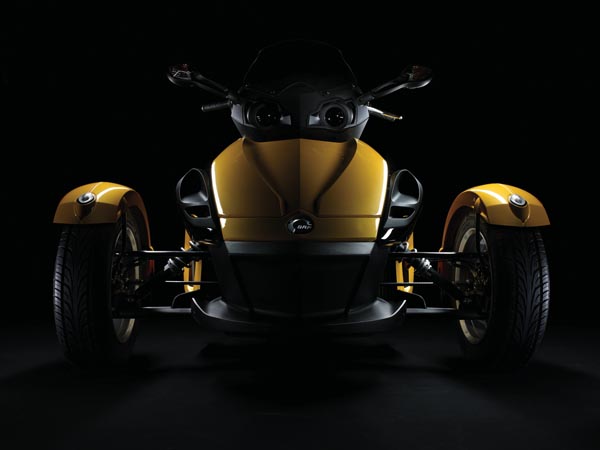 Can-Am’s new Spyder Roadster is revolutionary and evolutionary.
The three-wheeler is revolutionary because nothing like it has been mass-produced, and this machine should bring a whole new breed of rider to the open road. It’s evolutionary in the sense that the Spyder can trace its DNA to other Bombardier products such as Ski-Doo and Sea-Doo.
And that’s exactly what Can-Am planned.
According to Philippe Normand, marketing manager for Can-Am Spyder, the initial idea for the Spyder was hatched 10 years ago.
“Ski-Doo was in the snow, Sea-Doo was in the water, and Can-Am (ATVs) were in the dirt,” Normand says. “We needed to be on the road, that’s where the biggest market is.”
And to get Can-Am on the road Bombardier Recreational Products (BRP is Can-Am’s parent company) set a number of vehicle design requirements. Whatever was drawn and ultimately created had to offer performance, and peace of mind — just like BRP’s sleds, watercraft and ATVs. The company didn’t have to look far. Drawing from their sleds (two skis out front and a single track out back), their watercraft (seating position, bodywork) and their ATVs (ease of use), the company came up with the Spyder Roadster.
The Spyder is definitely unique. There are two 14×5″ car-sized wheels up front, and a single large 15×7″ wheel out back. The front wheels ride on double A-arm suspension, while the rear wheel is mounted in a swingarm with a monoshock. Those suspension components connect to a SST (Surrounding Spar Technology) frame. The frame is made of steel, and a backbone and a belly beam wrap around the V-twin engine that sits just aft of the front wheels. BRP’s Rotax 998 c.c. V-twin engine produces 106 horsepower, and that’s transmitted to the rear wheel through either a manual five-speed gearbox, or an automatic five-speed. Final drive is via belt. 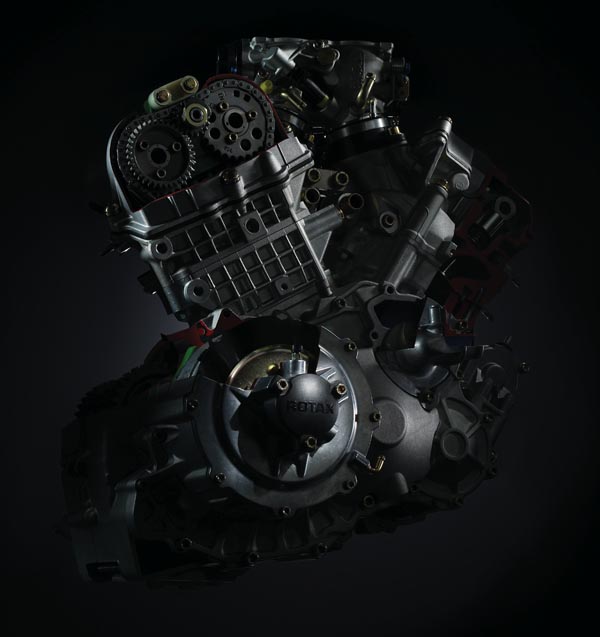 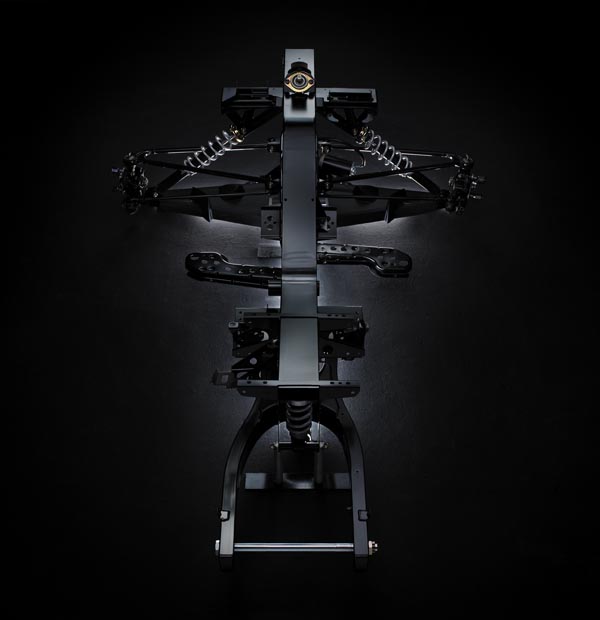 But what’s it like to ride?
That’s what Calgarian Paul Frenette, 52, wanted to know. He asked the Herald about getting on board a Spyder for a People’s Test Ride, and we managed to get him a few hours in the saddle. He rode the machine into Kananaskis Country, trying out a variety of roads in perfect riding weather.
“It’s very, very fast and powerful,” Frenette says. “Its acceleration is incredible — it pushes your eyeballs to the back of your head. It could get away quick on you, and like any motorcycle it demands your respect.”
But with its two wheels forward architecture the Spyder is inherently stable, and Can-Am has outfitted the vehicle with numerous electronic control units connected to systems designed to keep all three wheels on the pavement. It has, for example, Electronic Brake Distribution, Anti-lock Braking System, Vehicle Stability System, Traction Control System, Stability Control System with Roll Over Mitigation and Dynamic Power Steering. 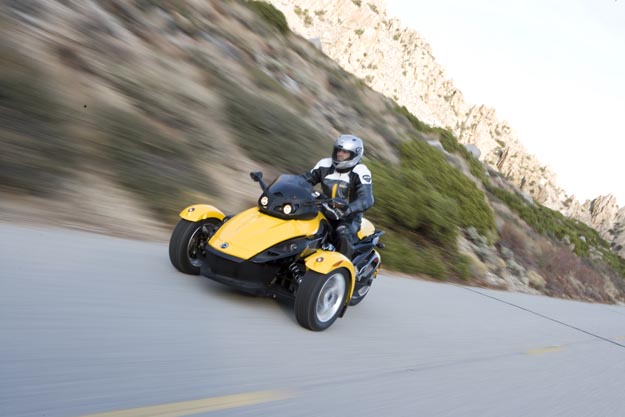 Frenette has held his motorcycle licence since he was 14 years old. He bought a Honda CT70 brand new for $428 in his home province of New Brunswick, and for the most part ever since he hasn’t been without a two-wheeler. He enjoys touring aboard a motorcycle, and has owned Honda Gold Wings and CB1000s. His last ride was a Honda ST1100, and he is currently looking at a Honda ST1300.
His style of riding is 1,400-plus kilometre days, logging 12 to 14 hours at a time.
“The whole idea of a motorcycle is the freedom to lean into corners and not have a lot of bulk around you,” Frenette says of his motorcycling passion.
Here’s what Frenette thought of the Spyder on the road.
“It’s extremely easy to manoeuvre, with variable power assisted steering. The result is a ‘motorcycle’ that you steer (vs. lean) into corners. You can slide your weight (centre of gravity) and help the cornering process if you wish but it’s not required,” he says.
“Straight line stability in my 100 kilometre drive to Kananaskis Country showed me the Spyder is extremely stable at any speed and the ride is amazingly settled and smooth. Bumps are easily absorbed and do not deflect the bike from its path. Side winds don’t affect its track at all.”
Frenette says the three car-size tires put a sizable contact patch on the road, and he quickly grew comfortable with the width of the two front wheels (1,308 mm).
“It doesn’t seem as big when you’re driving it, and a reverse gear means easy manoeuvring out of tight spaces, too,” he says.
He says the machine looks modern and oh-so very 21 st century with its unique stance, colours (it comes in silver; yellow and red are optional), and its swooping and aerodynamic bodywork. Frenette says the saddle was extremely comfortable, and everything fell to hand. The handlebars are set up much like a motorcycle, with the notable exception that there is no front brake lever on the right hand side. On the manual Spyder a hand clutch/foot shift arrangement is on the left, and a right foot pedal operates front and rear disc brakes.
But what Frenette wasn’t prepared to give up was the freedom to lean into a corner. For him, that’s the whole motorcycling experience, and he doesn’t think the Spyder will displace the traditional motorcycle.
However, he says Can-Am has opened up a whole new niche, one that will allow people with limited ability or a fear of two wheels to get out and enjoy the ‘essence’ of motorcycling.
“There’s a charisma to a bike and its power, and it comes down to the fresh air smell as you travel through the countryside in a different realm. You’re seeing (the road from a different perspective) and you’re smelling the road,” Frenette says.
And that’s what Can-Am hoped to capture. Can-Am’s Normand says: “We think the Spyder will democratize the open road. It offers the open-air concept of a motorcycle, with the peace of mind of a sports car and stability at rest.
“(The car and motorcycle industry) is a mature market with brands that are solid,” Normand says. “We wanted to build something unique, and completely different, and make a name for ourselves.” 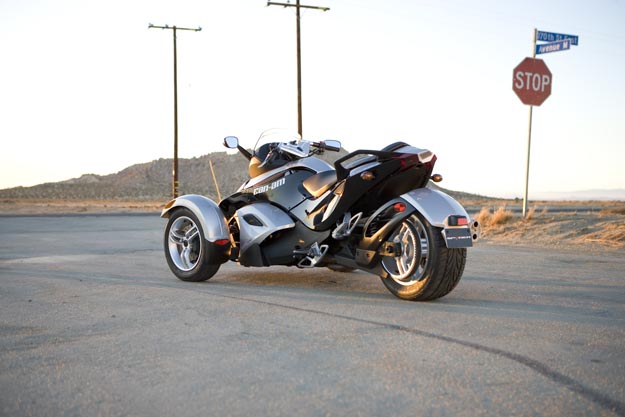 PAUL FRENETTE’S RIDING JOURNAL
-After 38 years of motorcycling experience I thought I had seen it all in the two-wheeled industry — and then along comes a Spyder, a three-wheeled motorcycle like nothing else on the roads today!
-The Spyder is a trike with the single rear drive wheel (belt drive) and two steering wheels up front. You may have seen motorcycle trikes on the road, with two wheels at the rear driving and the front regular steering wheel, but these units are mostly custom built and much more costly than the Spyder.
-With the low windshield height, I found 95 km/h to be the ‘groove’ or comfort zone of the Spyder, and I’m sure fuel economy was excellent at that speed. Besides it allows you to enjoy the scenery more too. Vibration on the handlebars was always present, and at higher speeds (120 km/h) the tiny rear view mirrors were showing you only fuzzy shapes. The angle of the rear view mirrors needs to be increased as my view was mostly blocked by my arms if I wanted to see what was directly behind me.
-At highway speeds, the bulk of the wind blast goes over the top of your helmet and a smaller blast hits you on the chest, nice on a warm day but it could be a problem in colder weather. In (the) city and short trips, the wind is bearable but a long trip would cause me to look for a much taller aftermarket windshield.
-Heat pouring off the engine wasn’t a problem that I feared it could be, with adequate venting away from the riders legs. Interestingly, lawyers have shown up on the design of the bike to inject their collective ‘wisdom’, with a partially hidden single function override button needing to be pressed whenever you start the bike to acknowledge you have read the safety warnings in a pull out tab above the instrument cluster that contains all the warning labels and more. Otherwise warning labels would adorn the bike and it would look terrible so this is a small consolation to press the button every time you start your Spyder.
-The bike features a front locking ‘trunk’ large enough for the storage of a single helmet or a week’s worth of carefully packed luggage for the driver.
-Rotax builds magnificent motors and this one is the true heart of the bike! 106 horsepower out of 1.0-litre and the locomotive-type endless power pulls you along in almost any gear. Passing is a breeze and fearless! After having ridden many 2, 4 and 6 cylinder bikes, this twin is unlike any previous twin I have ridden, a most impressive powerplant.
-So would I plunk down $18,500 plus tax for the Spyder? I’m not sure at this time –I hear they are working on a touring model and if it addresses the vibration in the handlebars and the wind blast, I may consider one. But I do enjoy the freedom to lean into corners on a ‘regular’ motorcycle, done almost by instinct with little input required vs. the need to push/pull the handlebars to steer the Spyder (and thus requiring constant attention).
-I believe the true ‘grand slam’ of this recreational product is the fact that it will attract many more people to motorcycling, including people with limited or reduced mobility (especially with the anticipated automatic model).
-Ride safely!

ON IT FOR THE LONG HAUL
Calgary high school teacher Debbie Noesgaard has been riding a motorcycle for almost a decade. Her machine of choice (prior to the Can-Am Spyder) was a 1995 Triumph Thunderbird 900. Her Triumph now sits forlornly in the garage since she took delivery of her yellow 2008 Can-Am Spyder from Bow Cycle in April this year. She’s logged 2,300 km so far.

Q: Why the Can-Am Spyder?
A: I took one on the Awareness Ride last year (2007), and was able to take one out again in June over the Highwood Pass. I knew then I wanted one. It handled beautifully in the city, and beautifully on the highway. There was some bad weather with hail and pooling water in the Pass, and on the Triumph I would have been nervous. But on the Spyder, I was fine.

Q: What’s your opinion of the ride?
A: It’s a different ride but it’s an active ride — it’s like riding a Sea-Doo or a snow machine, only on pavement. And I really like that feel, you still need to lean, but you shift your weight differently on this than you do on a bike. The steering feels quite a bit different, and you might think you need quite a bit of upper body strength to handle it, but it’s not too bad. There is quite a windblast with the low windshield — in the city you don’t notice it but on the highway at speed you feel it — you’ll want a full-face helmet.

Q: How does the public react to the machine?
A: I belong to the SpokesSisters (a local all-female motorcycle group dedicated to raising awareness about and funds for breast cancer) and we took a run up to Jasper. A lot of the girls have brand new Harley-Davidsons, but just about any time we stopped the first bike anybody came up to was mine. That was fun; I like the novelty of it. I’ve been commuting to school on it because I can carry all my stuff, and when I first took it to school a student came up to me and said “I’m totally going to have to change my opinion of who you are.” I think that was one of the funniest comments I’ve heard.