published May 25 in the Calgary Herald’s Driving section 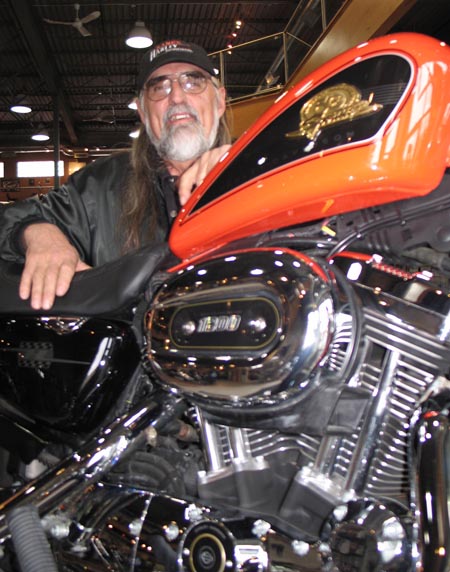 Mick Cawthorn of Kane’s Harley-Davidson with the 50th Anniversary Sportster — both his company and the venerable Sportster share a birthday.

Not many companies can lay claim to having been in business in Calgary for 50 years.
But on May 24, Kane’s Harley-Davidson in historic Inglewood reached that milestone and the ensuing birthday party carries on through the weekend. Festivities include Sunday’s running of the 16th annual Motorcycle Awareness Ride/Walt Healy and Bob Kane Memorial Ride in support of the Universal Rehabilitation Service Agency (URSA).
“Very few businesses in Calgary make it to 50 years, and very few motorcycle shops in North America make it to 50 years,” says Kane’s owner and long-time motorcycle enthusiast Mick Cawthorn.
The history of Harley-Davidson in Calgary does go back to 1919. But Bob Kane Sr., a Lethbridge dairy farmer, came to Calgary and established Kane’s Motorcycle Shop in 1957. At one time, Kane used to deliver milk in the Lethbridge area using an old Harley-Davidson and sidecar outfit.
In its history, Kane’s has sold motorcycles from just about every manufacturer, and was the first Honda dealership in Canada. For the last 24 years, the company has sold Harley-Davidson machines exclusively.
Cawhtorn had worked with Kane since the early 1970s, and he purchased a controlling interest in the company in the late 1970s. He hasn’t looked back since. With the rise in popularity of the Milwaukee-made Harley-Davidson machines Kane’s has grown, but Cawthorn has never looked to expand or move beyond his Inglewood location.
“We’re 50 years old this year, and our birthday is the same as the Sportster,” Cawthorn says. The first Harley-Davidson Sportster XL was also introduced in 1957.
To celebrate the 50 years, Harley-Davidson motorcycle demo-rides start today at 10 a.m. An informal meet and greet and barbeque complete with entertainment gets underway at 4 p.m. at Kane’s.
On Saturday a motorcycle and hot rod show and shine takes place on 11 Street, in front of Kane’s shop. “We want hot rods, new bikes, old bikes, basically anything that’s unique, all makes and models,” Cawthorn says. Spectators are welcome.
And on Sunday the motorcycle awareness ride/Walt Healy and Bob Kane memorial ride takes place. Registration at the Deerfoot Outlet Mall begins at 10 a.m., and closes at noon. A 110 kilometre ride to Symon’s Valley Ranch for a barbeque lunch departs at noon. There is a $30 fee per rider and a $30 fee per passenger, and all funds raised benefit URSA and their support of those living with a brain injury. Call 272-7722 or visit www.motorcycleawarenessride.com.
“The ride, again, is for all makes and all models of motorcycles,” Cawthorn says. “It’s about bikes being on the road, and we need to make the public aware that we’re here.”
That said, I’ll never forget once talking to the driver of a Ford Aerostar minivan after he’d been stuck in traffic waiting for the motorcycle awareness ride parade to pass.
“Next year,” he said, “I’m going to organize a Ford Aerostar minivan awareness drive.”
We know the minivans are on the road, but how closely do we watch for motorcyclists? 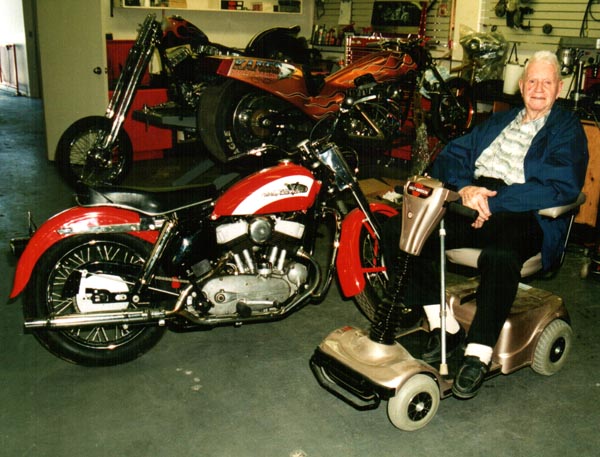 Bob Kane, Sr. I think I took this photo, and the one below, sometime in 2000. Kane is the name behind Kane’s Harley-Davidson.