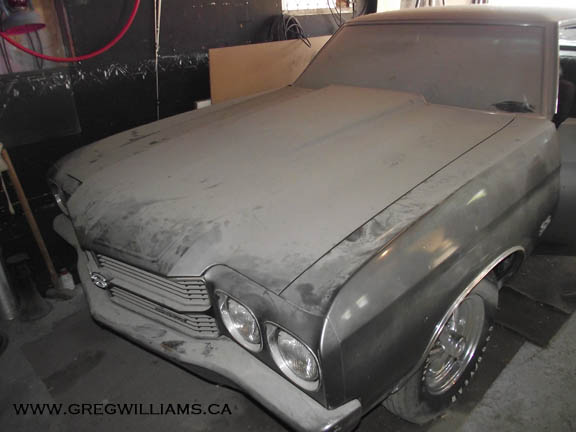 Car collectors know hidden gems are out there.

Tucked in garages, dusty and forgotten, tires flat, engine likely stuck, sits a sought after vintage vehicle. All one has to do is smoke them out.

In autumn 2012 Don Pettit, general sales manager at Woody’s RV in Calgary, struck up a conversation with service writer Lynn Kiddie. Pouring a coffee, the last thing he was thinking about was locating an old car.

“We were up in the lunchroom, and Lynn asked me what my plans were for the weekend,” Pettit recalls. “I told her I was planning on working on my old cars.”

“She said her (common-law) husband had an old car sitting in his mother’s garage, and that he bought it brand new when he was a younger man,” Pettit says. “That got my attention, and when I asked what kind of car it was she said it was a Chevelle.”

Pettit’s interest really piqued when Kiddie told him the car had two big black racing stripes on the hood and trunk lid.

“I knew if those stripes were original to the car, then the Chevelle was an SS model,” Pettit says.

Pettit began asking questions. Did it have a 396 or a 454 cubic inch engine, was it manual or automatic? Kiddie didn’t know, but that evening at home she talked to partner Ray McKay about the car. She wrote down the information, relaying it to Pettit the next day. The car was a 1970 Chevelle SS 454 LS5, with a column shift automatic transmission and a bench front seat.

It wasn’t until a couple of months later at the Woody’s RV Christmas party that Pettit and McKay met. As the two discussed their backgrounds – both are born and raised Calgarians, and both were avid speed enthusiasts in their younger days – it became apparent they shared common interests. However, McKay told Pettit he wasn’t thinking of selling the car.

“I told Don that I was going to put it back on the road, but never got around to it,” McKay says. “Don said he’d get it back into shape if I’d sell it to him.

“The more we talked, the more I figured that if I ever was going to sell the car then he would be the gentleman I’d want to sell it to.”

In 1965 McKay was living in the family home on Scotsman’s Hill when he got a job at Safeway. He was 16, and his mother, Tina, told him if he was working, he was ready to start paying rent.

During high school McKay was fooling around with a pair of 1957 Chevys, tuning and racing them. But his mother was tired of him always working on the cars, and in early 1970, when he was 21, she told him to go buy a new car.

McKay went to Jack Carter and looked at the 10 or 12 Chevelles they had on the lot. He also went to GSL, but the only Chevelle they had was equipped with a 396, and McKay really wanted a 454 c.i. engine. 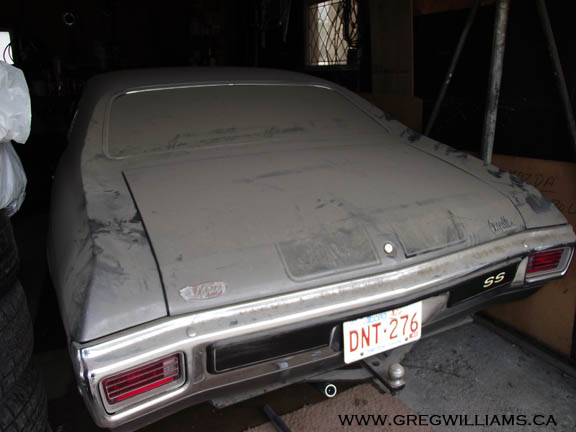 “I went back to Carter’s, and in the showroom I bumped into a fellow I’d gone to school with,” McKay says. “He was selling cars, and we went for a test drive in one of the Chevelles. We drove it up to the house, and I showed it to my mom – she said I could do what I wanted with the money, and we went back to Jack Carters and signed the papers.”

McKay’s Chevelle is a rare car, one of only 20 454 c.i. LS5s built by GM with the bench seat and column shift, and without power steering, tachometer or air conditioning. McKay paid $3,900 ‘and change’ and says he, “Promptly drove the car the way it was meant to be driven. I had to put new rear tires on it three days after I bought it.

“I didn’t treat it gently, and we went out to Shephard Raceway where Gene McMahon allowed us to bracket race. A group of us formed the Calgary Street Racers Club, and I would drive the Chevelle to the track, race it, and drive the car the rest of the week back and forth to work.”

McKay modified the Chevelle with a Holley carburetor, headers, shift kit, dual point distributor and racing gears in the rear end, and the racing lasted all of 1971 and 1972. His best run down the quarter mile was 13.5 seconds with a speed of 102 mph.

In 1977 McKay joined the Calgary Fire Department, and he and several other firefighters spent much time at Mara Lake in B.C. with their powerboats, and in McKay’s case, his 1974 GMC van. And the Chevelle, which he last drove in 1985, was tucked away in his mom’s garage. The next thing McKay knew, more than 25 years had passed.

Many others had offered to buy the car, and McKay’s response was always a flat-out no. But when Pettit entered the picture, McKay reflected on just what he was ever going to do with the car.

“I talked to my mom, who’s 91 now and in assisted living in Okotoks, and she said if you’re not going to do anything with it, and someone else will, follow your heart and do what you think is best,” McKay says.

With tears in their eyes, Pettit and McKay shook hands on May 16, 2013, and with help from Bill Knecht the dusty car rolled into the light on May 21.

Now, with the Chevelle in his garage, Pettit says he plans to put the car back the way it left the factory; McKay saved all of the original components he’d removed.

And, Pettit says McKay will be included in every step of the car’s resurrection. But one thing Pettit will never do is paint the Chevelle — he knows that a good portion of the car’s value is in its originality.

The car will get driven — on the bill of sale Pettit signed, it’s stipulated when the Chevelle is roadworthy, McKay gets to borrow the keys. 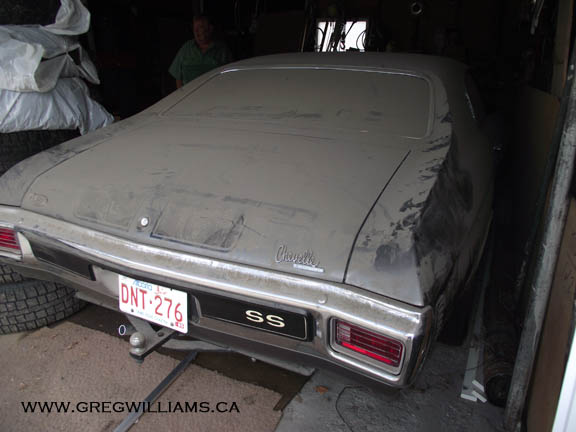