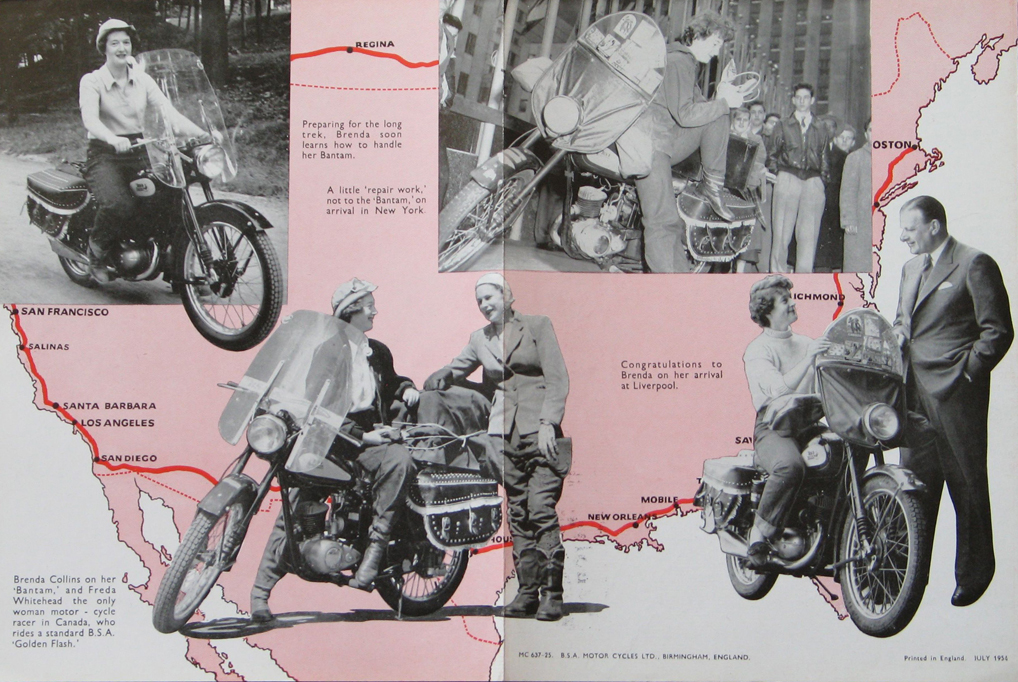 The young traveler had no previous motorcycle experience before taking delivery of her Bantam from Arlington Cycle & Sports Ltd., B.S.A. distributors in Montreal, Canada.

Quoted from the brochure, “…Collins, a young journalist from Kent, with a taste for adventure, was working in Montreal, and felt she would like to see more of Canada and the United States – as economically as possible! At a motor-cycle show she saw a B.S.A. 125 c.c. ‘Bantam’ and immediately decided that this was the ideal method of transport for her trip across the wide open spaces – but for one snag – she couldn’t ride.

“However, learning to ride a ‘Bantam’ is so easy and Brenda soon mastered it…”

Collins’ Bantam, one of two models available in 1953, was the 125cc Two-Stroke Model D1 with a plunger spring frame. There was also a D1 with a rigid frame.

The machine was based on the same German DKW RT125 design from the ‘30s that was the starting point for Harley-Davidson’s late-‘40s S125, later known as the Hummer. Both companies, along with Russia’s MMZ, were given rights to produce the little two-stroke design as part of war reparations following World War II.

B.S.A.’s Bantam had a 123cc single-cylinder motor with a three-speed, unit construction gearbox. The fuel tank carried 13/4 gallons of gasoline and oil mix, brakes were 5” in diameter, and the Bantam had a dry weight of 183 pounds.

Leaving Montreal in August 1953, equipped with 100 lbs. of gear, including a portable typewriter, Collins headed west across Canada. She toured through Winnipeg, Manitoba; Regina, Saskatchewan; Calgary and Banff, Alberta; before crossing the Rocky Mountains to Vancouver, British Columbia. From Canada’s west coast, she rode down to San Francisco, Los Angeles and San Diego before traveling east to Tucson, Arizona; Houston; New Orleans and Jacksonville, Florida. Northward she stopped in Savannah, Georgia; Raleigh, North Carolina; Washington, DC; and New York, where she arrived in April 1954.

Says the brochure, “En route through Canada she took temporary jobs to supplement her $2 a day budget, wrote up her experiences for several magazines and papers and appeared on various radio programmes.

“In a test that would punish many a bigger motor-cycle the ‘Bantam’ gave her reliable and economical service under all the varied conditions she encountered on her trip.”

Collins’ actual saddle time on the Bantam was 90 days, and her average speed was 35 to 40 miles per hour. But that modest pace was enough to add up to more than 10,000 miles by the time she was through.