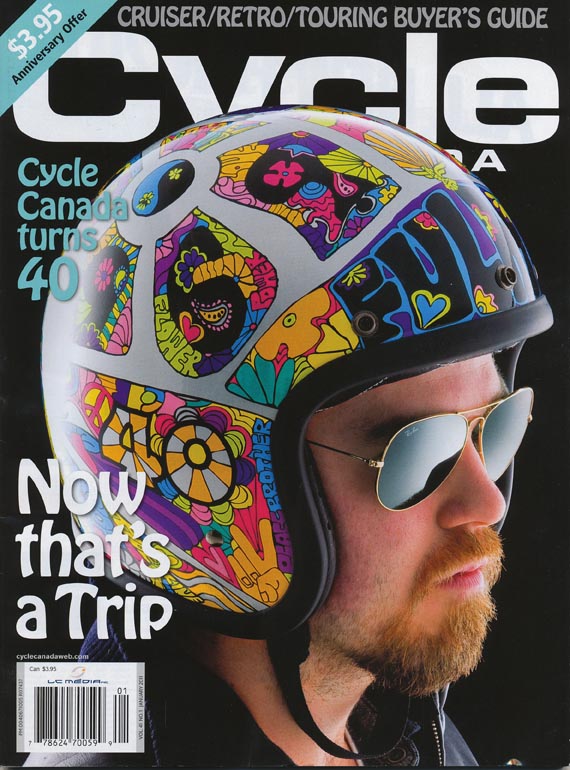 Writing the vintage column, New Old Stock, for Cycle Canada gives me an opportunity to delve into a number of different subjects.

My first piece ran in the January 2011 issue, and that was an introductory column. I simply offered up some background about myself, and how, at the age of nine, I got a Clinton-powered minibike. I have  been interested in motorcycles ever since.

But punk music (Husker Du, D.O.A. and SNFU) and skateboards took up much of my teenage years. Until I visited a fried who lived in Saskatoon. His dad had a garage full of machines, mostly Harley-Davidsons. I was drawn to the lone Triumph Bonneville, though, and this rekindled my interest in motorcycles. I had to have a British motorcycle. I schlepped dishes and earned enough to buy a 1971 Triumph TR6R, and used the machine to commute to work and to college. Since then, just about anything with two wheels and an engine has been of interest.

In the February 2011 issue of Cycle Canada I interviewed Mark Burnett of Burlen Fuel Systems in the UK, makers of SU and Amal carburetors. It’s encouraging to know that there’s enough of an old bike market out there for a company to reproduce classic instrument designs. Burnett said to me: “Given the current climate sales are encouraging. The market seems buoyant, however questions have to be raised as to the sustainability given the aging ownership. Our research shows a recent increase of younger owners/riders turning to classics – perhaps owning more modern machinery alongside. Globally, the classic bike market is still quite large and although fewer and fewer, old machines are still appearing in the back of dusty barns ripe for recomissioning. Who knows what is around the corner?” 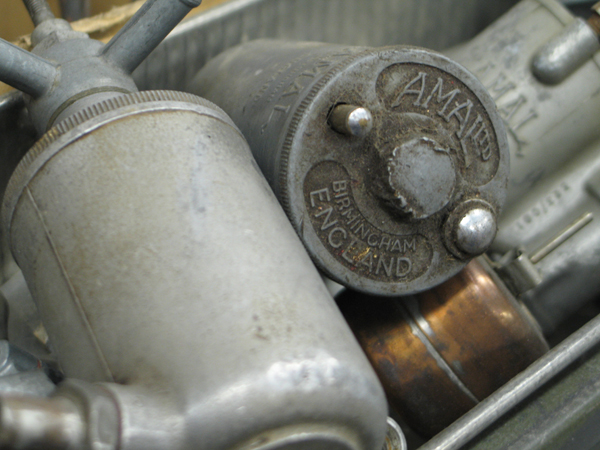 And most recently, in the March 2011 issue I’ve interviewed vintage motorcycle illustrator Dermot Walshe. A fascinating creative talent is Walshe. We talked about the rapid pace of technology, and about speed. Walshe recommended reading The Vertigo Years by Phillip Blom. This book takes a detailed look at the years 1900 to 1914 and how quickly and severely society was shifting — from sexual mores to a fascination with speed. Good stuff.

Perhaps one of the most interesting/frightening sections in The Vertigo Years is Chapter 5: 1904 where Blom discusses Belgium’s King Leopold II and his systemic exploitation and mutilation of the Congo populace in his quest for rubber. And that thirst for rubber, according to Blom, was thanks to John Dunlop’s invention in 1884 of the pneumatic bicycle tire tube. Blom wrote: “Fitted with miraculously shock-absorbent rubber tyres, bicycles became a cultural phenomenon, a symbol for the young generation and its time, for speed, freedom and physical fitness.” Definitely a recommended read.

About himself and his own motorcycling career, Walshe said: “Certainly Vintage racing between 1989 and 1995 was a lot of fun…..some fast laps on Mosport and  drafting at Daytona in 1995 are high on the list……as well as touring Indonesia a bit on my scooter in 1993. The same year I was also loaned a bike in Japan on a job there and tried hard not to lose the view of my buddy’s helmet as he split lanes in  the congested turmoil of downtown Tokyo. I lost count of how many machines I bought, sold, rode or destroyed; probably over 50 including an 850 Norton commando , an 860GT Ducati….the 1950 Goldstar 500 and a BMW 1000 but the most fun to ride were the small ones. My SRX 600 was like a street Manx and was awesome around Mosport…..sliding 2 wheels and catching a freakishly good drive out of turn one and two on the CB 350 racer counts right up there too!
I love the vintage bikes for their sound and lively feedback……rode a GSXR1000 but the smooth hyperspace sensations don’t quite capture the romantic spirit of the iconic machine for me…….they’re more like 2-wheeled Jet-Skis but to each his/her own.
And, I don’t have any tattoos.
Best advice from a friend or mentor: Peter Sheppard ( North Bay ) ” you just have to ride your own race”.”

Pick up the March issue of Cycle Canada to read the column. 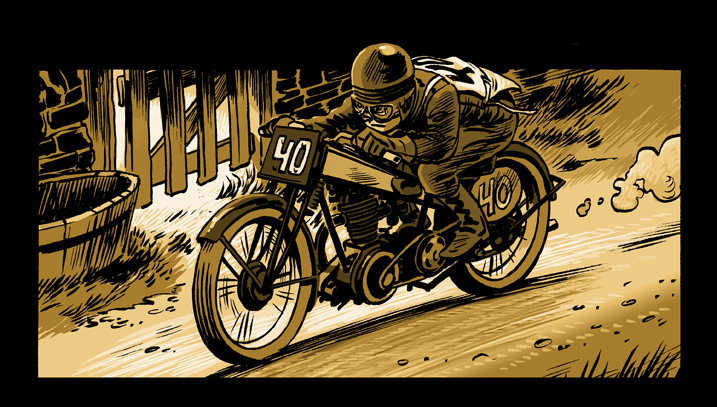 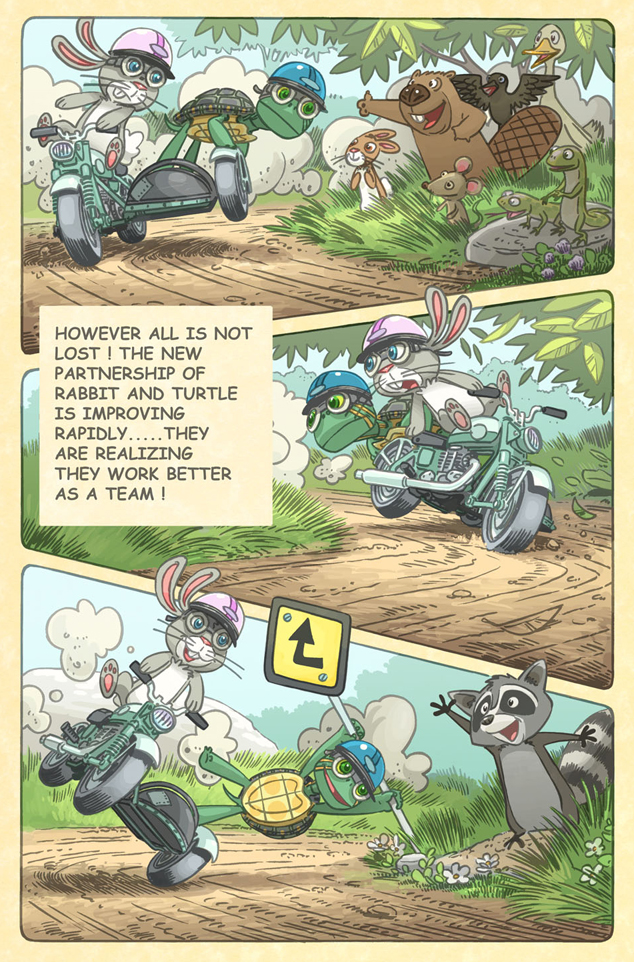 And something else Walshe has drawn is an illustrated update on the old Tortoise and the Hare tale — this one featuring a frog who has all of the latest and greatest technology, including a racecar. He challenges Tortoise and Hare to a race, and the pair have to work together and learn to ride an outfit. Looks like fun reading.