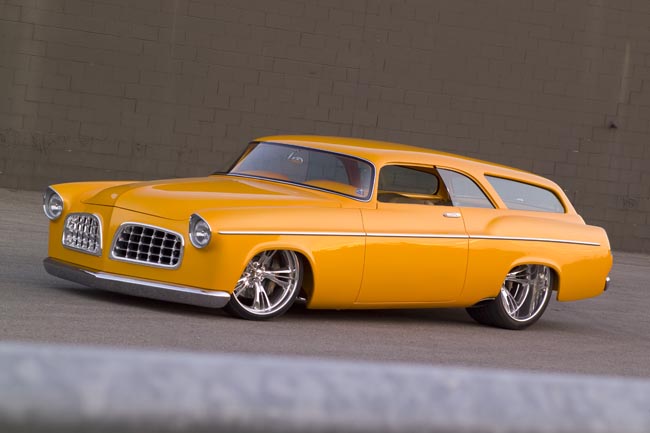 Creating an award-winning custom vehicle takes artistic vision and many skills.
Sparks fly as a builder sculpts with grinder and welder, taking a car or truck and completely reshaping metal, making changes the original automaker never envisioned.
While there are many talented builders working in the custom car industry, one of the most creative is B.C.’s J.F. Launier of JF Kustoms.
Launier and his team just brought home the World’s Most Beautiful Custom award, presented Feb. 8 at the 59 th annual Sacramento Autorama in California.
And the car that was crowned the World’s Most Beautiful Custom is in Calgary this weekend. Launier’s hand built 1955 Chrysler wagon, R’Evolution, is at the 43 rd annual World of Wheels at the Roundup Centre.
This is the first time a Canadian has taken the coveted World’s Most Beautiful Custom title. Autorama show founder Harold (H.A.) Bagdasarian personally selected Launier’s car, and based his decision on style, craftsmanship and attention to detail.
Launier was born in Quebec but moved with his family to Osoyoos, B.C. when he was six years old. He bought his first vehicle, a 1951 Mercury truck, when he was 13 years old.
“I had a job mowing lawns, and I took that money and saved up enough to buy a vehicle,” Launier, 33, said during a telephone interview. “But I didn’t even have a clue how to charge a battery — I couldn’t hook up the positive and the negative terminals on a battery.”
That didn’t stop him. With the few tools he owned Launier started to tear apart the truck. He broke and stripped bolts, and says he faced a huge learning curve. But his dad knew someone who could weld, and Launier worked with him to make changes to the Mercury.
“If you get the right people to help you can make anything happen,” he says of his first build. Launier still owns the 1951 Mercury, and he drives his kids to their first day of school every year in the truck.
R’Evolution started life as a humble 1955 Chrysler two-door coupe. Launier and his build team removed the original roof and trunk and replaced it with the roof from a four-door wagon. The windshield was laid back 15 degrees further from stock, and the pillars massaged to give the car its sporty look. Inside, the headliner and cargo area are lined with wood, while the all-metal dash and centre console took hours of work to complete. Chip Foose designed the one-off wheels, and a Hemi engine resides under the hood.
According to a news release, Launier designed and built the custom car thinking about what a 1950s factory Chrysler sport wagon would have looked like, had they actually built such a vehicle.
“It is a look at where the modern day Magnum could have come from, a glimpse at the past that never was,” it goes on to say.
Launier built the Chrysler as a work of art, saying he treats an automobile as a metal canvas. That means this car won’t be used to pick up groceries any time soon.
However, Launier is bringing to the World of Wheels another of his gems, this one a two-door 1955 Chevrolet built for Calgarian Trent Bruce.
Just over two years ago Bruce commissioned Launier to construct the Chevy.
“I didn’t really have a vision,” Bruce says of what the finished car might look like — he just liked the 1955-56-57 Chevy’s and knew a custom from Launier would be hard to beat.
“I wanted a big horsepower motor, and I wanted it lowered, but I left the rest up to JF,” he says.
Launier tastefully customized the 1955 Chevy for Bruce, lowering the car and installing wide rear rubber and painting it two-tone orange and silver. Bruce will be taking his car home with him directly from the World of Wheels show floor, and is looking forward to driving it this year.
“I’ll never enter it in (another) show,” Bruce says. “My intent was not to have a show car that’s going to sit in the garage and get polished.”
Plenty more hotrods, restorations and customs are at the World of Wheels this weekend, plus Motorcycle 2009. Custom motorcycle builder Roger Goldammer, also from B.C., will be in attendance at the motorcycle exhibit all three days.
The show runs today 3 p.m. to 10:30 p.m., tomorrow 11 a.m. to 10 p.m. and Sunday 11 a.m. to 7 p.m. General admission is $14, children six to 12 $5, five and under free. Discount tickets at Auto Value are $12 and $4 for children. 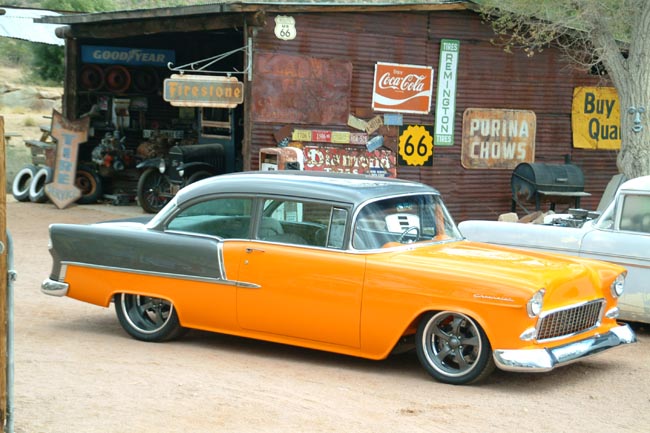