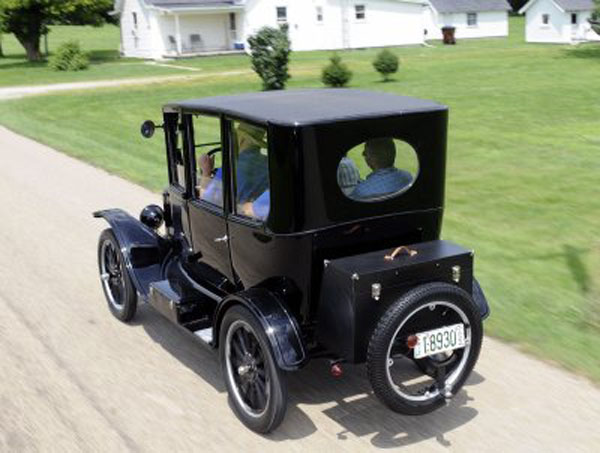 “You say you want a revolution, well you know, we all want to change the world,” sang the Beatles in their 1968 hit Revolution.
While Henry Ford and the Beatles were decades — and worlds — apart, the Model T Ford did start a revolution, and it did indeed change the world.
The famous Model T Ford, first sold on October 1, 1908, celebrates its 100 th anniversary this year. Coming from humble origins, the Model T Ford broke through socio-economic and class barriers, and is perhaps one of the most influential automobiles of all time. In fact, late in 1999, the Model T was named ‘Car of the Century’ by a panel of 133 automotive journalists who chose the Tin Lizzie from a list of 700 contenders.
“Henry Ford and the Model T revolutionized the auto industry,” says Christine Hollander, communications manager at Ford of Canada. “The Model T changed the world by providing transportation to the masses, and it introduced a new way of (vehicle) manufacturing.
“We still have that same vision at Ford: producing high quality, affordable transportation for the masses.”
While there are many events happening to celebrate the Model T Ford’s anniversary, the largest undertaking by a North American transportation museum is an interactive display at Alberta’s own Reynolds-Alberta Museum in Wetaskiwin. The Model T: How Tin Lizzie Changed the World runs until February 28, 2009 (www.machinemuseum.net).
There are 25 Model Ts on display, including ‘adapted’ cars that have been made into a snowmobile, a tractor, a T-bucket hotrod, and a racecar. There’s a Model T engine in an airplane, and an example of a repurposed T engine as an inboard boat motor by a Brantford, Ont. company.
“The Model T Ford had such an impact around the world, and we needed to do a celebration around this particular car — it was so impactful,” says David Dusome, RAM’s director and lead researcher for the project.
The museum didn’t want to present a bunch of technical or mechanical details about the Model T; Dusome says that kind of information is readily available. What RAM wanted to investigate and portray was the social impact of Henry Ford’s car.
“There were two main social impacts,” Dusome says. “First, there was the democratization of ownership, and second, there was the democratization of desire.”
Make no mistake; there were cars prior to Ford’s Model T. There were many automakers producing mechanized forms of transport — but automobiles were solely playthings for the rich. The wealthy were the only ones who could afford the hobby.
But as Dusome says, thanks to mass production of the Model T, the car became affordable.
“At that point, the average person could say, ‘I can own a car’.” And it didn’t matter where you lived — Model Ts were readily available. It could have been a small town such as High River, Alberta. Chances were good there’d be somebody selling Fords.
Now that just about everyone could afford to put a Model T Ford in front of the house, everybody wanted one — leading to what Dusome dubs the democratization of desire.
“Soon, everyone desired an automobile, and today, each of us believes we have a right to own a vehicle,” Dusome says. 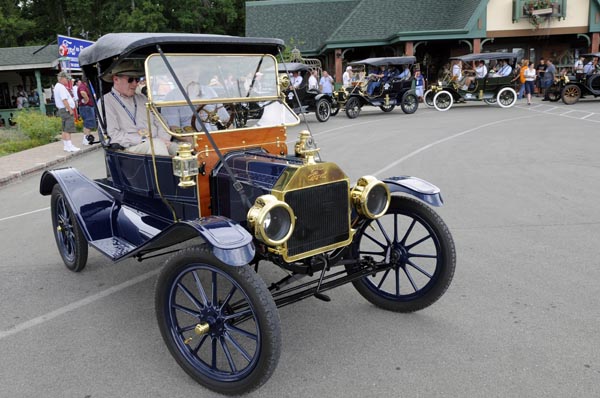 When the Model T Ford was introduced in 1908 the car cost $825. Thanks to Ford’s manufacturing efficiencies gained through the moving assembly line that price decreased to $260 by 1925.
According to Dusome, there’s a Canadian sub-story to how Ford came to implement the assembly line. Peter E. Martin of Wallaceburg, Ont. was the fifth employee hired to the Ford Motor Co., and was put in charge of Ford’s Piquette Ave. assembly plant in Detroit, Michigan in 1908. The Model T was designed and developed at the Piquette Ave. plant.
Dusome picks up the tale about Martin and the assembly line: “There’s a story of how William C. Klann was at an abattoir at the Chicago stockyards, watching a carcass move from worker to worker as it hung from a chain. The idea was if you could disassemble something as it moved along, could you build something?
“This idea of the moving chain came back to Martin, and he could have easily said ‘That’s a stupid idea’, but he didn’t. They set up a small assembly line, and experimented with speeds. That was piloted at the Piquette Ave. Ford plant, and it was spearheaded by a Canadian — Peter Martin.”
There was mass production prior to the moving assembly line — but that mass production consisted of workers and parts moving from chassis to chassis.
Henry Ford wanted the Model T to be a car for all people, and also wanted it to be durable and reliable, able to tackle the rough dirt roads of the period. The Model T Ford had a 2.9-litre four-cylinder engine mounted in the front. Producing 20.2 horsepower, the engine transferred its power to the rear wheels via a planetary gearbox equipped with two forward speeds, and reverse. Model Ts were good for a top speed of 64-to 72-km/h.
Several body styles such as Roadster, Fordor, Sedan and Runabout (truck) were all mounted on the same Model T chassis, and used the same four-cylinder motor. Ford basically set the stage for modern auto manufacturing where several different cars share the same chassis, but are completely different from each other in regards to body and style.
Model Ts were simple, and the average owner could tackle many of the necessary maintenance and repair chores. Ford of Canada’s Hollander recalls attending a Model T celebration in Richmond, Indiana where a group of four or five individuals took a disassembled T from a pile of parts to a running auto in only a few hours.
“It was a simple technology, and a technology that worked very well,” she says of the Model T. 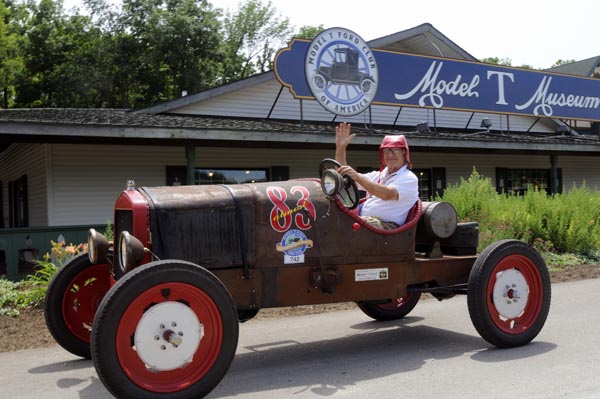 The president of the Foothills Model T Ford Club in Calgary, Glen McDonald, would agree (www.foothillsmodeltfordclub.com). Old cars have fascinated McDonald, 61, since he can remember. At 16 his first car was a 1949 Dodge, but it wasn’t too long before he owned a Model T.
“One day my uncle phoned me up, and said he’d discovered parts and pieces of an old car in an industrial yard they were cleaning up east of the city,” McDonald says. That was in 1976. What he dragged home was a 1926 Model T Sedan, but the body was so far gone McDonald turned the car into a Roadster. It took him a few years of work, but the car is now on the road and McDonald uses it regularly on annual tours.
The Foothills Model T group organizes three or four outings or tours each year, sometimes driving their Ts as far as 160 to 240 kilometres at a stretch.
“We drive the cars, and that’s how people see them – on the road. Show and shines are something we don’t do,” McDonald says.
And he can attest to how well the simple technology of the Model T actually works. He tells a story of being on a tour when the weather turned wet and he needed to get his Roadster up a muddy and damp grassy incline. A modern four-wheel drive truck was stuck a quarter of the way up, but McDonald just drove straight up the hill in his Model T.
“That”s what the Model Ts did, they were designed to go along a muddy, pot holed road. That’s when they’re in their element.”
When the last Model T rolled off the line on May 26, 1927 more than 15 million Model T Fords had been built and sold. That was an automotive feat not bested until the VW Beetle surpassed that sales figure in 1972.
Dusome says that by 1924 50 per cent of the cars in the world were Model T Fords. He adds that a modern-day analogy of that kind of proliferation and market acceptance would be akin to Microsoft computer software.
And that’s another kind of revolution — computer technology has changed the way vehicles are made, and how consumers are using them.
“The Model T and the vision behind it is part of our corporate culture,” concludes Ford’s Hollander. “The Model T is part of our heritage, and today we strive to deliver technologically smart, safe, and sustainable fuel efficient vehicles.” 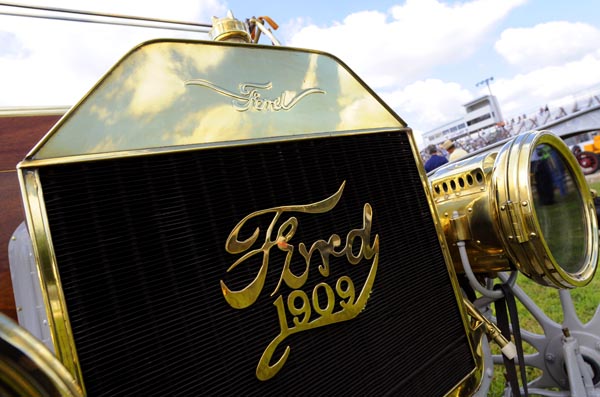 MODEL T TIDBITS
-During his research, RAM’s Dusome came across a survey performed by Robert and Helen Lynd called Middletown, in which the couple took a look at a slice of small-town Americana in Muncie, Indiana.
“They surveyed 26 car owning households,” Dusome says. Most of those automobiles would have been Model Ts. “Of those 26, 21 of (the households) didn’t have indoor plumbing or a bathtub. When asked ‘Why would you have a car and not a bathtub’, one of those being surveyed said ‘Because you can’t ride to town in a bathtub’.”
-By 1930 in Alberta 60 per cent of the cars on the roads were Model T Fords; six out of every 10 people in the province were driving the same make and model car.
-The Model T Ford is a handful to drive, literally. The spark and throttle levers are mounted on the steering column, in front of the steering wheel and are controlled by hand, while three floor-mounted pedals keep the feet busy. The left pedal is low gear when it’s pushed to the floor, neutral when in the middle, and high gear when it’s all the way out. The middle pedal is reverse gear, and the right pedal is the brake. Unlike modern cars where the brakes are at each wheel, the brake in a Model T is actually in the gearbox. “There’s an art form to driving a T, it’s different,” says T owner Glen McDonald.
-Thank the Model T for today’s huge 21-inch wheels and tires and anything that’s added to a vehicle after it rolls off the showroom floor. Over the years, thousands of Model T accessories have been sold, and it’s suggested the T spawned the aftermarket parts industry — today a $38 billion trade.
-No question about it, Model Ts were primarily black — almost 12 million of the 15 million total Model Ts were black. But, in the early and late years of Model T production, the car was produced in many different colours, including blue, red, green and grey.
-In May 2008 Ford challenged six universities worldwide to design a vehicle as revolutionary as the Model T with its attributes: simple, lightweight, practical, compelling; and priced below $7,000. Two scholarships will be awarded to the best designs for the Model T of the 21 st century — winners will be announced on Oct. 1, 2008.