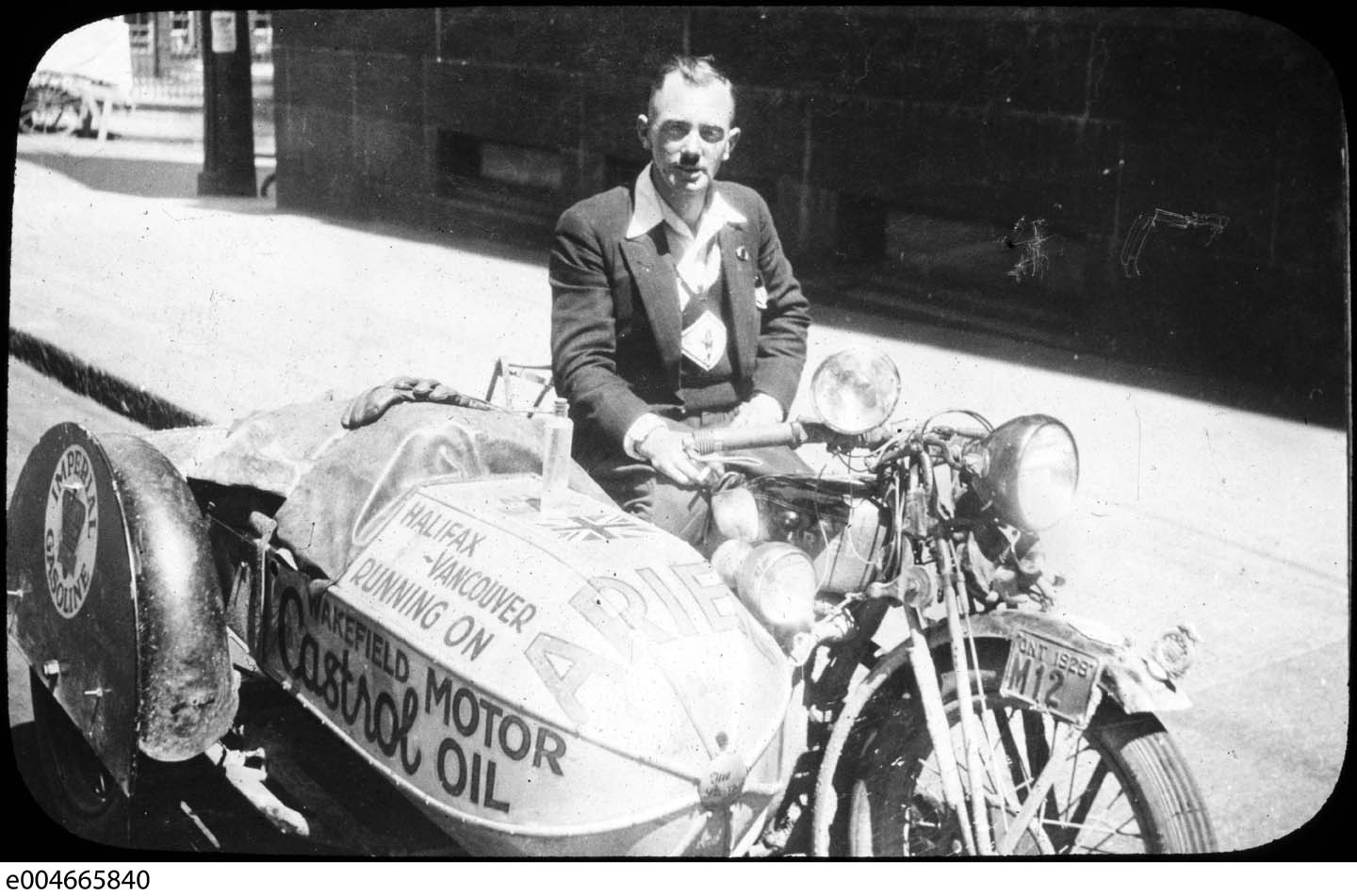 Take your semi-reliable car or motorcycle, equip it with a set of decent tires, fill your pocket with adequate cash for gasoline and it’s easy enough to drive across this country.

But just imagine doing it some 80 years ago.

Challenging, to say the least. But J. Graham Oates did it in 1928 aboard an Ariel 500cc motorcycle equipped with a sidecar. He was the first individual to pilot a rubber-tired vehicle from sea to sea – long before the Trans Canada Highway.

And that’s just one reason why Oates, a motorcyclist who hailed from the Isle of Man – an island off the coast of the U.K. in the Irish Sea – was inducted into the Canadian Motorcycle Hall of Fame last year.

Oates was something of a nomad who prior to leaving his Manx home designed and built his own motorcycle, a machine he called the Aurora. In the early 1920s he had big ambitions intending to build and market the Aurora but public interest in his product waned.

In the mid-1920s after the failure of the Aurora venture Oates raced a variety of British motorcycles in competitive events.

Then, Oates moved to Bolivia before eventually winding up in Canada.

Once here in 1928 he worked in the Canadian motorcycle industry as a salesman at J.V. and J.W. Conroy, a shop in Toronto that sold Ariel, Douglas and Royal Enfield machines.

Over a few drinks in the bar with Charles Dennis Browne, a First World War buddy and Castrol Oil rep here in Canada, Oates hatched the idea for his cross-country adventure. He’d ride an Ariel motorcycle to drum up some publicity for both Ariel and Castrol.

Sponsored by Ariel Motors and Castrol Oil, between June and September 1928 Graham rode from Nova Scotia to Vancouver on a new 497cc ‘Two Port’ single-cylinder Ariel motorcycle attached to a Canadian-built sidecar – constructed by Sturgess of Hamilton, Ont.

To do this, Graham motored along roads when he could find them, but resorted to riding hundreds of miles on the railroad tracks between Sault Ste. Marie in Ontario and Whitemouth, Manitoba – a journey that would certainly have tested the mettle of any motorcyclist.

He rode the machine between the steel rails, and every railroad tie in the track would send jarring vibrations through the handlebars and saddle. Oates persevered; moving the outfit off of the rails when a train approached and lifting it back on after it passed. On occasion the train crew had to help him get his motorcycle and sidecar back on the rails.

A front-page story in the Calgary Herald ran the next day, and it summed up his journey thus far.

And here’s the first paragraph: “Four days from Regina through discouraging prairie ‘gumbo’ and 18 days from Halifax on a coast-to-coast motorcycle tour in an effort to establish for the Ariel motorcycle the record of being the first gas-propelled vehicle to travel across Canada on rubber tires, J. Graham Oates, general manager of Conroy and Company, of Toronto, arrived in Calgary at 7 o’clock, Thursday evening, tired and dusty, but cheerfully satisfied with the results of his trip so far, having covered the 6,700 miles in 18 days.

“Mr. Oates emphasizes that Western Canada’s chief need is more and better motor roads and he heartily endorses the campaign of the Alberta Motor Association to awaken public interest in the subject.”

During his trip across Canada Oates collected letters from the mayors of major urban centres, including Toronto, Winnipeg and Regina. He visited with Calgary’s then-mayor (Frederick Ernest) Osborne and added his message to the others to be delivered to the mayor of Vancouver.

According to the article, Oates left Calgary heading west on what was the beginnings of the Trans-Canada highway to Golden where he expected to cross the Rocky Mountains once again bouncing over railway ties.

Oates made it to Vancouver just 21 days after starting the trip, and he dipped the rear tire of his Ariel in the Pacific, just as he had done in the Atlantic. He returned to Toronto via U.S. routes, and he remained in Canada for another three years.

As if crossing Canada by motorcycle wasn’t reason enough to posthumously induct Oates into the CMHF another of his contributions was the establishment of the British Empire Motor Club. Initially a motorcycle club, the BEMC of Toronto still exists, but now mainly organizes automobile races.

A great book by Manx author Bill Snelling called Aurora to Ariel is available and it details many of the exploits of Oates. According to Snelling, he is in the process of updating the book, and the new edition will include more of Oates’ diary entries and photographs. It’s a great read about an intrepid motorcycle pioneer — put it on your reading list. Click here to purchase the book. 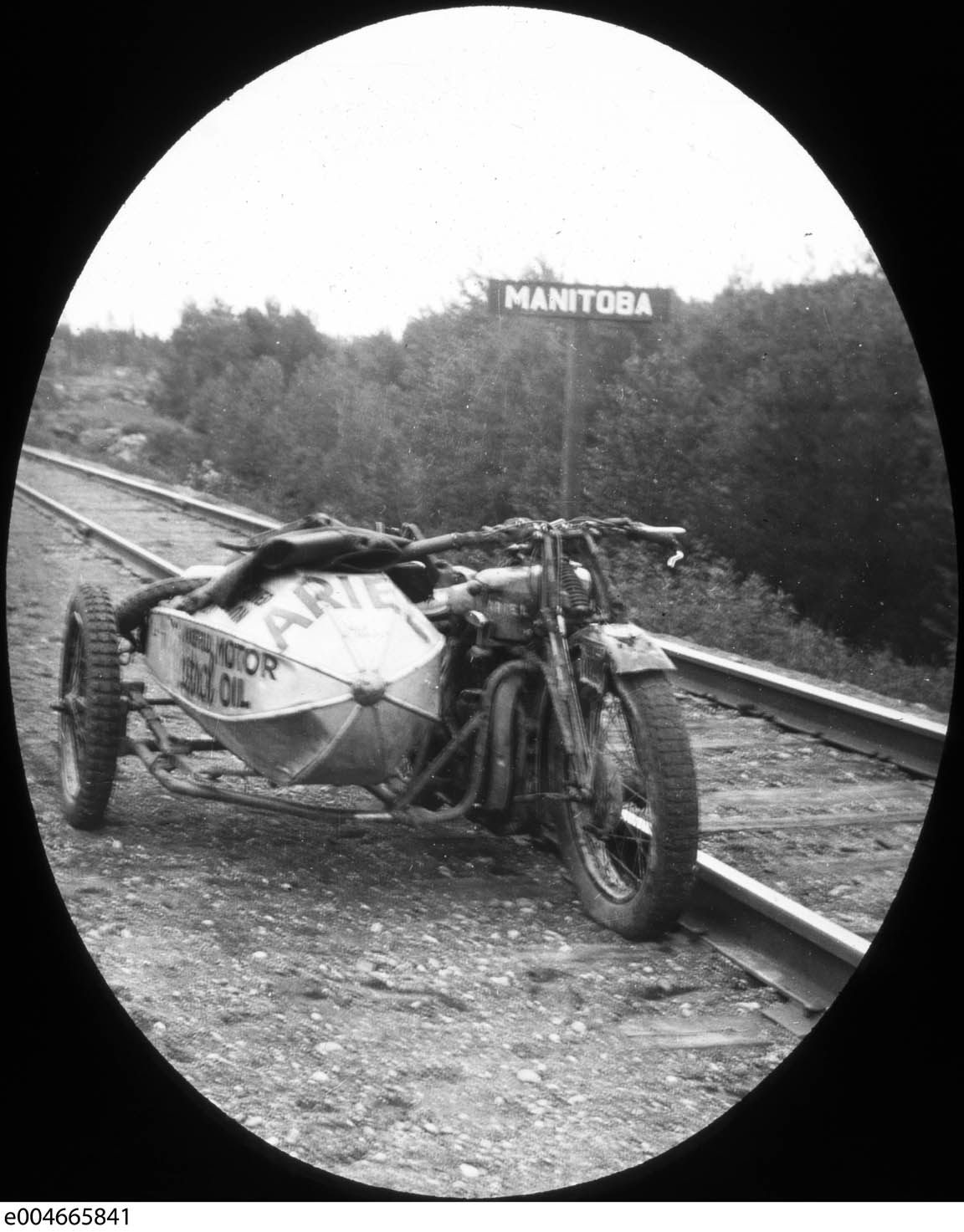