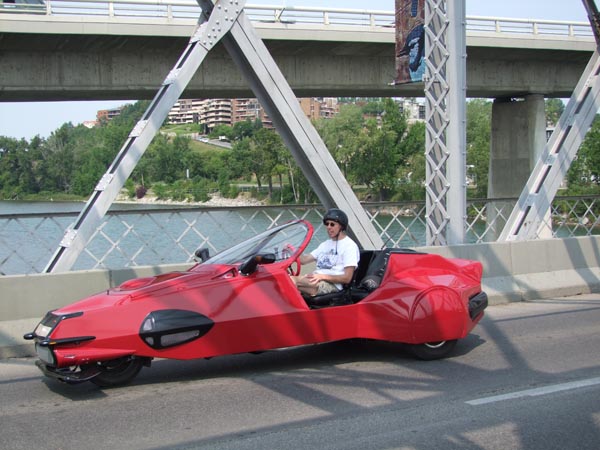 Some people move to the beat of their own drummer.

Calgary’s Lance Boettcher would be a good example.

Since high school Boettcher has had a tendency to build trikes – not children’s toy trikes – but three-wheeled vehicles powered by automobile engines.

Generally, these trikes are pretty stable thanks to a lower centre of gravity, and they are lighter than an automobile. Car-based trikes follow a simple format, and many are built around the back half of a Volkswagen Beetle, including the engine and transaxle. A motorcycle front end complete with handlebars, wheel and controls is grafted to the machine, and some form of a seat is installed.

“I started my first trike project at James Fowler High School,” Boettcher, 43, said. “My shop teacher, Mr. McPhee, turned me loose with a welding torch and an old VW. I started that trike but never finished it – it was really pretty crude.”

But that didn’t stop Boettcher. After he graduated from high school he and a friend decided they would each build a VW-based trike and ride them to Los Angeles.

“When you’re young and foolish it seems like you can do anything,” Boettcher laughed. The pair spent the better part of a spring and summer assembling their vehicles, working on them together. “We used K-mart bar stools for seats, because it looked like they would work.”

The pair did make it to California and back on their homebuilt machines – not without their share of difficulties – but nothing serious really slowed them down.

“I liked trikes,” Boettcher said. “I thought they had merit, and the idea of the three-wheeler was gelled in my mind — but the VW-based ones were always light in the front end.”

Boettcher was formulating a plan to build a much more powerful V8-engine trike, and to that end he sold his VW machine. He now had the seed money to start building a V8 trike, a machine where the engine was up front and the centre of gravity was even lower. Many others have built V8 trikes, but Boettcher said most of them still feature a motorcycle fork at the front end.

“I wanted a low-profile front end, and something that would be up to the task of supporting a V8 engine,” he said.

He had the necessary skills. While not a ticketed welder he is adept at the art of joining metal. Machining small parts and pieces was a task his neighbour performed until Boettcher got his own metal lathe. Trained in the field of aerospace composites, Boettcher spent a good portion of his career working with Fiberglass and carbon fibre.

“I’m not an accredited engineer,” he said. “But I did design and build this” 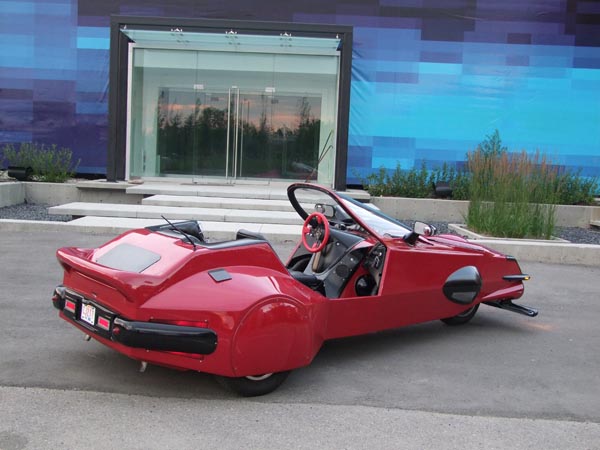 Boettcher started building his trike in 1989, and he had it registered for the road by 1997. The vehicle is built around a Chevy small-block V8 engine and GM four-speed automatic transmission. He welded up the steel frame and built the body out of Fiberglass. The vehicle has seating for two in tandem, and he even constructed a removable roof and doors. The vehicle is equipped with heat, and air conditioning.

With a background in aerospace industry it would seem inevitable that Boettcher’s vehicle have an airplane-type look about it. Indeed, there are airplane parts used in its construction.

But the one aspect of the trike he’s most proud of is the leading link, semi-elliptic front leaf spring suspension and proprietary steering system. He’s not giving away any secrets about the steering mechanism, other than to say it is power assisted and even though the vehicle is rather long at 4,470 mm it does have a tight turning radius.

“It is steered through a steering wheel, which is unusual for a trike,” Boettcher said. “Most of these are steered with motorcycle-style handlebars.”

And it is the front suspension/steering system that he thinks has merit. He’d like to sell the technology to somebody looking to manufacture three wheel vehicles.

Historically, three-wheeled vehicles have been attempted. Perhaps the most famous is the Davis sedan, built by the Davis Motor Car Company of California. There were only 17 of these three-wheeled cars produced, and in 1948 company founder Gary Davis was being investigated for fraud.

Currently, there are much more modern three-wheelers, including the BRP Can-Am Spyder and the T-Rex.

Boettcher says if he were going to start over he’d look at trying to build an electric-powered three-wheeler. In his design, the battery packs would simply replace the engine, and the electric motors would be at the wheels.

“The V8 is a very dated idea,” he said. But he thinks the core principles of the trike – less rolling resistance of three wheels, good handling, stability, and lightweight — make it an ideal platform for a future low-emission automobile. 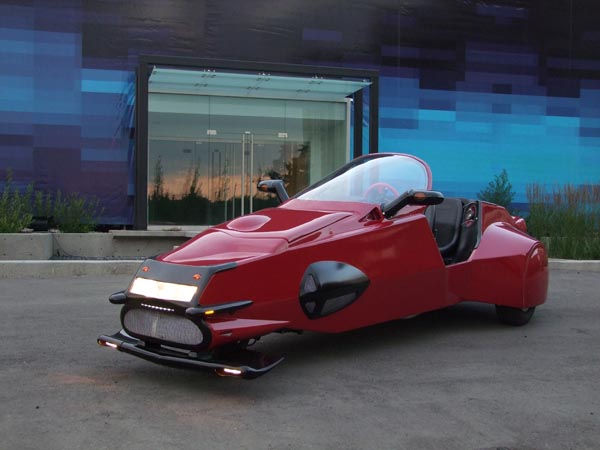