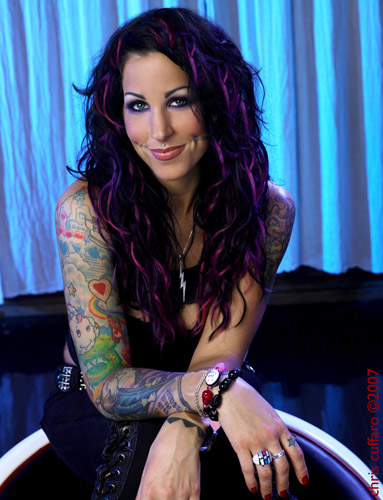 Pixie Acia is the 26-year old shop manager of High Voltage Tattoo in West Hollywood, California — the shop now known in the reality TV series L.A. Ink. In the show Acia works alongside noted tattoo artists Kat Von D, Corey Miller, Hannah Atchison and Kim Saigh.
“People believe everything they see on TV — and they shouldn’t,” Acia says of L.A. Ink, and the entire reality TV phenomenon itself. “What happens may be real, but editing can change what you see.”
Acia is a make-up artist first and foremost, working in film, fashion, and music videos. But she’s also got a soft spot for vehicles, as we learned during this interview.
Acia is putting in an appearance at the 42 nd annual Auto Value Parts Stores World of Wheels. She’s at the Roundup Centre, Stampede Park on Sunday, noon to 4 p.m.

Q: What was your first car?
A: The first car I fell in love with was my brother’s car, it was a 1973 Pontiac Grand Am. I just loved it, the way it smelled, the bench seat — and when you started it the whole car just shook.
My very first car that I drove, I’m embarrassed — it was an ’86 Chevy Nova. It would have been a lot cooler if it were a ’70 Nova.
It was the first car I had, and I drove it for two years. I covered it in insulation foam and stuck toys all over it and then some tattoo artist friends of mine airbrushed the whole thing. I also had a David Bowie Ziggy Stardust mannequin head on the car, and when I drove it the hair would blow back in the wind.
I gave the car back to my dad, and he put it a sheet over it in the yard he was so embarrassed.
Then I had a ’94 izusu 4 wheel drive, and I spray painted the whole thing again. 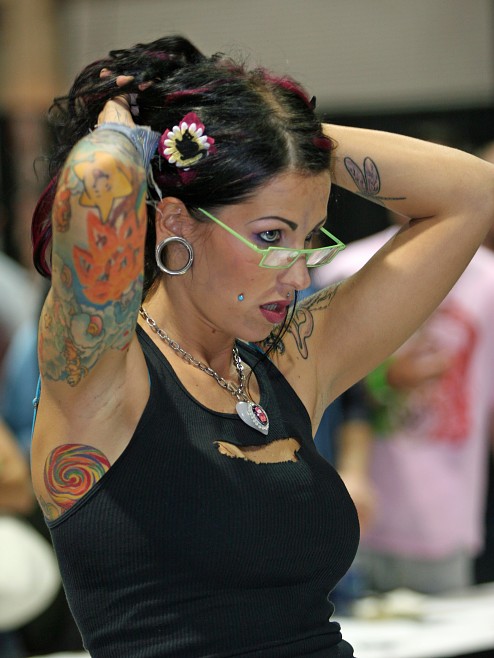 Photo courtesy Jerry Clement, who shot this photo of Pixie Acia at a recent tattoo convention in Calgary.

Q: Do you have a favourite car, and if you could have any car you wanted what would it be?
A: My favourite car is the Mini Copper.
Any car I wanted? That would be a ’37 Ford pick up. My ex-boyfriend had a ’37 Ford truck; it was a piece of crap. It was rusty in places, the side windows didn’t go up and down, but it had so much character.

Q: Would you want a Chip Foose customized ’37 Ford truck?
A: Totally, a Chip Foose ’37 would be one I’d want to have. But it would have to whitewalls, and no hood, and have a rat rod look for sure.

Q: Are you a motorcyclist? There are photos on your MySpace.com page of you in a Johnson Motors (famous, and now defunct, West Coast Brit-bike dealer) Triumph T-shirt, and a couple of you dirt biking.
A: My dad raced motocross, and I’ve been around bikes my whole life, but I just learned how to ride dirt bikes two years ago.
I’ve always wanted to be on a street bike, and I’d love an old Triumph or a Harley.
It would have to be very functional; I’d actually want to ride it. If it was a Harley, it would have to have a rigid frame, a springer front end, mid controls, peanut tank, narrow rear tire — not a big fat lame one — no chrome, wrapped pipes; I’d want it vintage and gritty.

Q: What were you doing before L.A. Ink?
A: I was a make up artist, and a waitress and a body piercer.
I went to two make up schools; one in San Francisco and Cinema Make-up school in Los Angeles. I work in films and music videos, fashion, etc., and I’m still doing that work.

Q: What’s your favourite L.A. Ink episode?
A: The one where I took Corey Miller to the Villolobos Rescue Center, the largest pit bull rescue centre in the nation. I just wanted the audience to see the rescue and see that pit bulls weren’t bad dogs, and how this woman (Tia Maria Torres) had devoted her life to the pit bull.

Q: Do you have a favourite road trip or highway?
A: I like the PCH (Pacific Coast Highway No. 1). Once you get north of Ventura County, on the windy roads, it’s beautiful. I also like driving Mulholland (Drive) or along (Laurel) Canyon (Blvd.) here in L.A.

Q: Do you have other projects or what’s next?
A: In my life, what’s next is make up to pay the bills, and animal rescue to fill and satisfy my soul. (Acia has found a space to set up her own pit bull rescue society, called Pixie’s Pit Bull Paradise, in Agua Dulce just north of Los Angeles.) 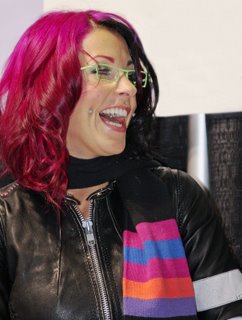 Photo courtesy Jerry Clement. This shot of Pixie Acia was taken at the Calgary World of Wheels.